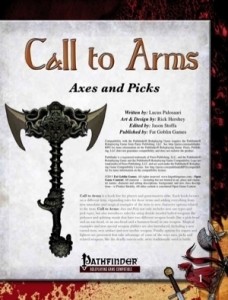 The second installment of the Call to Arms-series clocks in at 15 pages, 1 page front cover, 1 page SRD, leaving us with 13 pages of content, so let’s take a look!

After a brief paragraph of introductory prose, we are treated to a solid little introduction of the history of both axes and picks and their roles in warfare before we are introduced to the subject matter at hand – here, beginning with properly codified flint weapons, which, while fragile, may ignite flammable material when struck against metal – which is one of the trademark “Why hasn’t this been done before?”-moments I love in the series. Similarly, I am pretty sure that more than one GM out there will appreciate the rules for weapons with double heads, allowing for the free action switching of them. If you’re like me and contemplate converting Age of Worms, you’ll certainly appreciate these rules for the signature weapon of servants of dread Kyuss.

Alas, there is a sensible modification that is rather problematic: Alternate Axe-bits make sense: They allow for the inexpensive addition of material-based weapon properties. For campaigns à la Ravenloft that sport the requirement for obscure materials to bypass some sorts of DR, this makes sense. At the same time, incorporating e.g. adamantine does feel problematic to me, since adamantine’s price is carefully balanced versus the significant powers it grants. Material bypassing DR =/= material bypassing DR and while the scaling price does still reflect this, it imho does not do so in a sufficient manner for the more powerful materials.

A total of 12 different simple weapon axes and picks are provided, from the awl to the Alpenstock (originally created to serve as a climber’s tool, literally meaning “staff of the Alps”), which helps with climbing – though the bonus type it conveys should probably be an equipment bonus. But that’s just me being a nitpicky prick. A total of 16 martial weapons (including aforementioned climber’s tool) are included within, as well as 9 exotic weapons, with the ricocheting gnomish throwing picks being among the more interesting ones, while e.g. the dhampir maul, is slightly problematic: The weapon is a big hammer with a slot for e.g. a stake to be inserted. So far, so good, right? Alas, the stake-part is fragile and the notation of damage is 1d6/2d6, which is slightly uncommon.

Now this is a cosmetic glitch, sure, but I do have another issue here: The finer balancing of some of these weapons seems to be slightly off. Take the executioner’s axe: At 40 gp, it offers a base damage of 1d12, Crit 19-20/x3 and both the deadly and fragile quality – compare that to the dwarven longaxe, which costs 50 gp and offers a base damage of 1d12, Crit x3. Personally, I believe that the extended crit-range is more powerful than just the addition of the fragile quality offsets. While the weapons generally are on par with established ones, they sometimes slightly overshoot their targets – not by much or to a game-breaking extent, mind you, but still.

Regarding internal consistency, there are two entries among the weapons that are unlike the others, two entries that do not belong – the stiletto and misericorde. The latter being the “Mercykiller”-blade used to grant mercy to the mortally wounded – a long, narrow knife, thin enough to fit between the plates of armor. With the ample variants of axes, I don’t really get the inclusion of these weapons here, but oh well – once again, I’m complaining on a cosmetic level. That being said, I do believe that the latter represents an obvious missed chance to grant the blade more of a mechanically unique identity by e.g. facilitating coup-de-grâce-attempts. (Granted a magical misericorde later provides that when used versus undead, but still… Oh, and the magic weapon is imprecise in that it does not state whether rejuvenation or similar abilities fall under the healing-prevention of undead finished with the blade.)

Reinforced sheaths make sense to me – these sheathes can turn picks and axes into a bludgeoning weapon, which makes sense – the item also codifies better nonlethal damage dealing and the new, sheathed properties of the axe/pick – kudos! On the magical side, the pdf introduces two new special weapon abilities: At +1 bonus, hewing weapons add +4 to CMB to sunder attempts and the +3-equivalent felling property increases the damage output of the weapon to be equivalent to the size of the creature targeted – but only for one attack and the damage-die never decreases for fine/diminutive. This is problematic in three ways: 1) It increases the “one hit kill”-factor that is anathema to epic battles. 2) Weapon damage die increases are pretty opaque, much more so for weapons of larger sizes – damage progression-tables would have been greatly appreciated. 3) For +3, 1 hit damage-increase, thereafter the weapon does not convey this bonus against the creature for 24 hours, feels very punitive. All in all, not a fan in the slightest of this one.

The pdf also contains 9 specific weapons spanning the price-range from 8K gp to 103,018 gp. The specific weapons are solid, though not always brilliant: Take the axe of fire and ice: One head +1 flaming burst, one head +1 icy burst (both not italicized) – and that’s it. No additional trick, no unique feature…boring. Speaking of minor formatting hiccups – the forester’s axe’s one superscript property lacks the superscripting formatting for an unsightly “UE” in addition to lack of property italicization – though its doubled function as a renewable rod of flame extinguishing is at least not that bland. The Jack-of-all-trades, a poleaxe, is more interesting: Each head of it is separately enchanted and crafted from a different material to make the weapon feasible against all kinds of threats and the weapon even has the information for its non-magical price…but, alas, it lacks the precise damage-stats for each head: There are a lot of axes, spears and the like and while I love the idea of the weapon, its execution, alas, renders it an inoperable guessing game as provided.

On the plus-side, a weapon made to break objects, doors and locks is neat. Somewhat oddly misplaced herein: The thunderstone arrowhead is always “formed in the shape of handaxes or arrowheads” – does that mean there are handaxes with this property? This does contradict the +1 shock arrow base item, though…which brings me to the second entry, which covers the handaxe version…and its language is, alas, just as confused, referring to arrows and the like. Worse, its effects are that “powerful magical lightning strikes the ground” – does that mean lightning bolt at the item’s CL? Would make sense, but the bolt strikes from above, so is it call lightning? I have literally no idea how this is supposed to work. On the plus-side, I *REALLY* love the magical sheathes provided here, conferring e.g. cold iron’s benefits to the weapon. Surprisingly, the wording here is more precise. A cursed sheath that corrodes weapons is also interesting.

The intelligent axe Old King Harold, bane to orcs and goblins, is a rather neat one and we also get the stats for the mythic axe of Perun that can control weather via mythic power and call down lightning (here with the proper spell) in these called stormfronts – odd, really: How a more complex item works, where a simple one stumbles. On the downside, the lack of italicization and superscript-errors make complex items like this one harder to grasp than necessary. The indestructible spike artifact is a brutal spiked maul and conveys iron body on the wearer – BRUTAL!

There also is a new rogue talent that allows for the exchange of sneak attack damage die to reduce armor bonuses – basically, trade damage for precision. An okay talent. The feats are interesting: Using disarm to negate shield bonuses…though the alternate use, which lets you make “opposed Strength-checks” to make foes drop the shield feels wrong – opposed Strength-checks usually do not happen directly in battle; PFRPG tends to use CMB/CMD instead and the d20 vs. d20-base means that the roll is very swingy. Not a fan of this component of the feat. The second feat allows you to perform AoOs versus attacking foes when fighting defensively or in total defense, potentially disarming them. Oh boy, this one – I like the intent, but the feat “gives you an automatic attack of opportunity” – which is not default wording and could mean that you can exceed AoOs per round. I’m not sure how this works.

The pdf concludes with a solid write-up of Craft (Knapping) for the manufacture of flint or obsidian weapons and items.

Editing and particularly formatting need some work: The lack of italicizations of certain components and amount of superscripts not superscripted is pretty jarring. Layout adheres to Fat Goblin Games’ two-column full-color standard and the pdf sports nice full color artworks. The pdf has no bookmarks, which constitutes a comfort detriment.

After the disappointing first installment in the series, I kept my distance to the series, mainly since I didn’t want to bash Fat Goblin Games, then a totally different company, quality-wise, than today. Imagine my surprise when current Call to Arms-books actually were rather imaginative, inspired and cool….which made me wonder: When exactly did the series and company become better in such a short time? Well, I returned to Call to Arms to take a look at what Lucus Palosaari has crafted, to witness the growth of the author, if you will. So yeah, this is why you’re seeing a review for this old pdf now. To get that out of the way: This was obviously before editing and formatting reached the current level, so in that regard, the pdf isn’t that great.

Similarly, rules-editing is not yet as tight as in later installments of the series and there are quite a few slightly problematic components herein, some that simply don’t work. At the same time, this already displays the strengths later installments exhibit – there are some true “Why hasn’t this been done before?”-moments to be found herein, which provide equilibrium for the flaws. Ultimately, this is a mixed bag, slightly on the positive side of things, and hence my final verdict will clock in at 3.5 stars, though I will round down for the purpose of this platform.

You can check out this nice, if not perfect little book here on OBS and here on d20pfsrd.com’s shop!