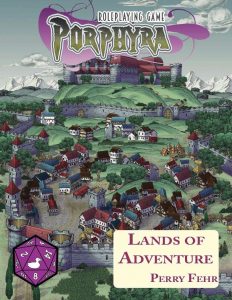 This supplement clocks in at 24 pages, 1 page front cover, 3 pages of SRD, leaving us with 20 pages of content, so let’s take a look!

So, first things first: This is a supplement for the Porphyra RPG, the continuation of Pathfinder 1’s rules that is currently being designed by Purple Duck Games. The Porphyra RPG seeks to streamline a few aspects, but otherwise has the ambition of being 100% PFRPG 1 compatible. Thus, while I will designate Porphyra RPG books as such, you should have no problems whatsoever using them in conjunction with PFRPG. That being said, a couple of formatting conventions are different. As per the writing of this review, magic items are, for example, no longer italicized. I am not the biggest fan of these formatting decisions, but since the game as of now is WIP, I will not penalize the book for that.

All righty, that out of the way, let’s take a look! We begin this supplement with the lay of the vagrant, a semi-divine traveler, a mystical figure that travels the lands – more of a plot-device than a creature. Here, this acts as a framing device of sorts, and after this, we get a massive list of settlement qualities and disadvantages. Settlement types by population are codified properly, and statistics are similarly tightly-presented in their own table – one glance, and you’ll see that a small city will have 4 qualities, and base limit/purchase limit, magic items and spellcasting available – all in one table. The disadvantages include, just fyi, asylums staffed by clerics with the Madness domain, which may cause odd lore to be present. Famed breeders may mean that e.g. hippogriffs or the like are available – you get the idea. The presentation here is tight and succinct.

After presenting these collated rules, we are introduced to unique sites across Porphyra, which as a whole could easily be plugged into most fantasy campaigns: We can visit, for example, Calim, the city of coins. These settlements btw. not only come with full statblocks and a brief description, as well as notable NPCs mentioned – each of the settlements is designed with immediate usefulness in mind. To take aforementioned Calim and quote from the text: “The party has signed up for the biggest economic makeover of the decade, as the city of Calim, in the economic battleground of the Trade Consortium of Blix is hiring “Associates at Large” to get the city up to code for the chance to become City of Capital among the Floating Syndicate Holds.[…] At least that’s what the Administrators hope. In your bright red shirts (Redshirts?) your party will put out fires real and metaphorical in the showdown to earn credits and prestige in the City of Coins!”

Literally being Redshirts? That’s foreboding, and indeed, the quests noted are nothing to sneeze at. You see, these settlements come with suggested quests, basically detailed adventure hooks, for low, mid and high levels. In the latter case, we’d have, for example, an infiltration into a black site political prison!!

These angles go far beyond what you’d usually see, and indeed, could be taken as campaign seeds. The second settlement’s angle would be that the PCs have been cursed with light blindness or rather fatal sunlight allergy, and thus banned to Creeper’s Rift below the mining city of Argentum! Now if that isn’t a cool misfits-hero angle, what is?

Treadwell, the city of traitors, has the PCs start with an innovative item in a land of high sorcery and magitech, seeking their fortune; and yes, 6 different such traits are presented. Bonus types are not codified here; not sure if that will remain so in the final version. A perfectly functional construct-shutdown gauntlet is also included here. Looking for fantasy wild west? Check out Dupressix! (And if you need a couple of modules with such a theme, take a look at SagaRPG’s offerings…one minor reskin, and you’ll have them combined.)

Another cool baseline/campaign seed would be exemplified by Thunder Keep – this city is actually a barbaric lizardfolk settlement, as the PCs kick off this campaign as folks stranded on an isle in the Rainbow Islands archipelago! Really amazing would be the Steaming Isle hook: Porphyra, the patchwork planet, has regions and climates separated by seams of porphyrite borders, which carry mystical and magical significance. Well, one place is the border between a tropical and arctic climate! Come on, that is really unique and something I have never seen done before! I’d totally play in a campaign where those and their cultures clash! This section is btw. supplemented by the black ice material.

Prefer a gritty, borderlands/swampy-type of scenario? Then check out Camp Sowmoor! Oh, and of course, good ole’ Freeport if part of Porphyra, so yeah – the classic city of pirates does get its own, distinctly Porphyran version here…so if you never had a chance to run the classic modules, it’s time to dust them off. Just steer clear of “Black Sails over Freeport.” That one was really, really atrocious.

But perhaps you’re in the mood for some good old ruin-looting? Then, you’ll want to explore the Ghadab Plateau and its ruined cities, setting forth on your expeditions from the dwarven colony named Shankil’s Pleasure…get rich or die trying, right?

Editing and formatting are hard to judge as of now, at least regarding their rules-conventions and adherence to them; pertaining the formal integrity, there is nothing to complain. Layout adheres to a 2-column b/w-standard with purple highlights, rendering the book pretty printer-friendly. The pdf sports some rather nice full-color artworks, and comes fully bookmarked for your convenience.

Perry Fehr knows how to write amazing cultures and environments, and indeed, not one of the campaign hooks and settlements left me bored; not one of them is a been-there-done-that option. Instead, we get surprisingly interesting campaign seeds herein, and while all classic genres are covered, the supplement manages to add unique twists to them, which makes them feel unique, fresh and interesting. If anything, more than one of these places actually succeeded in making me crave an adventure or series of fully fleshed out adventures in the regions. Porphyra has vast potential as a setting to accommodate a wide variety of playstyles and outré themes, and this book embraces them wholeheartedly. Now, while I would have loved to see a bit more supplemental material or fully fleshed-out stats, I get why this elected to focus on the themes. Still, if anything, this book and its focus on ideas, rather than just a ton of crunch made me actually really excited about the future of Porphyra. The angles presented within certainly all would make for cool campaigns! Hence, my final verdict will clock in at 5 stars.

You can get this cool collection of settlements and campaign seeds here on OBS!

You can check out the Porphyra RPG WIP here on OBS!

A playtest adventure can be found here!

The favored class option discussion pdf can be found here!