Jungles of the K’naanothoa (OSR)

Jungles of the K’naanothoa (OSR) 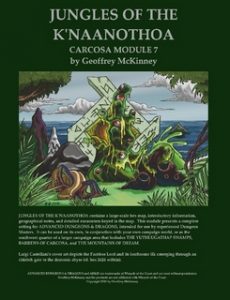 This hex-crawl clocks in at 16 pages, minus one page overview of relations with other hexcrawls in the series and a paragraph of editorial, leaving us with roughly 15 pages of content.

Okay, so I’m gonna slightly alter my format for this series: As many of my readers out there, I was duly impressed by Geoffrey McKinney’s Carcosa-book; it left me wanting more; more depth, more weirdness. Well, after a friendly hint by one of my patreons, I started searching the interwebs and found on the author’s lulu-page not one, but four different hexcrawls (or a planned series of 8) depicting the lands of Carcosa. Well, obviously, I got them asap.

All right, all of that out of the way, let’s start with the third of these, The Jungles of K’naanothoa! From here on out, the SPOILERS reign. Potential players should jump to the conclusion.

So, this would probably be the equivalent of the land that connects North America with South America – in rough structure and climate, at least; there are several islands depicted (including one that may coax its inhabitants into drowning themselves, degenerate Cthulhu-cultists, etc.) – in the ocean, there is even a raft to be found, etc.

The PCs can find a strange place that provides windows into the past of untold aeons…and indeed, there is knowledge to be found. There is, for example, a cave, where a potential sorcerous and horrific origin of man can be unearthed; there is a giant skeleton, which, when fed properly, regenerates into a living giant for a while, before turning into dormant bones once more; there is a gate into the abyss, frequently visited by none other than Jubilex…and there are settlements.

A difference and what sets this apart in comparison to other hex-crawls in the series, would be that the weird reward ratio and wondrous aspect is imho higher. It also has a very strong cultural leitmotif: beyond the carnivorous plants you’d expect and the apemen, you can find the dread island that is the home of Cthuga – the dread Great Old One is worshiped by the viler of the beings here – and breaking the truce during the regular mass sacrifices may be an amazing main goal for PCs that are on the good side of the spectrum. Speaking of which – here, being valiant does have a few perks…though, well, you may well incur the wrath of a nigh-unstoppable monstrosity…

Geoffrey McKinney’s excursion into the jungles is briefer than the previous two modules, but it is tighter; it feels more like a locale you can run rather smoothly; it has both local events and more global ones that influence the region…in short, it is a well-made hexcrawl and ranks among my favorites of the author’s work. My final verdict will clock in at 4.5 stars, though I can’t bring myself to rounding up for it.

You can get this neat hexcrawl here on lulu!