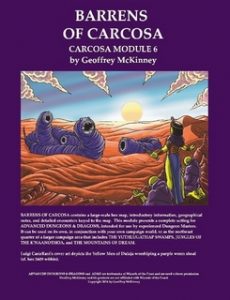 There is another aspect you should be aware of: See that cover image? It’s the only graphical element you’ll find in the whole module-series. There is no interior art, not even a pretense of a basic form of aesthetically-pleasing layout – the modules, basically, are blocks of text. While Hex-headers have thankfully consistently been bolded, and spells are italicized, you e.g. won’t find complex spell-lists – much like the hardcover setting by LotFP, this is basically an overview and toolbox for experienced GMs to expand. The back cover sports the respective hex-crawl map, with per se solid cartography by Dion Williams. There are two problems with the maps that extend to all the maps in one degree or another: Landmarks are noted with graphical elements and so are settlements; there is no redacted, player-friendly map to hand out to the PCs. There also is one annoying component: The hex-numbers and borders are WHITE. While this works with e.g. green swamps, as soon as you try to decipher white numbers on a light blue or yellow background, it becomes annoying. Since this module takes place mostly in deserts, that aspect is particularly annoying this time around.

All right, all of that out of the way, let’s start with the second of these, The Barrens of Carcosa! From here on out, the SPOILERS reign. Potential players should jump to the conclusion.

So, first thinsg first: Unlike the trip to the Yuthlugathap Swamps, we dial up the weird (thankfully!) in this hex-crawl: We get edible gungus forest, 3 millimeter tall red men; we can meet the green encephalitic thing that is called the Logician – which ponders the stark, merciless truths of existence…with potentially lethal consequences for students.

We can find Carcosans putting their own spin on a quasi-French 14th century culture, a blatant homage to the horror-cult-classic-series Phantasm, beetle-farmers, deadly animals, a faceless sphinx devoted to Nyarly…There is a master of strange poisons for those that can pay the price; there are former space-faring vessels now inhabited by primitive folks; devotees of might makes right fight those devoted to science and we can find beings of the Great Race frozen in time.

A whole village turned into white lotus automatons, towns that exhibit strange sexual dimorphisms, clones controlled by a hidden extraterrestrial entity…and of course the Carcosan staples of weird Shubby-spawns etc. can be found.

Day and night. That’s how this module diverged from the swamps: Here, Geoffrey McKinney turns up the unapologetic Gonzo-aspects of Carcosa and the book is better off for it; this hex-crawl is diverse, creative and provides a wide variety of unique and interesting encounters that range from the horrifying to the wondrous, representing some of the finest individual hexes he has penned so far. If there is one thing I would have loved to see, it’s that there is not much to develop beyond the small stories – while sometimes 2 hexes or so tie together, there are no obvious larger angles; these have to happen in play. As such, I consider this to be a good, if not perfect offering. My final verdict will clock in at 4 stars.