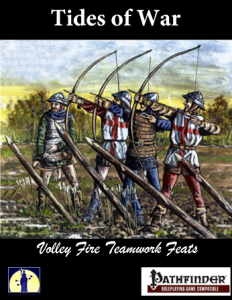 This installment of Flying Pincushion Games’ inexpensive Tides of War-series clocks in at 6 pages, 1 page front cover, 1 page editorial, 1 page SRD, leaving us with 3 pages of content, so let’s take a look!

After a brief introduction to the matter at hand, we dive right into the respective feats – but before we do, let’s recap Volley Fire, shall we? Volley Fire provides the following benefit:

You gain a +1 bonus on ranged attack rolls for each ally with this feat who made a ranged attack since the end of your last turn against a target within 15 feet of your target, to a maximum of +4. These allies don’t provide cover against your attacks.

Oddly, the pdf further limits this with the following requirement: “All characters using the teamwork feat must be within 5 ft. of another ally also using or being granted the use of the same teamwork feat.”

Okay, so what do we get?

Well, the first feat I’d like to talk about would by Clustering Volley: When firing on the same foe using Volley Fire (not properly capitalized in the pdf), one should “total the damage in the round before applying damage reduction.” Okay, I get what this is supposed to do – HOWEVER, the feat also states that “all allies benefiting from this feat use your initiative score to determine when they act in a combat round when you actively use this feat” – which exceeds the vanilla benefits of the feat, allowing groups of beings to cheese initiative. This also opens a huge can of worms that remains RAW unsolved – do they still act on their own initiative score? Do they retain yours? I*get* what this does, but rules-language-wise, this needs some polish…which I hope it’ll get, for I *like* what the feat tries to do!

The second feat directly requiring Volley Fire would be Dodge This: “Instead of resolving attacks directly those using or benefiting from this feat may opt to attack an area. The group may target 1 5-foot square for every three attacks they make in the round.” – and then the feat goes on to provide a conservative, solid damage-array and scaling DCs for such area-attacks. DCs? Yep, resolved versus Reflex saves. Interesting idea…but why not write “one 5-foot-square” to avoid possibly misreading the rules here? What does “resolving the attack” mean here? When doe the archers fire the volley? Okay, that one is answered: “caller’s initiative.” Does that change initiative? Require readying/delay? How does that work?

There is actually a feat herein that requires no Volley Fire – Call the Firing Line: This lets you use a standard action to grant allies half your Cha-mod as a morale bonus to their ranged attack rolls, with Profession Soldier’s skill modifier (NOT ranks…BONUS…this is A LOT of allies…particularly since this HAS NO RANGE.) denoting how many allies can benefit from it. Once again, allies use your initiative score to determine when they act when you use this feat. The feat also lacks a duration for the bonus, though I assume “1 round” or “until your next turn.”

Okay, so that would be the vanilla Volley Fire-feats – the pdf also sports a follow-up-feat to Volley Fire: Group Fire. As a free action, you and your allies draw and load, aim and fire as a team, granting +1 to damage to ranged attacks, +1 damage per +3 archers after the second. Unlike Volley Fire, however, this one, once again, has the allies use your initiative score”-clusterf***, which further limits its usefulness. The feat has an Improved Group Fire follow-up feat, which paradoxically works better – you gain the benefits of Group Fire to all ranged attacks made during a full attack action. The special line clarifies, that you still only get the bonus to a number of attacks equal to the group -which botches the feat. Worse, it suddenly states that regular Group Fire allows for just one attack as a full-round action…WHICH IS WRONG. Neither Volley Fire, nor Group Fire mention this in any shape, way or form.

There are three additional feats that build on Group Fire – Arcing Fire, which reduces the benefits of cover regarding AC and Ref-saves and , if used in conjunction with Volley Fire, it also applies to displacement (not properly italicized in the pdf) and other miss-chance-granting magical effects…”with the second volley.” WTF is that supposed to mean? I literally do not get how this is supposed to work. Gauging Shot is per se cool: Take a penalty to fire one shot at the enemy – if you hit, all other members of your Volley or Group Fire get +2 to atk and damage. Weird: “if the attack fails, they still learn something and gain a +2 to only attack rolls.” In addition to the original +2 bonus? Or how is this supposed to work? IS the bonus applied to subsequent attacks of allies? No idea. The final feat, Pincushion, adds cumulative -1 penalties per attack to the Fly check of a flying creature – failure means the flyer falls. All right, I’ll play! When do the penalties cease? End of the round? Not at all? The feat calls for a Fly check for each ranged attack, with penalties stacking per hit. How in the name of 9 hells do you count that? Roll all attacks first? Or begin with one attack, then the next, as usual? What’s the DC of the Fly-check? No idea.

Editing and formatting are not good on the formal level; on the rules-language level, they’re worse. Layout adheres to Flying Pincushion Games’ nice two-column, full color standard and the pdf sports nice, thematically fitting stock art. The pdf has bookmarks, but they don’t work as intended – at least that is no biggie, since the pdf’s brevity means that we don’t need them.

Frank Gori’s volley archery feats, as much as I’d like to say anything but that, are a hot, steaming mess. The simplicity of Volley Fire is what makes it work – whereas this pdf’s feats fail to grasp that. The intent here is obvious: Allow for simultaneous, efficient attacks via many archers/crossbowmen etc. – and I *LOVE* this, idea-wise. I really think that we can use some serious tricks in that niche. The concepts of the feats, then, do a great job of covering what I’d like to see done in the niche – you can discern the ideas, the intent…and, for the most part, how the feats are *supposed* to work. Now here’s the problem: They don’t. One crucial issue of this pdf is that it tries to codify a simultaneous attack of a multitude of characters, but lacks the rules-savoir-faire of making it work, instead turning the whole feat group into a horrid mess of ambiguity, question marks and frustration.

If you have some teaching experience – this is the equivalent of grading a paper, where you see the effort and ideas and like them…but that’s about it. All the other components are flawed, based on problematic premises and lack the necessary precision and care. The effort is here, the ambition commendable – but that’s unfortunately all I can call positive about this book. The literally only reasons this is rounded up from my final verdict of 1.5 stars are the complex subject matter this tries to cover and the low price point -which means that GMs that can hand-wave the rules-issues behind the screen can get some use out of this, once they know how these feats were supposed to work…or, you know, you could simply get Companions of the Firmament. Just sayin’.