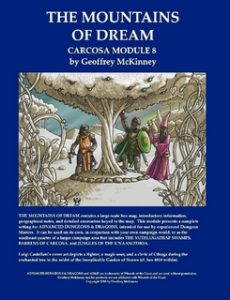 This hex-crawl clocks in at 20 pages, minus one page overview of relations with other hexcrawls in the series and a paragraph of editorial, leaving us with roughly 19 pages of content.

All right, all of that out of the way, let’s start with the third of these, The Mountains of Dreams! From here on out, the SPOILERS reign. Potential players should jump to the conclusion.

One look at the hexcrawl map may disappoint some of you: Only the upper fourth of the map actually contains land – the rest is the endless expanse of the K’naanothoa Ocean. This is really deceptive, though, for this Carcosan hexcrawl has the highest density of evocative things to find: There are very few dead hexes herein. There is also a more diversified array of themes here: Instead of the constant barrage of dinos, Shubby-spawns etc., we get variations – you see, there are actually a couple of benevolent places here.

The influence of the Elder Gods is still felt – atop the mysterious plateau of Leng, a truth remains to be found; various lamaseries peddle their own brands of mystic truths; there is a hidden paradise to be found: Mt. Kadath looms…which brings me to one aspect: Many serious critics of literature consider Lovecraft and his heirs to be best when they embrace the true weirdness. This module embraces this aspect wholeheartedly and manages to provide wonder and beauty alongside Carcosan horrors. There is beauty galore to be found in these mountainous regions.

Massive cities may be found within this region, for example mighty Kadatheron – a gloriously beautiful metropolis, that strangely seems to sport a unsettling tradition regarding the fusion of men with the Pharos. There is a town, rendered infertile, that now employs a disturbing fertility rite using a bronze serpent and strange orgies to counteract the curse of darkened stones. Within the ranges of these mountains, a garden of marble-like stone can be found, where a goddess offers a risky wager for those seeking fortune and fame. Incense groves can be found…and there is an imprisoned white thing – it heals when prodded and the blood that gushes forth can be used as oil, providing a strange and inspiring local economy.

There are all the trademarks of Carcosa here, but they are combined with a truly inspiring diversity that breathes wonder in the best of ways; it almost feels like the author has synthesized the aesthetics of Carcosa and the Isle of the Unknown, with the exception that he uses infinitely more and varied wondrous components.

This hexcrawl is pretty much the best thing by Geoffrey McKinney I’ve read so far; it blends the wonder of the “Isle of Wonder” with Carcosa; it is deeply entrenched in a blend of sword and sorcery aesthetics, while fusing them with Carcosa’s unique identity. It manages to provide more diversity and creativity in settlements, spawns, etc. than not only in previous hex-crawls in the series, but as a whole. The vistas depicted herein inspired me – I could picture their hazy, fragile beauty; sense the uncanny strangeness underlying everything. The leitmotifs of the region set it apart; the strange resources and places provide enough small and big stories to develop – in short, this is pretty much an excellent example of what the series can be. If you can look past the formal shortcomings of the series, then at least check this one out – if you’re looking for a truly wondrous mountainous range, this delivers in spades. My final verdict will clock in at 5 stars + seal of approval.

You can get this great hexcrawl here on lulu!