Letters from the Flaming Crab: Inspired by Heraldry

Letters from the Flaming Crab: Inspired by Heraldry 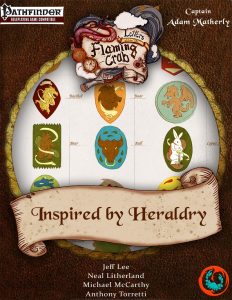 This installment of the Letters from the Flaming Crab-series clocks in at 19 pages, 1 page front cover, 1 page editorial, 2 pages of SRD, leaving us with 15 pages of content, so let’s take a look!

We begin this pdf, as always in the series, with the well-written correspondence from the planes-hopping UCS Flaming Crab – this time in the guise of a rather personal letter that mentions the strength a coat of arms brought to a member of the crew…and indeed, thus established is the leitmotif for this one’s installment, which first begins with a small bestiary-section of creatures influenced by coats of arms, and yes, they come with a gorgeous b/w-artwork depicting them. So, what do we get? Well, at CR 1 the spitting and stubborn allocamelus (smaller, camel-like creature with a donkey-ish head), the CR 8 biscione with its barbed scales and coiled jumps – basically draconic serpents. The enfield, at CR 2, would be a wolf with a fox’s head and front paws of talons can sense allegiances and at the same CR, the lepus hostili would be a killer bunny that can deliver kicking trips and wield Medium weapons. Yeah, pretty cool! The monster-hunting, loyal talbot hound (CR 1/2) and the CR 4 goat/antelope-hybrid Yale, with its rotating horns, complement this cool mini-bestiary.

Beyond the bestiary, we are introduced to heraldic feats – and these are intriguing: They are mutually exclusive, so you can only get one suite of these feats, which is important to keep in mind. These can obviously be easily rebranded for noble families as well (If Birthright/GoT or gothic horror is your theme of choice, then particularly cool!) and there are rules that enhance Diplomacy among those that have the crest feats. They also come in sequences of 3, somewhat akin to Style-feats: The first is called “Coat”, the second “Crest” and the third “Achievement.” A total of 17 such feat-sequences are provided, totaling 51 feats. And yes, visual representations of the respective feats are provided. So, are they any good?

Well, one thing you need to be aware of is that there are per-encounter feats; The Allocamelus lets you reroll saves vs. mind-affecting effects, with the sequel adding a +1 untyped bonus to atk and damage versus a creature that tried to affect you for the duration of the encounter. At this point, you all know my rant regarding how an encounter is not a proper duration. There is a reason Dreamscarred press codified per-encounter durations with an encounter-exceeding cooldown/duration in proper time. That being said, this is a hiccup that may not necessarily be something you consider to be problematic, but some of you out there have the same tendencies as I do, so yeah. Not all such feats are using such mechanics, btw. Thematically, sometimes the leitmotif could be a bit more pronounced: Basilisk Coat, for example, unlocks both Stealth and Perception as class skills and the feat also nets a skill bonus to both. The sequel feats, then, instead of further emphasizing these, enhance fascinate and provide an SP of a single-target hypnotism. The bear-feats, for example, enhance Intimidate and saves vs. feat, but then proceed to enhance saves vs. poisons/disease and then grant DR 2/piercing. So yeah, the leitmotifs generally kinda make sense, but do not build upon each other, which constitutes a crucial difference in comparison to most feat-chains I’ve seen.

Similarly, reflexive damage your biscione scales can cause to those that attack you to suffer are cool, but as the second feat, arguably better that gaining at-will detect chaos with the added caveat of being able to deduce if a target has willingly broken a law. As a minor nitpick, the scales in question do not specify their damage type. On the plus-side, e.g. gained natural attacks do come with properly codified type and size-based damage-dice, so that’s a precision plus. On a nitpicky side, there also is e.g. a reference to element that should read “energy” and the like. Don’t get me wrong, I don’t consider these feats bad per se – but in some of them, the comparative power-level fluctuates between mini-trees and these small hiccups do accumulate. On the plus-side, e.g. the Improved Unarmed Strike-Fighter-enhancing Lepus feats that let you trip kick foes and handle oversized weaponry with Weapon Specialization are pretty cool. There are also some instances that made me wonder: Manticore, for example. Sure, there are plenty of mythological references to poison – but in our game, the critter is NOT poisonous, which made the poison-emphasis of the feats puzzling and illogical from an in-game perspective. It’s like having a dolphin as a heraldic animal and gaining climb powers. Maybe I’m overthinking things.

The pdf concludes with the heraldic knight alternate class, basically a variant of the cavalier, who retains d10, good Fort-save and BAB-progression, proficiency etc., mount…you get the deal. Instead of an order, the heraldic knight chooses a coat of arms at first level – said coat of arms is associated with a virtue, nets a class skill and a bonus feat and also determines the selection of vigilante talents he can take. Wait, what? Yep, these guys are basically talented, gaining heraldic talents at 2nd level and every other level thereafter: These generally are social talents, with the exception of those mentioned before. Hidden strike talents instead affect melee, which is pretty strong, and the heraldic knight is always using his social identity. They retain challenge, banner, better charging and higher levels also net bonuses to the skill associated with the crest and, as a capstone, they get a kind of superior Leadership…and seriously are an example of a simple, yet effective hybrid class design: The class basically takes the cavalier, inserts copious amounts of player agenda and still retains a focus on the concept of the knight: The vigilante-options utilized mean that this guy will be better in social circumstances than e.g. the cavalier, which fits well with the whole knight-theme. Surprisingly elegant, efficient design!

Editing and formatting are very good on a formal level; on a rules-language level, it osciallates a bit and ranges from top-notch t pretty good. Layout adheres to Flaming Crab Games’ 2-column full-color standard and the pdf comes with nice b/w and full-color artwork. The pdf comes fully bookmarked for your convenience.

Anthony Toretti, Neal Litherland, Jeff Lee and Michael McCarthy deliver an interesting Letter-installment here: The pdf begins with an all killer array of cool critters that feel creative and fresh and ends with one of the better hybrid classes I’ve read so far. The middle-section, the feat-array, though, feels less refined to me: Both the respective leitmotifs and the balance of the respective feats felt like it was oscillating a bit too much for my personal tastes. That does not make this pdf bad, mind you, but, as a whole, it feels less unified in voice and quality than usual for the series. As a whole, this is worth getting for the low and fair price point, but it didn’t rock my world as hard as some other installments of the series. While I don’t see myself using the feats herein, I do believe that both heraldic knight and the creative critters have a place in my games. As such, my final verdict will clock in at 4 stars – a good offering.

You can get this inexpensive, nice supplement here on OBS!