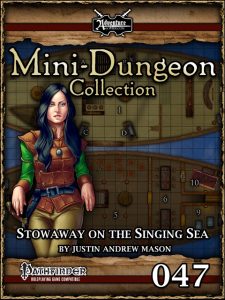 And now for something completely, radically different! This adventure takes place mostly with the PCs cooped up in a crate, with rations, portable hole for…ahem…necessities. Two weeks. Even if you fast forward that, it’ll be interesting if you just briefly mention each day and wait for your PCs to interact a bit. I’m serious. If you have good roleplayers in your group, this’ll be pure gold. That being said, there is a reason for this unorthodox way of travelling. You see, the PCs have been hired by law enforcement to catch captain Elloise Drake in the act, with the means of granting her crew amnesty. Thus, they stowed away on her vessel…and once the crate’s opened, the PCs explore the pirate vessel, catch it in the act of piracy and may use their social skills to make more of the crew turn against their captain. And yes, furious fight included. Sure, you can play this as a fast-forward one-big-encounter type of scenario…but if ran as provided, it can actually provide easily a full gaming day’s worth of fond memories.

Justin Andrew Mason’s “Stowaway on the Singing Sea” is a classic module that depends on whether it is perceived as a blast or as bland on both the GM’s prowess and the player’s temperament. Roleplayers willing to depict the journey will absolutely adore this gem and indeed, as a kind of break, as a means of taking tempo out of a campaign that seemingly runs from time-limit to time-limit, this works phenomenally well. You know your players better than I do – can they cope with such a set-up? if so, they’ll love it; if not, you can fast-forward through the two weeks of set-up, but you’ll lose out on the impact of the finale when it hits. This is, more so than most modules, a matter of taste.

In fact, if it has one neutral weakness, that would be that exploration of the pirate vessel does not really yield advantage when turning the crew – some one-sentence angles for key-crew-members to turn them would have been the icing on the cake. Still, this represents a great example of how cool a module you can craft even with a minimum of space. 5 stars.

You can get this cool mini-dungeon here!

While my review’s based on the PFRPG-version, you can find the 5e-iteration here!