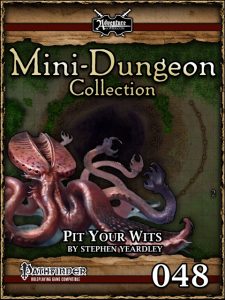 The PCs arrive at a well-known mining operation’s base…the issue, though, would be that it’s gone. In its stead, there lies a chasm filled with inky blackness, the result of an elder thing’s “planer[sic!]” ship crash-landing there – the fall of the ship has resulted in truly strange creatures – like giant crickets covered in glowing toadstools. Highly volatile fuel left on planks may ignite at a touch, moss has transformed in mindslaver moss; a goblin was turned into a monstrosity of warped legs with tentacle-like bits; intestines have congealed into a slug-like thing and what was once a half-dragon troll living nearby is now something completely different – investigating the strange crash-site will certainly yield some seriously interesting, horrific foes…and can be seen as a masterclass example in practice on how to properly reskin monsters to make them feel fresh and new. And yes, random encounters included.

Stephen Yeardley proves that he can do the horrific just as well as the creatively weird here – the mini-dungeon shows with perfect ease how you can reskin monsters and make them truly unique encounters, how you can logically and cohesively establish a thematic leitmotif in a mini-dungeon and run with it. This is a fun excursion, particularly so for fans of science-fantasy, dark fantasy or horror – with only minimal emphasis changes, you can easily ramp up the respective components. While this mini-dungeon is thus not necessarily brilliant, it most certainly represents a more than fun low-level excursion for such games. My final verdict will hence clock in at a well-deserved 4 stars.

While my review’s based on the PFRPG-version, there is also a 5e-iteration here!
Endzeitgeist out.