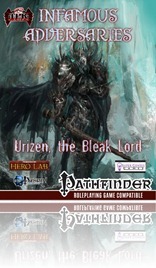 TPK Games are back with their latest installment of the Infamous Adversary-line, this time featuring a cool collaboration with fellow 3pp Super Genius Games. The pdf is a whopping 36 pages long, 1 page front cover, 1 page editorial/ToC, 4 pages of advertisement and 1 page SRD, leaving us with 29 pages of content -still quite a bunch for a pdf centered on one particular villain.

From rather humble beginnings, the Infamous Adversary-line has improved so far to include some of the most iconic villains sold in PFRPG and this time, they take SGG’s antipaladin variant-class Death knight to infuse unlife into it. As with all recent Infamous Adversary-pdfs, we get an extensive and expertly-written short fiction that draws the reader into the narrative, information on the villain’s allies, resources, tactics, lair, quotes and motivations. After an introduction by Super Genius Games’ Owen K.C. Stephens, we thus delve into the background of Urizen.

And it is here that I pronounce the inevitable SPOILER WARNING. I’m going into details that will spoil your experience with Urizen, so potential players: Please skip to the conclusion!

Still here? All right! Once, Urizen was a mortal barbarian living in the frozen wastes under the reign of cruel Utgaroth, god of the frozen north winds. Then, he was not only mortal, but also known by a different name, that of Graldis the Cold. Obsessed with the cold and seeing his brethren as weak for requiring the warmth of the fire to stay alive, he took his magical bone beads and was banished to the cold. Just before succumbing to the dread terrain, he found a suit of demonic armor that whispered to him fell promises of power and sure enough, he donned it. When the half-giant exilant winter witch Valkiri found him, she realized that this man would become the fabled dark messiah she had hoped for – guiding him towards the frost giants, Graldis managed to gain dominance over them – at the price of his death and, subsequently as per his pact, his immortal soul: Graldis rose again from the pyre, reborn in cold undeath as the Graveknight Urizen the Bleak Lord, the fragments of his erstwhile humanity being slowly shed like frostbitten toes and fingers.

The ensuing subjugation of tribes and giants now see Urizen on the brink of being able to wage a war from the north to extinguish the fire of the living, not unlike the threat of the Walkers behind the Wall in “A Song of Fire and Ice”. Apart from his stats when he still was mortal (CR 6 armored hulk barbarian), we also get a CR 14-version with 8 Death Knight levels and the fearsome CR 19-incarnation of the true master of the north, sporting 13 death knight levels in addition to his armored hulk powers. Beyond that, we also get two possible mounts fully statted with an ancient skeletal wyvern and a skeletal mammoth that should serve as appropriate steeds for the Death Knight. Finally Valkiri also gets two incarnations, one at CR 10 and one at CR 15.

Editing and formatting, unfortunately, as much as I’m loathe to say it, can only be considered sloppy. Double blank spaces? Check. Inconsistency in names (Valkiri/Valkari as an example)? Check. “Nearby” in Arcane Familiar Nearby not bold? Check. Then we have punctuation errors, etc. making me REALLY wish this had gotten another pass at editing – it needs one,a s the glitches detracted ratehr heavily from my immersion in what otherwise would be a compelling background story. The artwork of Urizen is top-notch indeed and beyond reproach. The pdf comes with extensive bookmarks and an additional, printer-friendly version sans artworks. As with all releases by TPK Games, much of the pdf is hyperlinked to d20pfsrd if you’re using the pdf on your tablet/PC. Layout adheres to TPK Games’ 2-column standard as well as a sufficiently frost-bitten looking font for the headers. The character comes with full herolab files.

This is one of the pdf that make me be annoyed at being a reviewer – there’s a lot to be enjoyed in the pages here and Urizen is indeed a cool (pardon the pun) villain that will lead to memorable showdowns, cool encounters etc. While personally, I prefer Ischadra and Raxath’Viz, he is still on par with the line’s high standard. Getting 3 different statblocks is also nice and ensures continued usability of the adversary. What is less awesome, though, is the rather unpleasant amount of editing glitches that has crept into these pages. I try not to be too anal-retentive when it comes to them, but this pdf is beyond what I’d consider neglectable, especially since they detract from the appeal of the otherwise great fluff and also found their way into the statblocks, which is a big no-go. As an additional gripe, I have to mention that the witch-consort featured herein lacks stats for her familiar – though these critters are rather crucial for witches. The rules of the Death Knight have been implemented well and the characters, fluff etc. are also executed rather nicely. But the glitches, combined with the lack of a familiar unfortunately make it impossible for me to rate this higher than 3 stars. If you don’t care about them, go ahead, check it out. If you’re really stingy about this kind of stuff, wait for the (hopefully upcoming) revision this pdf deserves.

Infamous Adversaries: Urizen the Bleak Lord is available from: