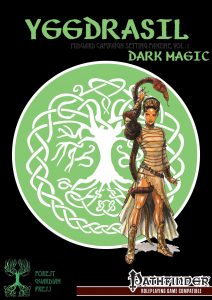 This fanzine for Kobold Press‘ Midgard setting clocks in at 95 pages, 1 page front cover, 1 page editorial, 9 pages of advertisements (many of which are half-pages), 1 page SRD, leaving us with 83 pages of content, so let’s take a look!

It should be noted that I usually don’t review free e-zines, but this was requested as a non-prioritized review by my patreons and, well, I listen to them. This book being FREE itself constitutes a definite plus for this book, so if something I tell you about strikes your fancy, please do check this out.

After a brief introduction by both Wolfgang Baur and Morgan Boehringer, we begin with Curtis Taylor’s Nivayan Codex, an intelligent and rather malign spellbook that can be quite an interesting mastermind. Complete with preparation ritual and boon as well as two spells, corrupting dreams and shadow shackle– particularly the latter is interesting, making your shadow “heavy”, with precise effects depending on the light-source – I really like this spell! All in all, a solid start for the fanzine.

Next up would be veteran Mike Welham’s article “Deeper Darkness”, wherein we can find variant darkness-spells: Beyond coalescing darkness into a claw, we can also find darkness that clings to targets and a hard crowd-control spell that renders targets staggered…and there is one at 6th level that represents a shrieking darkness that causes sonic damage and potentially stuns targets – cool: This requires pre-existing darkness-areas. As a minor complaint: A spell-reference to deeper darkness hasn’t been italicized and one spell is missing a “the” somewhere. That being said, cool magic!

We remain on topic with Caroline Trotter’s raven magic: Her spell feel astoundingly like MAGCI: Casting iron fillings to create a raven messenger that explodes if intercepted…yeah, that feels like it could happen in one of the classic tales. Pity we only get one spell from her pen! Caroline, if you’re reading this: Write more!

Veteran Brian Wiborg Mønster takes us to meet the dread Puppetmother of the Old Margreve, providing a legend complete with compelling adventure hooks and two puppet-related spells – creepy in all the right ways!

We get a full-blown adventure penned by James Thomas next, the “Voyage of the Naughty Lass” – and this being an adventure, we have a couple of SPOILERS here – potential players should jump ahead.

All righty, only GMs around? Great! The Naughty Lass is basically a steam-boat, powered by a fire elemental – one with a kobold crew! While the PCs are travelling by ship, they meet the crew of the Naughty Lass and help them fend off a giant squid attack. You see, the vessel is actually a submarine and the captain invites the PCs on a cool underwater exploration. One hull-breach from aforementioned squid attack later maroons the PCs at the bottom of the sea, where they will have to brave giant anglers and sea anemones to repair the vessel The captain is looking for the legendary dodecahedron artifact, which lies ostensibly in a nearby sunken city that the PCs get to explore. The sunken temple provides cool ankeshelian treasure and is lavishly-mapped in a phenomenal full-color map – while no player-friendly version is included, the map is absolutely stunning. All in all, a nice, well-made sidetrek, though I do wish it made more use of the 3-dimensional combat possibilities of underwater adventuring.

From the pen of Marc Radle, we are introduced to Va’zesh, the swaying death, a lamia commoner/serpent blade and his consort. The article also contains two feats – a bland Intimidate enhancer and a feat to speak with snakes – that lacks the italicization of the spell referenced.

While Richard Green’s amazing city of Parsantium is not officially located in Midgard, it makes for a surprisingly organic fit in my opinion – and even when not using the city, the fluff-only write-up of members of the Fireball Club (think: Fantastic Hellfire Club) make for nice reading experiences.

Henry Wong provides the Hellfire Militant, a battle scion archetype that comes with cool, extensive background notes. The archetype adds spells with the hellfire descriptor from the paladin or antipaladin list to his list of spells known. Hellfire, as depicted here, is btw. composed of half acid, half fire damage, which keeps the hellfire blast properly in check. The dweomer-tempered weapons are replaced with a custom list and at 2nd level, the character learns to make special items from hellfire -defensive mantles, shielding gauntlets, touch attack enhancers – I really like these. However, at the same time, there are a couple of issues in the rules-language: There is e.g. an instances where a retributive strike can be enhanced by expending a swift action – that should be immediate. Or is the action taken and damage caused on the next round? No idea. A chain lacks damage types in its base language…you get it. An inspiring, flavorful archetype with some rough edges.

Mike Welham also nets us the CR 7 Blight Drake, CR 8 Festering Drake and CR 11 Iron Drake and the CR 10 Pale Drake – these monsters have in common that they have cool signature abilities and flavorful descriptions – big plus for them!

Sarah Counts provides the mousefolk called Natoosi, Midgardian variant ratfolk – solid. Her twisted pair, illustrated by James Austin, is something that made me grin – with a unique vulnerability, its dirges and the ability to exude swarms, this is an amazing critter that made me smile from ear to ear!

Caroline Trotter proves that she can write in a nice, compelling legend on the possible origin of blood roses – a compelling, flavorful read that you can easily use for your own myth-weaving.

Mark Hoover’s sidetrek Grave Duty is up next – and it has not only has an amazing map by Alex Moore, it also has an interesting premise: The PCs stand vigil over the corpse of a deceased priest, but things are seldom as they seem and while there are undead, the true culprits and dangers here are interesting indeed – two items, a unique hazard and a rather…ahem…precarious situation assuredly make for an amazing way to kick off a new campaign. Well worth running!

Wojciech Gruchala is up next and provides a Bear Totem Warrior that focuses on bear shapes. A feat for undead barbarians and non-rage totem-powers are interesting. Weird totems, from aberrant ones to ghoulish and shadow stranger, make for intriguing options – particularly the healing-hampering ghoulish totem can be rather deadly. The aforementioned archetype is btw. pretty extensive and offers quite a few interesting options for players – including swarm totems! At ¾ BAB-progression, ½ Fort-and Will-save progression as well as 7/10spellcasting progression, d10 HD and 4 + Int skills, the berzerkir provides a PrC for healing ragers with a bit of a shamanistic bent. All in all interesting, if odd regarding the choice of name.

Jonathan Trotter provides the first of Midgard Legends – Havoc’s Tavern comes with the full CR 12 stats of Temerith the Shadow. Yngvid, the scaled witch by Jarrod Camire makes for a solid low-level character as well. Really cool: Curse of the Witchkeep from the phenomenal Midgard Tales book is vastly expanded: All 69 inhabitants are depicted by Morgan Boehringer, making Loshtadt a proper and cool backdrop – massive kudos here, and yes, this includes a map. One of my favorite articles herein.

Andrew Christian provides magic of the ice – with a new bloodline, a wild-blooded variant and an oracle mystery. These are generally nice, though I did notice a missed italicization, an instance of untyped damage that should be piercing damage – you get the idea. Not bad, bt not that impressive either.

Brian Suskind provides another expansion for the fantastic Midgard Tales-book – a fully depicted mercenary company, including stats for the leader – big plus and cool expansion here!!

Next, we’ll take a trip to the Keramos Isles –where strange plants can be used for poisons and as substitutes for mundane items, and where the volcanic, verdant jungles house the secrets of alchemical ceramics (new material) and a new trait and feat – the latter lets you stick alchemical substances between layers of ceramic plate, for example – really cool and evocative article by Chad Middleton and definitely a high note to end the pdf on.

Editing and formatting are good; while I noticed a couple of glitches on a formal and rules-language-level, the pdf as a whole is well-made. Layout adheres to a nice 2-column b/w-standard with a blending of stock and original art that creates a unique atmosphere. The pdf comes fully bookmarked for your convenience and cartography is mostly amazing, though I wished we got key-less player-friendly versions of the glorious maps.

Morgan Boehringer, Jarrod Camiré, Andrew Christian, Sarah Counts, Richard Green, Wojciech Gruchala, Mark Hoover, Chad Middleton, Brian Wiborg Mønster, Marc radle, Brian Suskind, Curtis Taylor, Caroline Trotter, James Thomas, Margherita Tramontano, Caroline Trotter, Mike Welham and Henry Wong have created a great fanzine here – the artists James Austin, russ Bellon, Morgan Boehringer, Pete Fairfax, Alex Moore, Jayaraj Paul, Marc Radle, Frank Turfler Jr. and Caroline Trotter also deserve praise here – Yggdrasil feels, as a whole, like an organic extension of the amazing Midgard campaign setting: Slightly darker than Golarion, slightly more medieval and more in tune with Sword & Sorcery and classic fairy tale tropes, this e-zine is most definitely worth getting: While I wished James Thomas module was longer, I had fun with it: As a tip: Add Alluria Publishing’s Cerulean Seas-rules for extra fun! Similarly, the Midgard Tales-expansions were amazing and enhance their modules. Grave Duty makes for a great kickstart of a campaign; the monsters and NPCs are compelling and even the spells, of which I have seen a metric ton, do come with some really nice visuals. Now this is not perfect – it does have a couple of rough patches in the rules here and there…but frankly, this is FREE. And it oozes passion in all the right ways. This is well worth getting right now if you even remotely enjoy Kobold Press’ amazing setting. As a FREE passion-project, this is amazing and worth 5 stars + seal of approval.

You can get this cool, FREE fanzine here on paizo.com!