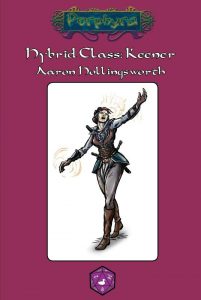 This hybrid class clocks in at 13 pages, 1 page front cover, 2 pages of SRD, leaving us with 10 pages of content. It should be noted, though, that the pages are formatted for A5 (6’’ by 9’’ digest) size – you can fit up to 4 pages on a sheet of paper if your sight’s good enough.

So, the keener would a hybrid class of bard and cleric, with d8 HD, 4 + Int skills per level, ¾ BAB-progression, good Fort- and Will-saves, proficiency with simple weapons and light armors and shields, excluding tower shields. They gain spontaneous Charisma-based spellcasting, drawing their spells from both the bard and cleric lists. Bard spells are converted to divine spells and the keener does not need to provide a divine focus. They gain spells of up to 6th spell level. As an aside: The table lacks the value denoting the amount of 6th levels at 20th level – extrapolating from the table, the entry should probably be “4.”

Okay, we begin with a very potent ability – eulogist allows a keener’s spells and lament abilities to affect undead creatures with mind-affecting abilities and conditions that undead are usually immune to. Yes, you read right. ALL of them. And this exact moment is when this class got banned at my table. That’s a capstone, not a 1st-level ability. Undead, usually immune, lack the defenses that comparable creatures get. Why not spread the conditions (which should be listed) over the levels of the class? Would be better balanced and rewarding. Also: Does this extend to Fort-based effects that don’t usually affect undead? This…is a mess. Additionally, the ability nets 1/day sanctify corpse as a SP, which, at 10th level, may be made permanent for 500 gp.

The signature ability of the keener would btw. be keening – gained at 1st level, the ability can be activated as a standard action. Good keeners get positive energy, evil ones get negative energy and neutral ones can choose. Keening has a range of 25 ft + 2 ft. per 2 class levels and bursts then in a 30 ft.-spread, striking a number of additional targets in that spread equal to the keener’s class level – kudos for the Dev-comment here – the regular ability is a bit confusing in its wording. The damage-scaling of keening contradicts itself 1d6 “plus 1d4 for every 2 keener levels beyond first (1d6 at 3rd…” – so, are the additional dice d4s or d6s? The save works analogue to a Cha-governed channel and the ability can be used 3 + Cha-mod times per day, +1 for every keener level attained after 1st. Targets must be able to hear the keener to be affected. So yes, keening is SIGNIFICANTLY better than channel energy. It has more control built in from the get-go and allows you to hit targets beyond line of sight! Once again, a per se cool idea, but balance-wise something I’d consider problematic.

5th level nets the ability to cast Verbal-only spells (erroneously referred to as “Vocal”) sans provoking AoOs. OUCH. It gets worse: Spend, as a free action, a keening use to cast ANY spell sans provoking AoOs. 8th level nets the Su-ability to ask a corpse a question (as speak with dead, but does not count as cast spell), with a ridiculous save of 10 + keener level. 10th level nets immunity to fear and 2/day overwhelming grief, +1/day at 17th level. 15th level nets one of the following SPs: Hymn of Mercy, Imprisonment, Soul Bind, Wail of the Banshee, usable 1/day. The capstone provides either undead or fey apotheosis. Lame.

Now, the keener also has a kind of talent array – so-called laments. The first of these is gained at second level and every even level thereafter yields another lament. Additional effects of laments used in conjunction with keening are negated on a successful save. Each lament may only be used once per day and affects a single keening. Laments may be chosen multiple times, granting an additional daily use. “All bonuses are either “profane or divine”…That should be “sacred”!

Now, there are a ton of laments: On the offensive section, we have added blindness, energy type conversion, sickening targets, fatiguing targets – you get the idea. Negative conditions last for class level rounds. The “good” laments on the other hand allow the keener to heal negative conditions. The wording for these, considering their simplicity, is surprisingly often a bit wonky.

The class comes with supplemental feats: +2 keenings, +1 lament, a feat for +4 to Intimidate checks (not Intimidation) against dragons, reptiles, snakes and similar critters (BOOORING) and Harmonic Lament, which lets you expend two uses of keening to apply two laments to a single keening. Okay, are these two keening uses in addition to the keening to be modified or is that cost instead of the 1 keening required for activation? No idea.

The favored class options are extensive in scope (covering a ton of the Porphyran races), but very inconsistent in their power, ranging from very powerful (spontaneous caster!) additional spells for some to nigh useless +1/2 daily use of sanctify corpse.

Editing and formatting, on a formal level, are very good. On a rules-language level, a couple of issues that influence the rules-integrity have crept into the class. Layout adheres to Purple Duck Games’ printer-friendly 1-column standard with purple highlights. The pdf has no artworks apart from the cover, but comes fully bookmarked for your convenience.

Aaron Hollingsworth’s keener could have been so much better – with a more dispersed unlocking of affecting undead, a more limited keening in the beginning (and instead, better laments/lament-scaling) and a generally tighter focus, this could have been an amazing hybrid. I like the idea and the flavor here. It should be noted that the dev-note explaining keening helps a lot –the wording of the ability is a bit confused. Speaking of which – the scaling and extent of keening remains opaque. This is an inexpensive pdf, sure, but the class presented is a flawed offering. You can make it work, but it will take a bit of fiddling – and honestly, what’s here, is very bursty. My final verdict, ultimately, can’t exceed 2.5 stars – and I can’t round up for this one.

While the keener isn’t great, the author has penned two fantastic hybrids:

The Luminary can be found here!

The Vessel can be found here!

You can support Purple Duck Games here on patreon!