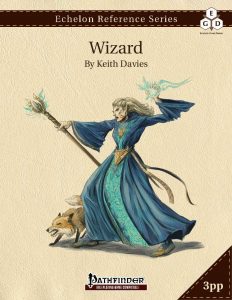 This massive reference-book clocks in at 264 pages, 1 page front cover, 1 page editorial, 2 pages ToC, 11 pages of SRD, 1 page back cover, leaving us with 248 pages of content, so let’s take a look!

This pdf was moved up in my reviewing queue as a prioritized review at the request of my patreons.

So, what is this book? Well, first of all, in case you’re wondering, this file exists in two versions – one organizes and collates only PRD material, while the other includes a smattering of worthwhile 3pp-material. I am, unsurprisingly, mostly concerned with the latter, though PRD-only groups should appreciate the existence of that version. This reference file collects a metric ton of wizard material. That being said, as per the writing of this review, we’re looking at the RAF (Rough and fast…somewhat unfortunate acronym)-version; this version is discounted at 50%; it will be upgraded to the WIP-version (which will then sport a 25% discount) and then proceed to the final version, which will then be sold at full price – seems like a fair way to support early adopters.

In this review, I do assume, at least to a degree, a familiarity with the Echelon Reference Series; I am going to mention specific, convenient components and whether or not they are already present in this first iteration of the file. We begin, as always, with a breakdown of the class, though the handy short-hand bubble that lists the crunchy bits of the class at a glance is not yet included in the pdf; this means that class presentation, apart from the layout peculiarities, is pretty much as you’d expect; i.e. we have the little bubbles denoting ability type and prerequisite levels already included, so core functionality as a reference is definitely provided.

From there, we move on to the respective archetypes – while the archetypes themselves are provided in fully functional state, their individual files are not listed this time around, so, at least for now, it’s not that easy to find out which file contained that kenjin lorekeeper archetype you enjoyed. The selection is pretty nice, including exotic engine-tweaks like the zauberer, to note one of the more complex archetypes. It should also be noted that the convenient, pre-combined archetype + class presentations, the archetype classes, are not yet included in the pdf.

As this book is focused on the wizard, we also take a look at arcane schools; beyond the school specialists, the alphabetical list also features the elemental specialists (including e.g. crystal or earth specialists). Analogue to e.g. the sorceror’s wildblooded bloodlines or subdomains, we also get a list of focused arcane schools – these already note their respective associated parent school, though they are not internally hyperlinked to the respective parent; oh well, the EXCESSIVE bookmarks make navigation very quick and easy, so no harm done there, convenience-wise. Speaking of arcane school: Beyond aforementioned specialists, the elemental arcane schools get their own distinct chapter, including metal and wood.

From there, we move on to the arcane discovery section; here is a great way for me to comment on the way in which this version helps you navigate it without being annoying: You see, the book color-codes rules-relevant terms: When you e.g. read ioun stone, it will probably be green; same goes for spell-references. This denotes that they point towards rules-relevant material not included in the pdf; on the other hand, internally hyperlinked components are presented in a blue color, allowing you to jump to them with one click.

Another highly helpful component would become evident in the feat-chapter: beyond item creation, a serious focus here would be metamagic – and metamagic feats note their spell slot adjustment in the bubble that contains the prerequisite(s). One look at Arcane-Born Sorcery and you’ll see that the spell slot adjustment is 1 level. Seriously, that’s surprisingly convenient and frankly is the preferred standard for me; I wished metamagic feats used this form of presentation. An inconsistency that hearkens from the original files presenting the feats would be that some of them lack the descriptive line, but that is not something I’ll hold against this pdf. It should be noted that there are still a couple of rough edges, where blank spaces seem to have gone missing; here and there, you’ll e.g. read “hasspeak with animals” and similar cosmetic hiccups.

The pdf also sums up arcanist, sorcerer and, surprise, wizard spellcasting and presents a MASSIVE list of wizard spells by spell level.

Surprisingly, the helpful NPC-codex section at the back of the book is already included, running the gamut from CR ½ to CR 19; as before, the sources are not explicitly noted, but the section draws on the usual suspects, but also features e.g. a worm that walks, (core) PrC’d characters…you get the idea.

Now, thankfully, this pdf already features the immensely helpful, massive index – which, this time around, clocks in at an impressive 14 pages. You’ve probably wondered where the cool flow-charts are – well, this version does not yet sport the cool diagrams and flow-charts and thus, also does not feature a diagram index to read.

Editing and formatting, while not 100% applicable, are well done, particularly for a rough first version; if an option had some rules-snafus in the original version, you’ll generally find them here as well, but that’s not something to hold against this book – it’s a reference file, after all. Layout, while not necessarily beautiful, does have its appeal: It is functional and grows on you while using the file. The excessive bookmarks and hyperlinks are great and add some serious value to the file, though, this being as of yet unfinished, it should come as no surprise for you that it is not yet as in-depth in the implementation of the ERS series’ comfort-enhancing functions.

Keith J. Davies’ “Echelon Reference Series” is one that is easy to judge at first glance and, frankly, most people would probably loathe having to review what amounts to a handy, collated catalogue; after all, you can’t well complain about the content depicted. I am pretty OCD, though…so I end up reading these in detail. That being said, believe it or not, I have come to enjoy tackling these massive monsters. Reading through them has an almost meditative quality for me; there is beauty in these massive accumulations of data and how they are organized; this version is not yet as polished and streamlined as the final version, obviously…which makes rating this pretty difficult for me.

I can’t well hold it to the same standard as the final version, but at the same time, it is arguably less convenient and useful than the final release will be. So, let’s speak a bit about it: This is NOT crippleware, the book already sports the trademark core functionality of the series and the usefulness of the concept and organization is already here. At the same time, this version still lack the refinement, the small flourishes that make the final reference files more than the sum of the content they present. In short, this feels more like a compilation than the finished products do; it doesn’t yet have this sophisticated smoothness conveyed by the totality of the features the series usually adds. As such, this represents a good offering to get now, particularly since the file will be upgraded to the level of gorgeous functionality we usually expect from these. As such, my final verdict will clock in at 4 stars for this rough and fast first version.

You can get this handy reference file here on OBS!

Want the PRD-only-version? You can find that one here!