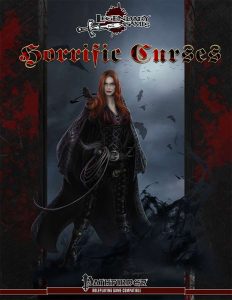 We begin this supplement with new archetypes, the first of which would be the accursed witch. These witches are locked into death, insanity, moon, plague, spirits or vengeance as patrons. Starting at 1st level, they gain an oracle’s curse, based on level and, nice, the archetype comes with multiclassing options regarding the curse, Starting off at 4th level, the accursed witch may basically, hex-like, inflict her curse on targets – the recipient does not gain the benefits unlocked later and, since this slightly exceeds a regular hex in potency, we have an Int-governed daily limit as well as the hex-save-caveat. Instead of 8th level’s hex, the witch may choose increased durations of curse spells, higher CLs, higher ranges (listing the progression of ranges and specific, non-scaling ranges – big kudos!). All in all flavorful.

Next up would be the hex hunter, who replaces Heal with Knowledge (arcana) as a class skill and loses proficiency with wither medium armors or shields. These guys cast Int-based arcane spells taken from witch and ranger spell lists and replaces animal companion with a witch’s familiar. Animal Focus is delayed until 8th level, with the second unlocked at 16th level. Nature training is replaced with the ability to apply, as a swift action, the effects of evil eye in melee, usable 3 + Int-mod times per day. Instead of hunter tactics, we gain the beast of ill omen hex, with the teamwork feat being replaced by attacks of the cursed strike mentioned before being extended as per cackle on a critical hit. This becomes more relevant at 6th level and every 3 levels thereafter, as new hexes to be added to the strikes are unlocked, replacing the respective teamwork feats. At 7th level and every 6 levels thereafter, we add new curse-spells to the spell list, replacing bonus tricks and. 10th level provides the option to gain a hex from a list of 4, which may be determined anew each day, replacing animal companions.

After this nice archetype, we are introduced to the jinx sorceror bloodline, with Perception as a class skills and a fitting array of spells as bonus spells. Similarly, the bonus feat selection is nice. The bloodline arcana increases the DC of compulsions, curses and pain spells, with the DC to dispel or remove such effects increased by 2. Bloodline powers-wise, we begin with an orcale curse, with 3rd level yielding an aura of despair. 9th level yields the misfortune hex and 15th level allows you to place glyphs of warding with select triggering conditions to targets. 20th level yields immortality – you no longer age, are immune to death effects, etc.

From here, we move on to the new spells, which make use of the dying spell concept, allowing casters to take a final potshot – while they can be cast in less dire consequences, such cases are rare, considering the extremely high concentration required. As such, these spells will usually be cast upon being incapacitated or slain and a special, but costly ceremony, can render them viable even in scenarios, where action economy is an issue, guaranteeing that you’ll get your deadly vengeance. Spell-wise, we can find, e.g. Avenge Me!, compelling creatures to seek vengeance for you. Call the Avenger similarly combines sending and demand to destroy your killer and sending off dying words to allies similarly makes sense, representing properly a fixture in fantasy literature. Providing a dying scrying for a final witness or entombing yourself in ice also make for intriguing, flavorful options….and yes, there is a funeral pyre…

Now, this book is called has “curses” in its title for a reason and we receive a diverse assortment of different curses – the base-rules here follow the first curse-based supplement released by Legendary Games and the representations of the respective curses contain cannibalism compulsions, shrouding a target in palpable, demoralizing gloom or shrinking the target continuously, until it has become basically nonexistent (see Atom or Ant-Man for more on that concept…and there is a variant, which ties shrinking to magic use…). Rendering the flesh of a target unstable or instilling an unquenchable gnawing hunger are interesting tricks…but there are some curses you may want to seek out: Fatal Strength, for example, can yield benefits to the PC, but also burns away the years they have. Instilling a horrid hatred in foes, suppressing any form of empathy or cursing a target with insomnia.

Have I mentioned the option to create a kinslayer curse, a curse whose effects are determined by the phase of the moon or the curse that makes your eyes turn black and makes you susceptible to bright eyes? More complex and potent yet would be the 6 different mythic curses included, including knitting the victim’s mouth’s flesh together, making targets feel the pain inflicted on others, transforming digits into thumbs, regressive aging or having prepared or known spells inscribed visibly o the skin make for fascinating curses…and the latter one also comes with a version that makes you bleed for casting the spells inscribed in your flesh. Come to think of it, these two curses alone could work as a basic spellcasting tradition capable of carrying a whole campaign…I think I’ll have to design the like at one point…

Editing and formatting are very good, I noticed no glaring glitches. Layout adheres to a gorgeous two-column full-color standard and the pdf uses nice full-color and b/w-artworks, though fans of LG will recognize most from previous publications. The pdf comes fully bookmarked for your convenience.

Jason Nelson, Alex Riggs and Jen Page deliver a cool, fun collection of curse-themed options in this pdf. Particularly the spell-inscription curses are gold and I’d be seriously surprised if there was no campaign by a fan of dark fantasy or horror out there that employs these for a custom magic system/tweak – as mentioned, these may very well be worth the asking price for you on their own. The dying spells and archetypes are fun, with the hunter in particular being interesting. The curses are also rather nice, though, as a whole, they felt a bit less horrific than I expected from the pdf, with many focusing on concepts that strike me as more fantastic than horrific, but that may just be me.