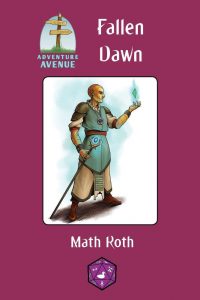 Fallen Dawn is a location-based exploration adventure for 5th level characters, taking place in the Lotus Blossom Steppes of Porphyra, to be more precise, on the Lung Plateau. These steppes (fully mapped in full color, just fyi!) are the home of many struggling clan of powerful nomads, awaiting a Khan to unite them into a coherent force, but that won’t happen, at least for now, for the dread half-rakshasa Khan Tiikeri is keeping things pretty deliberately as they are. However, sealed away after the NewGod wars, there are tools to be found within the steppes – tools that may change all of that…

…and this is about as far as I can go without diving deep into SPOILER-territory. Potentialy players should jump to the conclusion.

All right, only GMs left? Great! So, the adventure features several different hooks that can be used to point the PCs towards the adventure locale, as the default origin would be the sleepy village called “The Nest”, which has recently seen some business…impeded…by a traveling scholar of Paletius, deity of knowledge, looking for a lost and sacred site on the plateau. Well, turns out that this scholar is actually an agent of the eventual Katek, seeking to dissuade potentially dangerous individuals by tales of boring details…though, PCs being PCs, that will obviously backfire quite spectacularly.

Further observation via clockwork spies and said being may tip off the PCs regarding strange machinations afoot – and on the halfway point between the nest and the tower of the setting sun, a bhorloth, a gigantic, green-furred bison-like thing and its mounted archer master may try to dissuade the PCs further. Personally, I would have liked the journey to be slightly more detailed, but oh well.

What the pdf lacks in details regarding the journey, it makes up for in the approaches to the tower, for no less than three angles (East, West and North) are covered in the pdf, all with their own read-aloud text – kudos! The forlorn tower’s broken top, leaning against the plateau’s stone for a support lost ages ago, certainly makes for an evocative visual impression.

The exploration of this tower, once a sanctuary and repository of forbidden knowledge, can make for a compelling narrative and provides the brunt of the module’s content – you see, the tower has by no means been thoroughly explored and Paletius being a benevolent deity, it can actually yield some interesting pieces of loot for the PCs. It also features two distinct, well-blended themes: On one hand, we have the sense of antiquity of the place, evoked rather well with prose etc. – on the other hand, we have the current, organized inhabitants of the tower, the expedition of the eventual Katek, who seeks to unearth the knowledge herein to challenge Khan Tiikeri. His intentions were once pure and arguably still are – but in his quest for truth, the eventual has begun a slide down the alignment scale – should he prevail with his less than scrupulous allies, he could become a truly fearsome iron-handed tyrant. This knowledge is not necessarily dumped on the PCs per se, but e.g. reactivated constructs and the choice of creatures (which include shiko-me, unique variant clockwork creatures, advanced shadow drakes and komori-ninjas in a cool selection of less common critters) and their notes can actually have the PCs unearth this knowledge – in short, a nice example of how indirect, less obtrusive storytelling can be used.

Now beyond those aspects, the exploration also manages to depict the leitmotifs of Paletius’ iconography well – and PCs may well find out that the knowledge locked in the so far undisturbed sanctum was deemed forbidden. In fact, they may actually succeed where Katek failed and open the sanctum – but only if the GM desires, for the puzzle/riddle-based mechanism to open the gates to this vault hinge, even if you know how to use them, on an aspect that is completely under the GM’s control – which is pretty nice. The artifact Katek is looking for is btw. depicted (and “just” a 35K ring), but it’s still nice to a) have such a well-wrought puzzle in the pdf and b) retain full GM-control over the treasure and how this aspect pans out.

Speaking of panning out: The pdf provides full stats for all foes faced (though e.g. the Students of Order lack their cleric level noted in an aesthetic glitch) and also includes notes on further adventuring possibilities – from redeeming Katek to uncovering the secrets of Paletius. It should also be mentioned that the book contains a nice break-down of XP and treasure by locale, which is really helpful, allows for easy XP and WBL-tweaking and should be industry standard, as far as I’m concerned.

Conclusion:
Editing and formatting are very good, I noticed no glaring glitches. Layout adheres to Purple Duck Games’ 1-column b/w-standard with purple highlights and the pdf features some nice pieces of full-color artwork of foes faced within. The pdf comes fully bookmarked for your convenience. The cartography is in color for the region, b/w for the adventure locale, and pretty nice indeed. The tower itself has sideviews for Western/Eastern approach, respectively, which is a nice touch. BIG PLUS: Purple Duck Games added a player-friendly map to the deal!!

Matt Roth’s “Fallen Dawn” is a well-crafted location-based module; it breathes a sense of the exotic and antiquity, making ample use of its unique backdrop – surprisingly while still maintaining the means to be dropped in most environments with relative ease – you just need a chaotic tyrant somewhere and that’s it. The most impressive aspects of the module, to me, did lie in the smart choices regarding adversaries faced and the sense of authenticity this managed to evoke. It’s a tenuous, hard task to evoke such a sense of cohesion, especially in a dungeon that features two different leitmotifs (abandoned/inhabited). Furthermore, the challenges and foes faced throughout the module allow a capable GM to tell the story of the antagonist in an unobtrusive manner, which is another plus. Finally, I’m a BIG fan of the puzzle to open the sealed chambers – it makes sense, perfectly mirrors the iconography of the deity, retains GM-control AND it feels MAGICAL in a sense of the word that’s usually only found in old-school modules. It also doesn’t make the antagonist look like an idiot for not having breached it, which is just the final nice thing to comment upon here.

Now, the module is not perfect – the lead-in feels a bit rudimentary and so does the journey – it is pretty evident that both only act as an extended preamble for the main meat of the module, when they could have used a bit more meat on their bones. The espionage angle in the beginning also could have yielded a bit more consequences regarding payoff, but I’m nitpicking here. That being said, once you reach tower, the adventure locale, the module becomes an excellent example of a nice, unpretentious, but thematically very concise dungeon: With fitting traps and foes, nice NPCs and well-executed indirect storytelling. Now, Purple Duck Games actually added a player-friendly map – which catapults this to the echelon of a true steal: You get a great module for a fair price! Well worth 5 stars!!