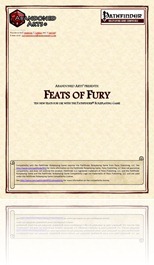 All right, you know the drill by now – Abandoned Arts, 3 pages, 1 front cover, 1 SRD, 1 content, this time giving us 10 Fury-themed feats, so let’s take a look!

Editing and formatting are very good, I only noticed minor glitches like "rage" in lowcaps. Layout adheres to Abandoned Art’s no-frills, two column standard and the pdf has no bookmarks, but needs none at this length. Neat! For the first time in Abandoned Art’s feat-line, I get a pdf where I have nothing significant to complain about and indeed, channelled rage alone as a feat is, at least imho, worth the low asking price. Do your barbarian a favour and pick this cheap pdf up – chances are you won’t regret it! My final verdict? 5 stars, falling only marginally sort of the seal of approval. Well done!

Feats of Fury is available from: