Thaw of the Lich Lord (Frostgrave)

Thaw of the Lich Lord (Frostgrave) 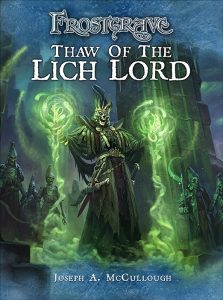 The first expansion-book to Frostgrave clocks in at 62 pages, minus 4 if you subtract editorial, ToC, etc., leaving us with 58 pages of content, so let’s take a look!

This supplement/expansion is the first big campaign for Frostgrave, and it is a cool one (pardon the pun) – but before we go to the linked scenarios, let’s take a look at the supplemental material, shall we? The first of these would be the bard – at 100 gc, he clocks in at the upper end of the soldier cost-spectrum, and at Fight +2, Armor 11, he looks like a pretty sucky choice; however, he has a phenomenal Will +4 and conveys a +1 bonus to Will to all soldiers within 6” of him, but only if they have line of sight. Nice: These benefits cannot be stacked. The Crow Master is just as expensive,, but has both Fight and Shoot +0, armor 11 and +2 Will…so why get him? Well, each crow master comes with a domesticated blood crow that has Move 9, flies, armor 14 and +3 Will…but only 1 Health. So yeah, deadly skirmisher-potential held in check by low Health…and by the restriction that your base needs to have one Blood Crow Roost per such soldier hired…and these restrictions better should be in place, for the blood crow does not count towards the soldier maximum.

Can’t afford an archer or crossbowman, but need ranged capability? The javelineer, for only 25 gc delivers that. These guys can use their weapons in melee and ranged combat, but only have a range of 10” and +0 Fight and SHoot – you get what you pay for, but a couple of these guys still can wreck your day. Finally, for 20 gold crowns, you can recruit a quasi-noncombatant with only a dagger and +0 in all relevant stats as well as armor 10. This would be the pack mule and his draw is that he may carry up to three items and hand them to other characters as an action. Wizards may use actions to take the item from the mule as well….or exchange it. All soldiers presented here have in common that they enrich the tactical options of the game in pretty interesting manners – Blood Crows can e.g. easily follow wizards abusing the Leap spell.

Speaking of spells – in that regard, the book offer three out-of-combat options: Witches may create homunculi; these miniature versions of the wizard decrease his health while in existence, but if he dies during survival checks, his homunculus grows to full size; this is basically an extra life. The other two spells pertaining the ascendency to lichdom; these guys are VERY powerful, but pay for that with increased experience point requirements to level…and, well, obviously, being undead. Thirdly, soldiers that died may be reanimated as revenants by necromancers…though that wrecks the reanimated corpse’s Will down to +0.

The book also features a new treasure table alongside 23 new magic itens…some of which become relevant in the aforementioned campaign…while others simply allow for something pretty cool: Crystal Roses that help survival, a book that allows for the recruitment of a rangifier (think savage, undead-hating elk-humanoids introduced in the book’s bestiary that are pretty badass: At M 7, F +2,A 12, W +3 and H 12 plus attacks count as magic versus undead and are made at +1.) or the eyes of amoto deserve special mention. The latter is a set of two amulets that allow the caster to cast 1/game through the line of sight of the wearer of the other amulet.

As already mentioned, the pdf does have a new bestiary, including random encounter table – the bestiary spans 10 creatures, two of which I have already mentioned; beyond death cultists (who have a REALLY good Will – +5!), the rest, surprise, would be undead of various powers…including zombie trolls or wraith knights. And yep, several are immaterial and may move through obstacles…which can be really painful. The most impressive creature here, obviously, would be the lich lord, though: His “AI”, i.e. his priority list, contains no less than 9 conditions, which makes facing him surprisingly difficult. That being said, the book does suggest to get a player/GM-like entity to play the part of the monsters in the finale of the campaign and I get why.

Now how does the campaign play out? Are the scenarios worthwhile? Well, it all begins as ominous as it gets – in scenario 1, there is a timer running down towards a total eclipse that is accompanied by a significant surge in magical power…but which also limits line of sight while in progress, allowing for some cool tactics and gameplay – this one’s mechanics can easily be scavenged and yes, there are bonus experience points for actually being on the table when the eclipse happens, so wizards have a reason to wait at least until it happens before vacating the premises. Scenario number 2 is slightly more complex in its set-up: It takes place on the Meregile, the frozen river; the first 6” from the tables edge are land—beyond that, you have the river’s unsure footing. From a barge on that river, a spellcasting servant of the lich lord sooner or later will emerge and taking the guy out before he can flee would be the primary goal here…though it’s easier said than done in the nasty terrain. Scenario 3 is simpler: The PCs basically attempt to loot a caravan of death cultists that had bad luck and a broken down wagon; while reinforcements arrive, they proved to be not too big of a hassle in my tests.

Scenario 4 ups the ante and is called “Storm of Undeath”; not only is a magically charged snowstorm reducing sight, the goal is also risky – in the middle of the table, there’ll be pylons with corpses. Each round, there is a chance for magic lightning to hit the pylons, with potentially lethal consequences…of, and the dead may be animated…but being in the area is also the way to gain the big experience points here. Just be careful to not die, or you’ll have a revenant on your hands. In #5, the evocative rangifers are in the center – and they are deadly…and it’s up to the wizards to prevent them being killed by a deadly wraith knight…problem is, that the rangifers are NOT nice guys…they prioritize destroying undead…but are not above splitting some wizard skull…

In Scenario #6, you best have a second table or cordoned area – the second are, ideally 1′ by 1′, represents a treasure room: Arcs and doors placed have a chance of teleporting those passing through to the second area, the fallen house’s treasure room…problem is, you can also be teleported out of the game or killed by the attempt…risky and interesting. Oh, and if you botch it, you may well end up facing death cultists all alone in the room… One of my favorites in the campaign, however, would be #7, the “lair of the ghoul king”: Situated in a vast underground chamber, the players are trapped in the ghoul king’s throne room. On his throne are levers that may allow for escape…but you have to get there first. The chamber is also dark and limits sight and makes for an amazing playing experience. Scenario 8 and 9 are somewhat similar – they focus on one unique aspect: In #8, you have the Black Cauldron in the middle, which continuously spawns zombies: Tipping it over is the goal here. In #9, the center of the scenario would be a bone wheel with sacrifices to be in the middle; freeing these guys and getting the treasure is hard, as the wheel is ever turning…oh, and there are the banshees.

After all of that, the lich lord has had enough: Exerting his magical might, he lets his castle fly above the city, held in place by taut chains; escape is not an option and lethal (unless you have the amulet to slow falls…) and the lich lord is a deadly foe…oh, and if you kill him, a generous countdown’s running down…be too slow and you die. Yes, DIE. This one has a very real chance of failure and is really epic in its feel. If the wizard persists, he does get bragging rights and cheaper recruitment from there on out, though.

Editing and formatting are top-notch, I noticed no significant glitches in either formal or rules-language criteria. Layout adheres to a beautiful one-column full-color standard and the pdf sports several evocative pieces of fluffy sideboxes. Artworks are the usual blend of amazing artworks and color-photographs of minis. I can’t comment on the electronic version, since I don’t have it, but the softcover is a nice little book with high-quality, glossy paper.

James A. McCullough’s “Thaw of the Lich Lord” is an evocative expansion – the new soldiers in particular are great paradigm-changers and the scenarios allow for cool tweaks that can easily be combined, changed, modified – but it is also here that the campaign varies a bit in its set-up: You see, there are a couple of scenarios that play like truly unique, interesting experiences…while a few feel a bit more like filler or don’t make maximum use of their modifications. The bone wheel is cool, but it’s engine tweak could have, for example been expanded upon. The book improves the base Frostgrave, though, and playing the campaign certainly is a rewarding experience. Hence, my final verdict will clock in at 5 stars.

You can get this cool (haha!) expansion here on OBS!

The print can be found here!
Endzeitgeist out.