MA5: Beyond the Ghostlight Reef 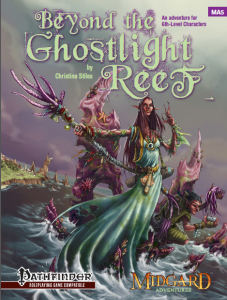 This module is 22 pages long, 1 page front cover,  2 pages editorial, 1 page SRD, leaving us with 18 pages of adventure, so let’s take a look, shall we?

We kick off this product with one massive box – since it was originally designed to be run at conventions, scaling advice for stronger tables is given in the beginning for stronger tables/groups before we delve into the meat of the module.

Still here? Set in the coastal city of Friula, the adventure has the PCs being hired by a member of the Bibliotori – hoarders and merchants of knowledge both mundane and magical – with what seems to be a binding oath (but in fact is just showmanship and hocuspocus). Their  contact, one man named Giolan seeks scrolls recently unearthed by the reef-tenders of the Ghostlight Reef – i.e. the servants of the Red Hags and blood druids that seek to eradicate arcane magic (or at least control it) to prevent a second cataclysm after the one that spawned Midgard’s Great Old One-infested wasted west-region. Now if you think they are benevolent – they aren’t. The red hags subsist on a diet of blood and harvest poisonous squid ink and addictive corals that are used as drugs in the weird coral reef. Unfortunately for the PCs, said hags have managed to get a hold of the scrolls in question.

In order to retrieve the scrolls, the PCs will have to traverse the dreaded “Dead Man’s Ring”, a reef which is the hunting ground of Friula’s most famous aquatic boogeyman – Dark Willy, the irreverently-named, yet at the same time dreaded and admired aboleth. And after navigating some rocky hazards, the PCs indeed have to stand their ground against the creature – hopefully after doing some research, for the preferred means of traversing his high ground would be with a non-violent resolution – which is by the way something I enjoyed seeing in here!

The next stop of their quest is the dreaded Red Hag’s isle, where not only the hostile flora and fauna, which includes smart worgs and grass cloakers (insert Spoony Grass-battle reference here) should provide a challenge, but where they’ll also stumble across a ziggurat – where they can invade the Red Hag’s alchemical laboratory and meet one particular Hag named Hislargat and her blood weird – who offers a counterproposal to fighting…

Here, it is up to the PCs to decide which of the two sides to choose, ending thus the module with different consequences, but not different final encounters.

Editing and formatting are top-notch, I didn’t notice any significant glitches. Layout adheres to a 2-column b/w-standard with the boxed text being framed by a purplish hue – all in all a nice module to look at. The pdf comes fully bookmarked and the cartography is awesome indeed – though we don’t get player-friendly versions of the maps.

Steeped deeply in Midgard-lore and set against a fascinating landmark spiced with subtle humor that doesn’t detract from the seriousness or concise nature of the fluff, Christina Stiles once again proves why she’s one of the top writers out there – especially the first encounter is unconventional and carrying some rather interesting, unforeseen repercussions if handled poorly by the players. Fluff-wise, this is a glorious module and the solid statblocks do their part in making this work out. That being said, the main locale of the module is simply not that inspired – the ziggurat could have used some unique terrain-features: Perhaps life-draining stones that suck blood? Dream coral dust in the air, resulting in hallucinations? Something along that line would have made this module simply glorious! As written, it turns out to be a mechanically not too interesting, but incredibly atmospheric piece of adventure-craft for a price that is a true steal.

My final battle will hence be 4.5 stars – though I was contemplating hard whether to round up or down, I opted for the latter in this case since the primary locale could have used some unique terrain feature/property to set it further apart.