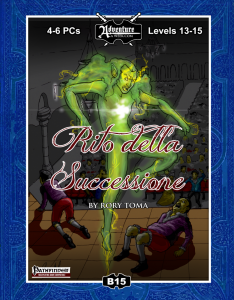 This being an adventure-review, the following contains SPOILERS. While not per se an official Freeport-adventure, the City of Pirates is essentially the default setting for this module – not required, but it does add to its appeal if you do use the city. Now that out of the way, what’s this one about?

Well, the basic background story is that a conflict between one Rickard Burbage and a powerful banker/mage called Gustavo DoBrussi turn sour – the former’s affair with the latter one’s wife is about to be turned  into a comedy by Roberto Cofresi, another wealthy citizen of Freeport. A twisted plan was thus spun, one the PCs may thwart – the remodeled opera-house of Cofresi and Burbage will try to perform a lost play of the legendary composer Donadrien – said composer’s plays tend to be accompanied by disaster and thus no one would seriously question the appearance of DoBrussi’s instrument of revenge.

Unfortunately for the wizard, the PCs are invited to the premier in the fully mapped opera house (including player friendly maps – neato!) – and lo and behold: The “Ghost of Dandrien” shows up, trying to wreck havoc – only to be dispatched by the PCs – if they manage to move through the panicking crowd. Unfortunately, Cofresi bites the dust in the chaos and thus, the PCs have a murder investigation on their hands – at the behalf of Burbage, of course. Contacting the Shipping news (Freeport’s newspaper) or the Sea Lord’s guard and the temple of knowledge firmly roots the module in rather freeportish lore and sooner or later, the PCs will have gathered enough information to find out about Burbage’s indiscretion – which, of course, puts DoBrussi high on the list of suspects.

The Cofresi-family, in the mean-while, are mourning and point the PCs towards Roberto’s studio, where undead thugs may ambush the PCs – and there’s also an extremely capable wildcard assassin shadowing the PCs… The trail leads towards warehouse Pawn, where they may acquire both another clue towards DoBrussi creating undead – and the information that Cofresi’s box was bought by Gustavo. But only if the PCs manage to properly break into the shop and not fall prey to the deadly scavenge golem waiting for them.

When trying to confront DoBrussi, the trail leads back to the opera house, where a ghostly orchestra is playing – the PCs will have to complete the rest of the opera -all while waves of negative energy wash from the crowd towards the PCs.. Via multiple skill-checks, smarts and so on, the PCs may solve this rather interesting climax: Further complicating matters, Gustavo want the PCs to kill the assassin he hired, while said assassin points towards Gustavo as the originator of the dastardly plot – either way, the PCs will be in for one exciting climax!

Editing and formatting this time around are great – I didn’t notice any significant glitches. Layout adheres to AaW’s two-column standard with colored boxes, thematically fitting stock art and the pdf comes fully bookmarked. The cartography is, as always with AaW-modules, nice, but not their best work.

All right, let’s get to the positives first – author Rory Toma obviously gets Freeport and per se has a nice, albeit not particularly complex investigation in the wings here – and the climax is made of awesome and win – combo-puzzle/final fight? Yes, please! And there is nothing wrong with the simple investigation – with one caveat: The level range: At levels 13 -15, PCs will a) have reputations for their power and b) a vast host of magical means of information gathering and means to bypass the already easy investigation – and the module doesn’t really address that. In straight-forward kill xyz-modules, I can live with that, but in this case, it simply hurts the module. Indeed, the module feels not epic enough in scope for its level – very local, it would probably work better on a low-to mid-level range regarding its concept.

So yeah –  craft-wise, the lack of help regarding spells/bypassing capabilities is a severe flaw in my book, whereas the local scope feels slightly misplaced – which is a pity, for the climax is AWESOME and probably well worth checking out if you’re interested in such a complex and weird final fight. With some more polish and restructuring, this module could have easily scored 5 stars, but as provided, it falls short of its potential and thus, I’ll settle for a final verdict of 3.5 stars, rounded down to 3 for the purpose of this platform.