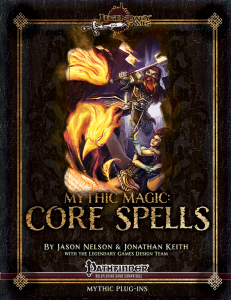 Now I’ll come clear from the beginning – while I love cinematic scenes, to me it is REGULAR guys accomplishing these feats of derring-do what makes them epic in the first place. I’m a bit of a mythic skeptic and while I have run my fair share of mythic scenes (crashlanding a flying fortress through the defense-fortresses and armies as a culmination of a holy war in my last campaign, to name one), they have to be earned – becoming mythic is something only a scarce few should accomplish and honestly, I was rather afraid that Mythic Adventures would up the ante too much. Thankfully, the rules allow for a relatively tight control on how much mythic powers become available and hence, I can get behind the system…only problem being that one hardcover was simply not enough by any stretch of the definition: Whether its monsters, paths or spells – there simply wasn’t enough space to cover mythic rules in the level of detail I’m comfortable with. Enter this book, among others.

With lightning-quick speed, Legendary Games have delivered ALL the missing core-spells, upgraded to their respective mythic variants, but before we take a look at them, we are introduced to two feats, one of which unlocks mythic cantrips (what may seem as a contradictio in adjecto, but more on that later) and a feat that allows you to apply mythic power to scaled spells – which is brilliant: Communal, mass, improved etc. – twice your mythic tier of such variant spells are learned, adding more fuel to burn for casters. We also get a new 1st tier-ability with Mythic Minor Magic as a bonus mythic feat or Mythic Spell Scaling – i.e. a way to get easy access to both new feats.

Next up are spell-lists by class – Bard, Cleric, Druid, Wizard etc. – including domain-lists, bloodline-lists etc. – as a cool benefit, each of the spell-lists mentions the respective page upon which the mythic spell can be found and is additionally linked to the page – one click and the pdf puts you on the page: Kudos for making this so easy to navigate. Now, of course the Mythic Adventures-spells from the hardcover are not in here, but after using this pdf for a prolonged time, I honestly wished my hardcover of Mythic Adventures would be that easy to navigate.

But that’s not what interests you now, is it? What about the spells? Well…each and every spell from the CORE-book that’s not covered by Paizo’s Mythic hardcover has been tackled – several of which with options to augment them with or without mythic tiers required – usually 3rd, 4th or 6th level, with some examples like Dominate Animal providing an upgraded augment unlocked on 6th mythic tier, allowing you to highjack the long-time (1 day per level rather than an hour)-dominated animal’s senses as a swift action sans ill-effects of disorientation.

Now I have an issue as a reviewer here – as much as I’d like to, I cannot cover each and every spell herein without blowing this review up to unprecedented length, so let me instead provide some samples to give you a good idea of what to expect from these pages, all right?

Let’s take Deathwatch as an example – this spell allows you to roughly determine the percentile hp of the creatures still remaining: above 90%, 90 – 30% and below 30% and also shows negative levels and con drain/damage. Delay Poison adds half mythic tier as a bonus to saves versus the poison once the spell has run its course, whereas Delayed Blast Fireballs, much like many damage-dealing spells, have their damage-dice expanded and may also be augmented at 3rd mythic tier to instead detonate multiple times for less damage or at 6th tier, further expand the damage-dice when powered by mythic power and even ignore resistance and immunity to fire. Now I mentioned cantrips – so what about light? Apart from light, mythic power equal to an incoming darkness-descriptor spell may be used to counter darkness-effects as an immediate action via this spell.

Prismatic Walls in mythic versions afflict foes close with prismatic spray and later extend the range of said zone of death further. Harder to destroy Prying Eyes with darkvision and resurrecting allies can now be done with less costly materials by using mythic power. One central rules-theme would be the dissolution of HD-limits, increased damage-dice, ignoring immunities, adding mythic tier-score to effects, extending AoEs and generally more flexibility though that does not apply to all of the spells, with variety comes a necessity to reflect this variety in the respective mythic spell designs. Of course, interaction between mythic invisibility and mythic see invisibility as well as how they interact with non-mythic versions are covered, even beyond the latter’s ability to reduce concealment miss-chances. These showcase well the level of detail required for a this broad coverage of spells.

In fact, while there are unifying themes among the spells, the augments and mythic versions are surprisingly varied while still maintaining a distinct voice of rules that lends a sense of wholeness to the pdf’s mythic spells.

Editing and formatting are very good, I didn’t notice any significant glitches apart from minor issues like a letter that was supposed to be bold not being bold – nitpicky gripes at best. Layout adheres to an easy-to-read full-color 2-column standard, with neat full-color artworks mixed with pencil-drawings in b/w. The artworks are awesome, but some you may have seen in other Legendary Games offerings and the mixing of both styles detracts slightly from the otherwise perfectly unified look of the pdf. As a layout-peculiarity, page 64 is only half covered – there seems to be an illustration missing. We get this offering in an additional, more printer-friendly version and both come bookmarked excessively, which, alongside the immensely useful linked spell-list result in this pdf being superbly useful and easy to navigate.

This is beyond ambitious. Within record time of the release of Mythic Adventures, Legendary Games has released this massive book of CRUNCH. Of in your face, no-frills, full-blown crunch. As a reviewer, books like this are WORK – crunching numbers, looking for discrepancies. With that and my designing-experience, I can attest that this book must have been a chore at times to create and it speaks of the diligence of designers Jason Nelson and Jonathan Keith that they managed to get this out as fast as they did and in the quality.

Now let’s get one thing out of the way: Yes, this is not a particularly cheap pdf – in fact, it is rather expensive. But what it covers also makes this not just AN expansion for mythic spellcasting, but rather THE expansion: With diversified augments, the mythic spells herein are actually much more eclectic in the options they allow than basic, non-mythic spells, hence making casting these spells much more enjoyable. Beyond that, this pdf covers so many spells and does this in a way that makes this supplement look like a chapter that has been cut from Mythic Adventures – the massive array of mythic spells herein should not be considered optional for a mythic campaign, but rather as a required collection. Is it perfect? No, but it succeeds with bravura at its given task and while it may not be a cheap offering, if you’re playing a campaign using mythic rules…then your group needs this pdf. And yes, the price-point hurts, as do the scarce few gripes I could muster – but still: My final verdict will clock in at 5 stars – How else rate a supplement for a mythic campaign that is NOT optional and may be considered a required expansion-chapter of Paizo’s hardcover? If you run a mythic campaign, then this should be considered a required purchase.

You can get this REQUIRED supplement for Mythic Adventures here on OBS and here on d20pfsrd.com’s shop!