EZG reviews It Came from the Stars Extras Pdf

It Came From the Stars Extras 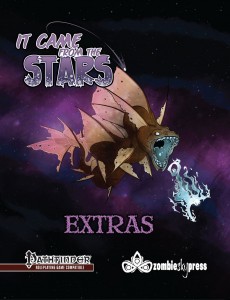 The Extra-pdf for “It Came From the Stars” is 34 pages long, 1 page front cover, 1 page editorial, 1 page ToC, 1 page SRD, leaving us with exactly 30 pages of content, so let’s take a look, shall we?

We kick this off with a new base-class, the Untouchable, who gets d8, 4+Int skills per level, no armor or weapon proficiency,3/4 BAB-progression, up to +5 AC, CMB and CMD while unarmored and unencumbered and have all good saves. Being touched by the weirdness, the Untouchable is surrounded by a nimbus that provides torch-like illumination and negates your need to eat, but also makes it impossible to trigger, ingest or gain any benefit from a magical item that you must hold or wear and can’t make direct attacks versus foes, including AoOs – no spellcasting with attacks rolls, no unarmed strikes, but you do count as having Improved Unarmed Strikes for feat prerequisites. With the class being prohibited from making any attacks, the class needs another feature – the extraordinary ability Revanche. Revanche uses Dex instead of Str, but otherwise is handled like regular attacks, including rules for iterative attacks etc. If you have revanche attacks remaining, you may 1/round as an immediate action attempt to parry an attack versus you or an adjacent target – if your attack surpasses that of the incoming attack, you manage to deflect it. At 11th level, you may even thus parry spells and spell-like abilities requiring attack rolls. Furthermore, you may attempt to deflect an attack thus parried to the originator or another adjacent source via your revanche attack -this follows the formula of immediate actions without explicitly being one – a concept that might take a bit to wrap your mind around. Alternatively, you may also execute a combat maneuver in lieu of your regular revanche attack. Executing more than one revanche attack per round counts as a full-round action.

In order to make proper use of this ability, the Untouchable learns to execute an additional move action per round, which would make this class grossly unbalanced when multiclassing – thanks to the compulsory nimbus, this pitfall is averted, though. At 2nd level, the Untouchable learn to provoke AoOs on a failed save, also imposing increasing penalties on the target. At 3rd level, instead of regular revanche-attacks, you may CMB your adversaries with meteor swarms as a result of being attacked, resulting in a devastating throw that deals damage that scales up to 10d6 on 19th level and you also learn to execute a 5-foot step in lieu of a revanche attack or swap places with an ally as a move action. At 4th level, the Untouchable also gets a void pool similar to the starseed, though one that is more defensively inclined, offering a 50% mischance [sic!] for one round or temporarily increase AC and skills. Like the starseed, expending the final point results in a negative level. Also at 4th level, class level instead of BAB is used for CMB and CMD. At 6th level, redirecting ranged attacks becomes possible (with scaling ranges throughout the levels). You can also clad yourself in an either cold or fire damage-based aura by expending void points or grant yourself scaling DR. At higher levels, you may turn invisible or suppress sound and at 16th level, you may even extend your evasion to your allies – or make foes more susceptible to failed saves – a kind of anti-evasion, if you will. Have I mentioned the level 18 ability to create a singularity to pull foes towards the Untouchable?

After this extremely uncommon class, we are introduced to 2 new Moon Child houses, the House of the Flaring Sun and the House of the Hidden Moon – Sculpting frozen light and using holograms/illusions or creating a limited clone of yourself (e.g. for spying purposes) and similar stealth-associated abilities – now added to the arsenal of the Moon Child.

We also get new archetypes, with the summoner now being able to become the “Mouth of Mad Ruin” – tapping into the cancerous ruin of a vanquished, desolate reality beyond our perception, these summoners may 3+Cha-mod times per day tap into this broken reality to enhance their eidolon – at a risk that potentially even may kill the summoner, but also offer vastly powerful benefits -a risky gambit for fans of chaos magic, if one that could have used more entries than the 15 on a d20-table provided. Druids may now opt to become Doorways to the Howling Other – and oh boy, I love them – suffused by an elder star’s seed and nature, these druids can no longer be healed by regular means other than their own healing and, when utilizing their abilities to heal the wounded, these beings are tainted temporarily by mutations, More importantly, summoned creatures are further enhanced by new abilities from a selection of unnatural adaption effects that reflect the creature’s otherworldly alienness. Full of story-telling potential…

We also get a new trait with “Erupting Flesh Mastery” for the Symbiote-Synthesist-summoner: The trait allows the compound creature to be treated as a variety of creatures in addition to counting as outsider and aberration, whereas the second option may force you to summon your eidolon – as a benefit for either of these drawbacks, the summoner may call his eidolon +1/day as a move action.

Next up would be 3 new feats, one that unlocks a slot for untouchables to use either one type of wondrous item or potions. The second feat allows the new Druids that act as doorways to alien vistas to add an additional unnatural adaption-benefit to their summons and one that nets +2 to Craft (void Tech) – since the skill has never been introduced and only acts as a substitute for Crafting-feat-prerequisites, this one is filler at best and not up to the coolness prevalent in the rest of the pdf. 3 new major symbiote feats are included as well, allowing for a detachable symbiote familiar, wings or an extra head with an additional bite attack, should you already have one.

Gamemasters also get more tools – from ideas for Battleworlds, domed planets, worlds where flight is common, we get even more glorious ideas to develop adventures around than the basic book offered. Beyond that, we also get 4 different alien flora and fauna hazards – constricting mold, living ice, insects that consume your brain and take over with hiveminds or hallucinogenic pollen releasing plants make for neat hazards to add to your array. The bestiary also offers some interesting new critters with the CR 4 asteroid-eater swarm that survives the void with asteroids to the 5 types of falling star fey (spanning CR 2 to 15), fey bonded to a star and glistening in their star’s fire. Finally, we get the CR 19 Deadstar Golem, crafted from the superdense core of a white dwarf – an engine of destruction that will put adamantine golems to shame and is surrounded by a gravity well.

Editing and formatting are good, though not perfect – I noticed some minor glitches, though none that kept me from properly appreciating this pdf. Layout adheres to the glorious 3-column landscape standard in full color used in the main book. The pdf comes fully bookmarked and, as a first for any “web-enhancement”-style pdf, this one is full of awesome original pieces of full color artwork – among others, original pieces for the new class, some items and one for every new creature – kudos! On the down-side regarding layout would be the tendency to leave 2/3 of a page empty at the end of a chapter.

I’m not a big fan of the fact that the 2 houses of the Moon Child had to be delegated to this pdf, but seeing their quality, I won’t complain here. The archetypes are cool, as are the other tidbits herein. Now the Untouchable…is perhaps the strangest class I’ve reviewed so far -complex, strange and VERY specific, it is definitely not for everyone with its weird restrictions and uncommon mechanics. that being said, I really, really like the execution – but there is one major issue I see with its design -it’s terribly linear, more so than even the starseed and I wish it had codified its abilities in a way that allows for more active decisions of the player. That being said, it still is a thoroughly innovative class that dares to offer something rather radical and that is something I can get behind – while not for everyone, it will be exceedingly fun to play for mechanically versed players.

The creatures and ideas herein are cool one and all – and in any other context, I’d probably be gushing about this pdf. When taken back to back to “It came from the Stars”, this pdf feels like the B-side: Good, if a bit experimental, it enhances its base product, but doesn’t reach the abject level of awesomeness of the base book. That out of the way, it should be noted, though, that this raises the bar regarding expansion-books of bigger/patronage projects, offering great artwork and production values. This pdf should be considered the mandatory expansion of the main book – you want to have this as well and it in the end, offers a lot of bang for your bucks. My final verdict hence will clock in at 4.5 stars + seal of approval, rounded down to 4 – Note, though: It should be used in conjunction with the main book, as an extension and really, as part of it – If you do get both, just take this as the expansion that further improves your overall experience – may there be more “Weird Cycle”-books soon!

You can get this expansion to It Came from the Stars here on OBS!