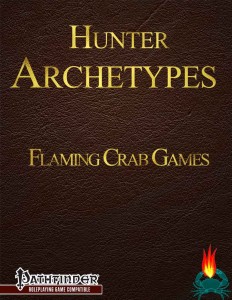 This little pdf clocks in at 9 pages, 1 page front cover, 1 page editorial/ToC, 3 pages of SRD, leaving us with 4 pages of content, so let’s take a look!

Sans much fanfare, we are introduced right away to the first archetype for the hunter class, the Big Game Hunter: Instead of precise companion, these guys get a scaling AC-and Ref-save bonus versus creatures one or more size categories bigger. Instead of teamwork feats at 3rd, 9th and 15th level, the archetype receives bonus damage (first +1d6, later +1d6 per step in aforementioned progression) versus creatures two or more size categories larger. Starting at 8th level, the hunter can grow the animal companion to huge size, lasting 1 minute per level; if the companion is dead, the hunter can become huge. This is problematic in various ways: A) Enlarge Person usually has a limit for a reason – growing to huge is pretty much insane. Progression of natural attack damage and the like to this size is pretty uncommon, so a little chart and help would be appreciated – while my group can handle the like on the fly, I guarantee that less-experienced groups have the game grind to a halt here. Now the companion is ultimately still a pretty limited being, so matter how good it is – but the hunter’s self-grow-trick…is insane and begs to be abused like crazy. On a nitpicky side, the spell mentioned is not properly italicized. 10th level nets evasion and bonuses while close to one another. Odd archetype that begins cool and then gets a game-changer/issue-hoard.

Harmony Enforcers need to be true neutral and may detect alignment. They replace wild empathy and teamwork feats gained at 6th, 12th and 18th levels with the option to smite creatures that have no neutral in their alignment-axis – i.e. chaotic good and evil and lawful good and evil. At 10th level, the companion gets the counterpoised template instead of raise animal companion and at 17th level, the archetype may immediately reincarnate foes slain via the smite, shifting the creature one step towards neutrality. This may only be used once a week and lacks a CL-information, should be SP, not SU, lacks italicization of the spell and has no duration – reincarnate usually takes 10 minutes and costly materials to cast, with the formed body taking 1 hour to form – yet the ability says “choose to immediately reincarnate his victim as the reincarnate spell.” – does this mean instantaneously? I’m a bit confused here. Other than this guffaw, a long overdue champion of neutrality-type of archetype I liked.

The Nature Herald’s second column is 2/3rds blank space, which is a bit annoying regarding paper-management if you’re like me and print these out. The archetype receives Cha-based spellcasting and replaces teamwork feats with 3+ Cha-mod Summon Nature’s Allies as SPs, scaling logically and well-balanced with the levels and even sporting an anti-creature-SPAM-caveat – kudos here! Animal focus is modified to apply at half potency to allies via a chant and may be maintained for 3+Cha-mod rounds, +1 at 2nd level and every level thereafter, counting as a surrogate bardic performance for prereq-purposes, managing to include the audible component – and no, does not require a shared language…obviously. While this one is powerful, it is also a pretty unique take on a kind-of-bardic hunter I do enjoy.

The Poacher, then, would be the less scrupulous hunter, gaining a massive, well-balanced alternate array of animal foci, poison use and ranger traps in lieu of precise companion and teamwork feats, later learning to quickly lay these traps AND lace them with poison. Nice one – complex, difficult to craft and tinker with focus-list – no complaints!

Finally, the Tandem Raptor gets an avian companion and thus, obviously, a wide array of avian foci, once again providing a diverse and detailed array of options that run the gamut from skill-bonuses to dodge-bonuses to AC and attribute-enhancers, once again showing a solid grasp for values. Instead of swift tracker, dealing damage to a foe makes the target easier to hit for the avian companion and as a capstone, this is escalated to counting as flat-footed for a pretty neat hawker-style archetype.

Conclusion:
Editing and formatting are pretty good – at this point Flaming Crab Games’s first experiences obviously did bear fruit – there are less problematic components, though the lack of italicization bother me. The 2-column layout sports a brown border and some archetypes sport unnecessary blank spaces at their end – not a fan of that. I do like the bookmarks provided in spite of the brevity, though.

C.J. Withers’ Hunter Archetypes are a solid offering with some minor hiccups – but that should not necessarily deter one: The work-intense foci-lists and some truly nice concepts render this, if not a perfect, then at least a worthwhile little pdf – translating to a final verdict of 3.5 stars, rounded up to 4.

You can get this inexpensive little pdf here on OBS and here on d20pfsrd.com’s shop.