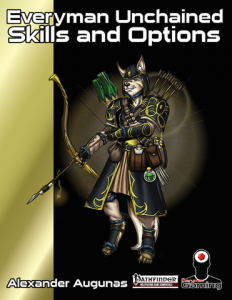 This installment of Everyman Gaming’s support-series for Pathfinder Unchained clocks in at 17 pages, 1 page front cover, 1 page editorial, 1 page SRD, leaving us with 14 pages of content, so let’s take a look!

So, if you’ve been experimenting with skill-systems from Pathfinder Unchained and your group is like mine, you’ll have had an experience that mirrors that of author Alexander Augunas – backlash. In practice, none of the skill systems worked for my game. I’m not judging you if the suggested systems work for you and yours – just stating it does not work for everyone. Still, several design-ideas provided in the skill systems doe have some merit – and as such, I considered it a pity to let them fall by the wayside. The author seems to agree with me and has hammered out a system of skills that (hopefully) utilizes the best of the classic and unchained systems- so how does it work?

At each level, a character gets skill ranks equal to the class’s baseline, with a cap of ranks being equal to your HD. Each class has favored skills, class skills – if you have one rank in them, you gain a +3 bonus to them and multiple such bonuses do not stack from multiple classes – so far, so good. The number of skill points gained per level depends on the skill category of your class – poor, average, good or excellent, with Int-mod added. A handy table does provide these, and, as before the ranks per level range from 2 (poor) to 8 (excellent). At 1st level, 2nd level and every 4 levels thereafter, you determine a skill group, as listed on another handy table – Tinkering, e.g., includes Craft, Disable Device, Spellcraft and Use Magic Device. 1st level nets the background skill group.

In order to select any skill group other that the background skill group, a character needs to possess skill ranks in any one of the skill group’s skills greater than 1/2 the character’s level. Each level, a character gains 4 ranks to spend among the group skills exclusively. However, there is a further restriction imposed on group skills – you can only invest group skill ranks into a given skill equal to the number of skill groups you have that include the skill. It should also be noted that the fighter now receives more skills per level, with poor skills being now primarily the providenc of spellcasters (and paladin + magus), thus maintaining the notion that they use their magic for flexibility as opposed to utilizing skills for various means.

Favored Class Bonuses, when used with this system, remain at +1 hp/skill rank or alternate benefits.

The pdf then goes on to provide a variety of new favored class options for ALL classes – a total of 5 are covered for all Paizo-classes, also including Alexander#s Dragon Paragon (from the Dragon Companion Handbook), the Mystic (from Amora Game’s Liber Influxus Communis) and his superb Occultist (Pact Magic) and Technician-classes (from Age of Electrotech). The diversified favored class options provided here add rather complex choices to the mix: Alchemists, for example may choose between +1 formula, +1/2 bomb damage, +10 minutes mutagen-duration, 1/6 discovery or 2 alchemist class skills, which both gain +1/2. The options generally are more than solid and add a welcome tactical dimension to leveling up – though, the nitpicky bastard in me can’t help but comment on minor hiccups like the samurai class’s FCO referring once to the cavalier class – nothing grievous mind you – the content herein is not impeded in functionality. Companion-based options are also in here, with 5 choices for customization. Beyond these, the pdf does provide a huge array of racial options that further expand the favored class options available, with two per level provided for even the most exotic of races. If you’ve been counting – that amounts to 10 (!!!) choices available for every character per level as opposed to the base system’s usual 3. But that’s not where it stops – the system also provides further universal options: +1/3 of a save, max +2; +1/6 bonus feat from a limited list, decrease a weapon’s non-proficiency penalty by 1, +1/3 on crit confirmation rolls with a chosen weapon, +1/3 racial trait, +1/4 SP use per day gained from a racial trait or feat or +1 energy resistance for an energy the character is resistant against via a racial trait. This totals at potentially 17 (!!!) options to choose from.

4 feats are provided to work with this system:

Multiple Companion Training allows you to extend FCOs for a companion chosen to all companions. Eclectic is potentially problematic – the text is “Choose an additional favored class and gain +1 in any favored class option that you qualify for whenever you take a level in that class. If you choose a class in which you already have levels, the benefits of this feat are retroactive” However, favored class options do not necessarily net you +1, but fractions thereof – I get what this feat tries to do, but its wording is problematic. I do enjoy that humans may take it multiple times, though. Fast Learner has been streamlined for use with the system and finally, the story feat Nemesis is part of the deal.

The multiclassing system presented in Pathfinder Unchained, essentially a kind of gestalting lite, may not fit every campaign – I know that the balance ramifications of some combos most definitely do not gel with most campaigns I run. At the same time, for quite a few campaigns, this may actually end up being exactly what you’ve been looking for – so yeah. I’m personally weary of it and consider it too roughshod for my own tastes. This does not keep me from enjoying the inclusion of new such options herein, though – Alex’s classes, from Dragon Paragon to Occultist, Technician and Mystic, receive their information for use with exactly this system in here as well, unlocking them for campaigns utilizing this design paradigm. So far, I only have two sessions of experience with this multiclass-system, so the finer points of balance ramifications may be slightly lost on me, but from what I can glean, the direct comparison between the options provided herein and those used in the base book yields a power-level that does not exceed that presumed by the options presented in Pathfinder Unchained.

Editing and formatting are top-notch, I noticed no significant glitches. Layout adheres to Everyman Gaming’s two-column full-color standard with beautiful, original artworks by Jacob Blackmon -for once, btw., no kitsune! OO  EDIT: Mea Culpa: That’s a kitsune on the cover; I thought it was a canid/dog/wolf-folk. I stand rectified! The pdf comes fully bookmarked for your convenience.

Alexander Augunas skill system has polarized my group and indeed, I myself oscillate between its benefits and slight drawbacks. But first, let me reiterate and emphasize that the system, as presented herein, simply is superior to everyone of the takes presented in Pathfinder Unchained, benefiting imho from the strengths of the individual systems and refining them. Now, whether this system is a god-send for you or not very much depends on the preferences of your players – do they like planning character-progression, tinkering with the nuts and bolts, getting synergies out of material etc.? Then they will probably love this system. The skill groups and skill-group exclusive ranks allow for satisfying planning of skill-progression in a way that actually can enhance roleplaying – if a character needs the occult-skillgroup to make the most of his next level, in-game studying the material can lead into pretty much awesome, organic character-developments. The skill-system provided here can work as a catalyst for roleplaying and I adore this system for it. The downside is evident – you need to plan, carefully, your progression – players that do not want to tinker much, that just want to play, tend to dislike the additional complication this brings to the game – and, obviously, when there are choices, there are ways to choose badly. While you won’t cripple a character with bad choices, you can end up unable to spend group skill ranks gained, which may prove to be a source of frustration. This is a system-inherent issue, though – one generated from the additional skills and the structure.

The favored class options with their vast array of options for each class at every level, including racial ones, is absolutely awesome in my book – while I consider some options slightly stronger than others, ultimately that holds true for regular favored class options provided for vanilla pathfinder. The massive customization options definitely enhance level-ups in intriguing manners and have no significant drawback – apart from the fact, that I would have loved some guidance on how to use already existing FCOs within the context of this system.

The big question, then, would be how to rate this – and I’m somewhat at a loss. Usually, when I can’t decide, my group helps me shape my opinion – but my players are evenly divided. And I pretty much, as a reviewer, am likewise divided. Make no mistake – as a private person, I love tinkering options like this, where some complexity and choices reward smart planning. At the same time, I can understand disdain for what some might consider a needless complication. Ultimately, I decided to rate this according to its intention: How does it hold up as an alternative for the skill system for people looking for something different? After all, it makes no sense to rate a system down due to concerns of people who do not see a need for it in the first place and who’re content with the status quo – after all, why then get this pdf?

Well, this holds up better than the base-line provided by Pathfinder Unchained. And a similar conclusion can be drawn for the favored class options provided herein. And what more could I ask conceivably of such a small pdf? My final verdict will hence clock in at 5 stars.

You can get this cool, alternative skill-system and the diverse FCOs here on OBS and here on d20pfsrd.com’s shop!