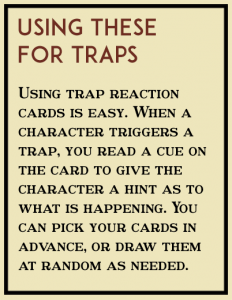 This is something different, providing system-neutral game aid cards. The pdf comes as an 6-page pdf, with half the pages depicting the back cover of the cards noted; the other half the respective cards.

Each page presents 9 cards back covers, or 8 cards. Trap triggers are codified in three ways: Hazards, magical triggers or mechanical triggers. One of the 9 cards presented per trigger type notes the general type, and the cards per se each sport a variety of suggested cues to clue in the PCs that something is amiss before things become deadly.

To give you an example, mechanical movement traps may note that the walls have have just moved, that the stones under your feet moved, a heavy grinding noise, etc. If you have a tough time improvising these, then this will be helpful indeed, as particularly more rules-heavy systems tend to be rather sparse regarding descriptive text. In short, you get a total of 24 cards, each with a variety of descriptive cues.

The cards, much like the conversation cards, come with with an archive that contains the . PNG-versions.

….
There is a bit of an issue here. The cues presented, while nice, are ultimately just that – they don’t necessarily provide a particularly fine differentiation between traps. Moreover, I can’t really glean any reason why these are cards in the first place. You see, you kinda need to know already the general type of trap your card is supposed to correspond to for the proper cue, and printing cards as well as having them all lay out behind your GM-screen is…inconvenient.

Frankly, small tables for general trap triggers would have made much more sense and have been a more paper-friendly solution to the issue this attempts to remedy. You could have fitted all content from Michael McCarthy’s trap cards on a single page of small tables. Randomly drawing cards and improvising traps based on trigger is a bad idea in most systems, as you require the mechanics and several systems differentiate between means of detecting them, so this is kinda limited.

The supplement has another issue. Out of some strange reason, the backs of the cards are crisp and clean, while the text on the front, at least in the pdf, is surprisingly pixilated. As much as I can see the conversation cards work well for some groups, I can’t say the same for these trap cards. That being said, at the low price of $0.99, I can settle on a verdict of 2 stars. If you’re looking for some cues for trap-trigger descriptions, this may be worth checking out.

You can get these cards here on OBS.