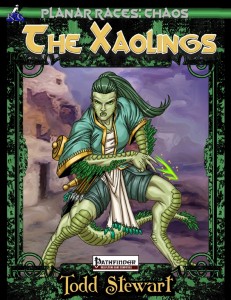 This racial supplement clocks in at 15 pages, 1 page front cover, 2 pages of SRD, leaving us with 12 pages of content, so let’s take a look, shall we?

So what are the Xaolings? If the name wasn’t ample clue – they’re beings infused with or sired by the essence of Limbo and its chosen caretakers, the Proteans. As such, their looks are extremely varied and the chaotic influx is also represented in the (thankfully present) age, height and weight-table with massive variances in maximum age. Nice! Beyond the usual takes on relationships with other races, the suggestions for looks here would be awesome – elves with slithering, serpentine shadows, slitted pupils that change colors – quite a few neat ideas here. And yes, there also is information on nomenclature etc.

Racial trait-wise, Xaolings get different heritages – those descendant from Naunet receive+2 Dex and Con, -2 Wis, darkvision 60 ft, +2 to bluff and escape artist, 1/day + 1/2 class level to damage, acid, sonic and electricity resistance 5 and count their cha as +2 for the purposes of the aberrant, maestro and protean bloodlines. Xaolings bred from Imentesh get +2 to Dex and Cha, -2 Wis, darkvision 60 ft, +2 to bluff and escape artist, acid, sonic and electricity resistance 5, treat all sorc-spells of caster level 1 and 2 at CL +2 if they have the aberrant, maestro or protean bloodline and may, as a standard action 1 min/level change shape, gaining low-light vision, scent and swim speed 30 feet. Weirdly, the ability specifies also that the race gets darkvision 60 feet, which it already has – a glitch. This one feels slightly too strong for my conservative tastes, but isn’t yet broken.

Xaolings of Keketar descent get -2 Dex, +2 Wis and Cha, darkvision 60 ft, +2 to bluff and escape artist, acid, sonic and electricity resistance 5, treat their class level as +2 for the purposes of level-based calculations of domain abilities from the liberation, madness or trickery domain and its subdomains or for the purposes of the dark tapestry or outer rift “mnysteries.” They also get a touch attack that sickens a target for 1d4 rounds sans save. All Xaolings are native outsiders.

We also get 5 alternate racial traits – better stealth, +2 to Craft and Disable Device, natural armor +1 in lieu of energy resistances or +2 to swim and fly are okay. Getting constrict and a reduced movement for just the skilled racial trait feels excessive to me. I’m not a fan of granting playable races the powerful monster abilities. We also get FCOs for Barbarian, Bard, Cleric, Magus, Oracle, Rogue, Sorceror and Witch.

We also are introduced to two new racial archetypes – the Chaos Rager, who deals additional damage on critical hits against lawful targets and replenishes rounds of rage when criting while in rage. And yes, this can be bag of kitten’d with a high-crit-fishing build at higher levels – the more attacks you have, the better the chance that you manage to score more than one crit per round, especially since they crit more easily against lawful targets. They also get better DR and a deflection-bonus. I’ll be honest, this rubs me the wrong way. I don’t like specialized “bane of creature type x”-archetypes or classes – any specialization beyond the extent of the ranger will result in either the player feeling like they wasted the choice (if not enough target creatures show up) or the DM feeling somewhat annoyed. Add to that the *exceedingly minor* kitten-failure and we have an archetype that is okay, but nothing to write home about. The cleric archetype, the Singer of the Manifold Wyrm receives only one domain from a limited list, only one proficiency (in her deities’ favored weapon), but instead gains a chaotic-themed channel effect that automatically BOTH heals non-lawful creatures AND damages lawful creatures, but only at d4 and up to a maximum of 10d4, but also may impose negative conditions on eligible targets with fewer HD than the singer. They also receive a voidworm familiar. Okay, I guess, but once again – not a big fan, mainly because it does not feel like “Limbo” to me – the d4 delivers a relatively low fluctuation, the dual, alignment-based channel is okay if that type of mechanic floats your boat, but honestly, I’m not sold on the archetype.

We also get 9 racial feats – gaining backlash to attempts to influence you with mind-affecting abilities, 1/day roll twice on an ability/skill-check (+1/day per 5 character levels) unless you roll a natural 1, a kind of lesser fortification, +1 to damage and atk vs. lawful foes – those are okay, if not too inspired. Getting a prehensile tail on the other hand is nice (even though you’ll have seen that before), but gaining natural flight, even in armor, makes for a cool feat – especially since the level restriction maintains the base-line for unassisted flight, as the feat requires at least 7th level. What’s really cool is the option to 1/day announce prior to making the save to ignore one magic item effect, SP or SU to which SR usually would apply – now that is mind over matter and a unique trick. Compared, gaining blindsense 30 ft. at 10th level is okay. Now whimsical spell (metamagic) is one of those feats that could have been awesome, but isn’t. You have a 50% chance to boost CL by +1. If you don’t boost it, you instead reduce it by -1. This is further increased by +/-1 at fourth level and every 4 levels thereafter. GENERALLY, I love the scaling, chaotic theme here and it ties in neatly with the race’s theme. However, at the same time, this unpredictable spell can neuter your crucial cast and requires +1 spell-level. And it costs a feat-slot. Yes, the effects are powerful and flavorful and I want to like this one, but the execution feels a tad bit too weak for my tastes. It’s a good thing that the appropriate metamagic rods can be found among the new magic items, for there, the feat can shine -though I wished the mundane, lesser and greater versions of the rod had additional properties to set them apart – this gripe is cosmetic, though.

The False Keketar’s crown provides benefits for chaotic wearers, penalties for lawful wearers and we also et a nice staff featuring new spells (more on them below). The Ring of the Smirking Keketar is interesting– 1/day, the wearer can fail a non-harmless save against a save of a spell of a creature of at least 1/2 HD and the spell must be at least 1st level. If the character survives, the ring gains a charge. The character may expend a charge to reroll a save, 2 to reroll a critical failure. What keeps this from failing the “bash me” test would be the max limit of 3 charges the ring can hold.

The new spells are interesting, idea-wise – Chaotic Protoplasm can glue the target to one spot, rendering them unable to move and entangled while also dealing minor acid damage – per se nice, as is the chaotic duration of 1d3+1/round per 2 levels, though the utter lack of a skill-check DC or str-DC to free oneself makes the spell utterly op for first level. The same holds true for the level 4 acid fireball-like spell that AoE glues targets sans means of escaping. There is also a spell that nets a +1 luck bonus to atk, damage, saves and skill-checks. SNORE. A howl that confuses targets and a confusing babble are nice.

Editing and formatting are good, I didn’t notice significant glitches that detracted from my ability to understand the presented content. Layout adheres to RGG’s two-column full-colored standard and the pdf comes with thematically fitting stock art. The pdf comes hyperlinked and fully bookmarked for your convenience.

Todd Stewart delivers a per se rather cool race of chaotic native outsiders and the tie-in with the new Protean mythology works well. The base races, while a tad bit too geared towards specific roles for my tastes (especially the last), are more than solid and the alternate racial traits help customize the race. Now that may be me…but overall, the Xaolings didn’t feel that chaotic to me. While the fluff mentions quite some varieties in the look of the race, a slight more diversity (perhaps with a random element?) would have been rather nice to see. This is me complaining at a high level, though. Generally, I think I’d allow these races even in my very conservative game, so that’s a good thing.

Now where I feel the pdf stumbles (but does not fall), is in its supplemental content – the archetypes don’t really do anything interesting (though YMMV, as always) for me and don’t tie in with the three suites of racial abilities. Where are the mutations? The bodily flux? the tie-in to the distinct, daily racial abilities? The feats provide a filler here and there while generally being solid. Magic Items and Spells can be considered solid as well, though especially the spells, I’m sorry to say, a capital “B” boring – and they’re so close. their imagery is nice, here and there a cool mechanic glimmers, but the save-or-suck balancing of their terrain control makes some of them OP. What I also can’t fathom is this – Rogue Genius Games, of all publishers, actually has a glorious pdf on Chaos Magic – really good chaos magic at that. Where’s the tie-in? This is a wasted chance, but not something I’ll hold against the pdf.

I’m aware I’m a nitpicky guy here, but after the initial racial write-ups, which got me all excited about the race, I felt somewhat underwhelmed by what followed. Don’t get me wrong – the Xaolings are still a cool race, but the pdf falls quite short of what it could have easily been. My final verdict will clock in at 3.5 stars, rounded down to 3 for the purpose of this platform.