Magus of the Jade Oath 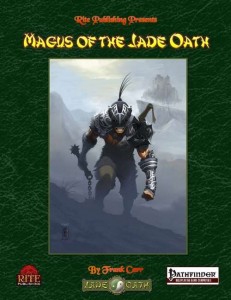 This pdf clocks in at 32 pages, 1 page front cover, 1 page editorial, 1 page SRD, leaving us with a massive 29 pages of content, so let’s take a look!

We kick off this supplement with a short piece in-character prose and continue this approach in the respective discussions of magi throughout the book, as written by one member of the Forbidden Mantis, formerly of the Beautiful Silk Tigers -and indeed, in lavish, captivating prose, we are introduced to the respective magi traditions of the diverse factions of the Lands of the Jade Oath. And indeed, the blend of arcane and martial feels as if predestined for a proper in-depth look in such a setting and here and there, the combinations of the schools, factions and abilities just rock – take the Jade Griffon Guard, who may, via a new arcana, deliver spellstrikes via their mounts, offering more storytelling potential via these traditions than one would expect – indeed, the wealth of organizations and ideas in the discussions of these alone suffices to power at least one, potentially more campaigns set either in the Lands of the Jade Oath or similar Asian settings.

Now I can’t get into the awesomeness of the fluff in detail sans bloating the review beyond all compare, but rest assured -it is glorious indeed and writing-wise actually quite a step upwards from the HotJO-main book. The pdf goes on to provide favored class options for magi and all the uncommon races provided in the Heroes of the Jade Oath setting.

Now the first archetype would be the curse-eater, who receives the misfortune oracle curse and may identify curses, spellblights etc. This curse essentially increases the botch-range anyone nearby experiences – think of the class as a kind of herald of misfortune akin to TPK Games’ Malefactor. As a damn cool idea, any beneficial spell cast on an ally that is 3rd level or higher carries either a curse or a spellblight with it – and no, these cannot be beneficial -DM-control is maintained and ensured. Now at 5th level, items in possession of the curse-eater become cursed and infected with spellblights as well. Now the catch is – as long as the curse eater wears his/her white ceremonial mask, spellblights and curses don’t affect the character. Now beyond that, the curse eater may, of course, eat curses – and that’s easy to screw up, mechanics-wise, especially since the curse eating, while requiring the expenditure of , spells, potentially regains arcane points. Alas, I found no way to break this via curses or hexes and at higher levels, the ability even can be used as an immediate action.

The archetype also features 6 new, specialized arcana – from acting as a magnet for curses and hexes and the like to opting to gain temporary DR instead of a point of arcane pool, temporary SR versus curses, locate creatures via the scent their magic items and spells leave on them and even steal prepared (or otherwise available/ spells known) spells from target foes temporarily – awesome! THIS is how archetypes should imho be – this one is so damn full of style and wrestles with highly complex and hard to phrase abilities managing to properly pull of the concept of curse-eating sans breaking the narrative potential inherent in these hazards. Wow. Seriously, one glorious beast.

Next up would be the Lantern Warrior, who gets diminished spellcasting and loses spell recall, but gets access to a cavalier’s order and at 4th level, also the challenge class feature. Nice. The next archetype would be the martial alchemist, who may utilize craft (alchemy) analogue to a full-blown alchemist – including extracts! No spells, as you can imagine, but a modified list that thankfully includes crucial classic of the magus spell-list. At 4th level, he even gains access to a discovery, but, of course, mutagens are out of the question. 4 exclusive arcana that include fast drinking, poison resistance and use and swifter poisoning are also part of the deal – one glorious take on the swordsman with the magic bottles/travelling apothecary/swordfighter.

The Menmonic Warrior gets access to 8 unique arcana – from tongues per arcana point expenditure to a confusion inducing touch, a wildcard teamwork feat (changeable as a standard action), a defensive prescience, better skill checks by delving into the akashic collective unconscious, temporary blindsight or inciting fear with a touch. High-level mnemonic warriors may even induce terribly crippling pain with a mere touch. At 5th level, they gain an adaptive feat they may change via the expenditure of arcane pool points. Here, a minor glitch has crept in – the end of the ability specifies “he gets another adaptive feat at 5th level and another one at 17th level.” -The 5th and “another” don’t work here – at 5th level, the ability is gained in the first place. At 11th level, delving into the collective unconsciousness for a selective amount of times per day is possible for minor auto-buffing. The archetype does pay for this flexibility with 3 bonus-feats, though. Once again, a glorious beast of an archetype, full of iconic fluff and cool crunch, but also one slightly on the strong end of the spectrum – the adaptive feats are powerful indeed, but at least they require the expenditure of finite class resources.

The Threadcaster has diminished spellcasting and imbues thread with arcane pool points to make mere thread into a lethal, terribly sharp weapon – through which the threadcaster may also deliver spells. 4 unique arcana further enhance the tricks the threadcaster has up her sleeve (haha) -using threads to supplement her acrobatics, climbing and flight, better entangling and grappling spells, dominating foes via a touch (puppetmaster-style) and whispering wind can be found among her tricks They may also spontaneously create snare traps with the threads (with or without a leash). Web of Defense is also glorious – by setting threads in the threadcasters square, she may increase her defenses and even generate a chance foes become grappled. This archetype is awesome in so many ways it almost hurts – all those iconic spider-themed ninja and characters you know from anime and WuXia-movies, all those deadly thread-users -FINALLY a way to play that! AWESOME! And yes, diminished spellcasting, less armor proficiencies and no knowledge pools feel like appropriate trade-offs. I NEED to try this one out.

The Warrior of Fortune is also awesome in many a way, gaining access to “improbable” abilities from Rite’s glorious luckbringer class as a kind of specialized arcana, spending arcana instead of moments of chance to power the respective arcana. Now while all the eligible arcana are provided (often with fluff-descriptions of the respective abilities!), here I can muster a nitpick – the abilities don’t explicitly state the amount of points or arcana they require, though a default of one can be assumed.

As a bonus for those using the rather cool sutra-casting rules from “Sutra Magic“, we get the new sheathe sutra that can actually temporarily make objects akin to bags of holding. The two spells also rock, with one creating a temporary bond of life between two characters that allows one to save those reduced below 1 hp by sacrificing their own vitality, whereas the second one can turn the tide of yin and yang by turning natural 20s into fumbles/failures.

Editing and formatting are top-notch – I noticed next to no glitches in this pdf. The pdf adheres to Rite Publishing’s two-column, full-color standard and is easy on the printer in grayscale. The pdf comes excessively bookmarked and the artworks provided are copious and diverse in style, but also stylish, thematically fitting and nice – and I haven’t seen them in other publications – kudos for the neat art.

Frank Carr has so far been mostly prominent with his work on Arcana Evolved, but this pdf is either testament to his exceedingly quick mastery of the system or the impressive editing and development prowess of Søren K. Thustrup. Either way, I did not expect to like this book. Once you’ve read as many magus archetypes as I have, you get bored easily. You get the “been there, done that”-feeling -fast. This books avoids this trap by actually being a good read. Seriously, even if you don’t plan on using it – the prose is captivating enough to carry the book on its own, the diverse organizations meaning that there is so much going on, so much to scavenge storytelling-wise, that you just WANT to read this. If you’re even remotely interested in Asian WuXia/WuShu-style setting. Now admittedly, this fluff takes up quite some space, but it is space well used and not something I’d consider a downside. Now the crunch is what I dreaded – and was absolutely WRONG to do so: Not a single one of the archetypes herein is bland or boring; I haven’t seen even one of these done before in this manner. The Threadcaster and a couple of other archetypes herein have to wrestle with rather complex abilities , wording-wise, and actually manage to get them right. Furthermore, the supplemental material, whether they be spells, the sutra, the luckbringer-crossover (which does not require you owning the luckbringer to use) – all of these conspire to make this pdf actually one that I WANT to use.

These days, getting me excited about an archetype book is hard; Getting one in front of me that actually makes me get pen and paper and immediately make a character – now that is even rarer. This pdf did exactly that. THRICE. While I’m still on the fence about the wildcard-style feats of the mnemonic warrior, the lost feats proved to in-game to be a harsher penalty than expected on the paper: It’s essentially the pay-off of depth versus flexibility and I’m game for that. This book surprised me in the most positive of ways. A highly-recommended must-have for fans of the magus, WuXia, the Lands of the Jade Oath or simply those enjoying complex archetypes that are more than just abilities, that live and breathe and…inspire. That’s the word. Inspiring. This pdf is glorious in all the right ways and hence receives 5 stars + seal of approval.

You can get these immesely flavorful options here on OBS and here on d20pfsrd.com’s shop.