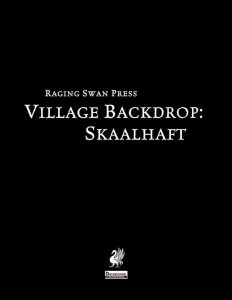 Skaalhaft is an utterly unique place – situated in the aptly-named blood bay, the place is a whaler’s village unlike any you’ve seen – instead of the more mundane prey, this should be considered to be a draker’s village…or a magical beast-er’s village…for while other places may be content with hunting mere animals, Skaalhaft’s population makes a living of much tougher and deadlier prey. The kills brought in by the powerful hunters (5 sample vessels with their own specialties are provided). It should be noted that we get information on local nomenclature, dressing habits and mannerisms, which adds some nice depth to the settlement.

As always, we get a proper settlement statblock for Skaalhaft – and considering the occupation of the vast majority of the village’s folk, the low danger rating (0) is pretty surprising. Then again, strangers come to this place to purchase all kinds of strange ingredients for alchemical and arcane practices. PCs that do their leg-work can unearth some lore about the village and there even is a wayhouse, where two of the wealthiest patrons of the settlement can be found – these, alongside 3 other NPCs, come with an expanded NPC-write-up: Sans stats, but with mannerisms, distinguishing features, etc. And yes, there is a proper market place section of items to procure.

Jeff Gomez’ Skaalhaft is a thoroughly inspiring little settlement: Its unique premise is employed in a rather evocative manner and makes sense – in a world where fantastic creatures abound, it is bound to be a matter of time before the humanoid races find a way to standardize and specialize in their hunt and consumption. Skaalhaft, as such, is a window into an all-too-often neglected component of fantasy games and adds serious depth to the game – particularly if you enjoy Playground Adventures’ amazing Creature Components-book (which makes components taken from critters really matter). In short: This is a great, inspiring little pdf, well worth 5 stars + seal of approval.

You can get the Creature Components book here on OBS!