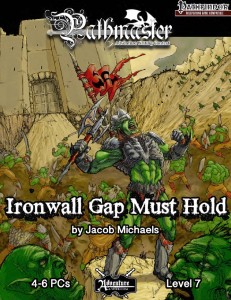 This module is 40 pages long, 1 page front cover, 3 pages of advertisement, 1 page editorial, 1 page ToC, 1 page back cover, leaving us with 33 pages of content, so let’s take a look, shall we?

All right, still here? The adventure starts innocently enough – the player characters stumble across some soldiers in the process of being killed by Perytons. Saving the hapless guys, they are recipients of dire news – Ironwall Gap, a fortress blocking a pass in the north with its massive 30-foot iron wall, is under siege. For the first time since ages, the orcs have spilled forth and seek to wreck the fortress. The PCs, hopefully also trying to prevent a flood of marauding orcs, set off towards Ironwall Gap.

Upon arrival at the rather complex and detailed fortress, though, things look even more grim than anticipated: – in the wake of the just discovered deaths of the senior officers (fallen to an assassination by the orcs), the men are quarrelling who’s in charge: Just short of coming to blows, the local garrison and the roving cavaliers need to have their dispute settled – fast, for the war drums are pounding.

Whether the PCs take charge or weigh in favor of one commander, the results will have an impact on the fighting prowess of the defenders….and then the first battle is upon the PCs. While thankfully, the orcs expect an easy picking, the PCs and garrison will still be pressed by this first massive encounter. Speaking of mass: Yes, this module is in line with Adventureaweek.com’s tradition of innovation: “Ironwall Gap must hold” is to my knowledge the first module by a 3pp to support the mass combat rules from Ultimate Campaign! Two thumbs up for that!

Now after initially repelling the orcs, the PCs will have a truly commendable sandbox at their disposal – whether by improving doors via adamantine nails, uncovering the truth of why an officer was absent from the assassination attempt – but handling the affair publicly may prove to be rather damaging to morale – hopefully, the PCs are tactful. Have I mentioned the fresh haunt that now makes access to the war room problematic? The PCs have some time to fix issues, get accustomed to the fortress – but not too long: Sooner or later, the orc horde will be upon the defenders – who are severely outclassed. Repelling the initial assault, the siege is on.

The warleader of the orcs asks for immediate parlay, citing “doom coming” from the north as reason for the attack and acknowledging being responsible for the deaths of the commanding officers via a Ghostwalker assassin. Likely, the offer to just flee will be no option for the PCs and thus, parlay for now is over and the brutal siege begins in earnest: Ghostwalker Targg will continue his attempts at sabotage and assassination, orc sappers will try to enter the fortress via summoned thoqqas burying tunnels for army ant swarms. Worse, on day 3, the leader of the cavalry snaps and decides to go out in a blaze of glory – hopefully, the PCs can talk him out of it – if not, their army will suffer even further…

And they’ll need any help they can get – the final encounter isn’t call “And the wall comes tumbling down…” for nothing: The flying orc witch mother Hagna attack alongside the colossal Throcka, a new creature that looks somewhat akin to a massive cross between an armadillo and a mammoth, with huge and deadly tusks, ignoring 10 points of hardness and crashing through…well, just about everything. Taking down this superior foe will prove to be the last straw to disperse the horde, but a monumental task to accomplish – worthy of the epic end of this module.

Editing and formatting are very good, I didn’t notice any glitches. Layout adheres to a unique, full-color 2-column standard with nice cartography and artwork. The pdf comes fully bookmarked and all maps also come in player-friendly PC-versions.

All right – this one’s simple: Hold the line. It does not require a complex storyline, smart enemy placing etc. – but it could have gotten monotonous. It doesn’t. Instead, “Ironwall Gap must hold” not only offers support for the Ultimate Campaign-rules, but also implements various consequences for the PC’s actions and breathes the flair of the “300”-movie without resorting to the movie’s plump othering of adversaries – in fact, the orcish warlord is rather honorable in his actions – as far as orcs in war go, that is.

Offering a thrilling ride, using mass combat rules and delivering a concise, cool scenario that is perfectly suited for its page-count, sans filler and without leaving me feeling it would have worked better in another format, this is a stellar example of adventure-design – author Jacob W. Michaels has created a true winner, one I can’t nitpick apart – Verdict for this excellent module breathing the spirit of desperate struggles versus overwhelming odds? 5 stars + seal of approval!

Want some warfare in your game? Get this module here on OBS!