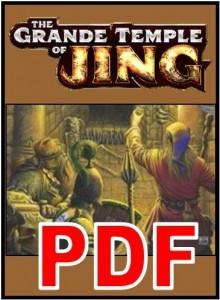 This player’s guide for the Grande Temple of Jing mega-adventure clocks in at 15 pages, 1 page front cover, 1 page SRD, leaving us with 13 pages of content, so let’s take a look!

The pdf begins with a brief explanation of what the Grande Temple of Jing is – a mega-adventure dungeoncrawl set in the temple of the eponymous trickster god Jing and information on what PCs know in-game about the dungeon and the god are provided, which is nice.

Unfortunately, pretty much from the get-go, there is a discrepancy between the writing and the rules-context – players are advised to bring along bandages, mundane items. Three variants of them are provided. The basic bandages do exactly nothing as per the rules – they are a fluff-only item…and they make the Heal-rules problematic: Can tehy be used to fill up a kit? No idea. Can they be used to treat caltrop-wounds? No idea. What’s the treatment action/does it require an AoO? The herbal bandages sport this gem: “Healing check while using them are at +2.” Okay, I’ll play: What’s the bonus type? Does it stack with other Heal-enhancing items? Things become more confused with magical bandages, which heal 2d4 hit points. Slapping them on is enough to make them work as per the wording, but I have literally no idea regarding whether they still require a Heal-check or not, whether applying one provokes an AoO, etc.

The pdf also introduced a new skill, Jingcraft, which is based on Wis (with an alternate Knowledge (Jing) based on Int) – okay, so for what classes is this a class skill? Research allows the skill to be “trained up to level 3″[sic!] outside the temple, with further ranking up requiring prolonged expeditions into the temple. If you have 3 ranks in the skill (not typical; the few synergies that exist pertain to feats like Skill Focus), you get a “+1 bonus to Survival (Dungeon) or Knowledge (Dungeon)-checks.”[sic!] Both of these skills DO NOT EXIST. Survival is a skill, but there is no Survival (Dungeon) and while there is a skill for knowledge pertaining dungeons, it’s called Knowledge (Dungeoneering). This is SLOPPY. Not even looking up base nomenclature? Really??

But what can the skill be used for? Well, it can be used to bruteforce riddles and use “Jing Enchanted Items” “as if you were using the skill Use Magic Device at the same level. This is a Wisdom check if you took Jingcraft and an Int check if you took Knowledge” AHHHRGHHH. Okay, let’s pick this apart, shall we? The wording is inconsistent, using Wisdom and the shorthand “Int” in the same sentence. Sloppy. Similarly, its omission of the knowledge subtype later renders that component broken. Oh yeah, skills have no “levels.” No idea how basic rules-language works. “Wisdom checks” or similar attribute-based checks mean that you roll 1d20 + attribute modifier. That’s literally d20-system rules language 101: It’s not complicated for %$&§%%&!”$$%&%!!!! ARGH. Yes, it is clear what this wants to do; but it formally fails in every way possible. And then there is the *biting sarcasm* “wonderful” innovation of introducing a nigh useless skill to use new items, one that does not specify the class skill designation. Great. Just great. /*biting sarcasm*

THANKFULLY, the 4 new races are not exercises in sloppiness like that. The pdf introduces basically a sasquatch-style race, the Chorak. With cold resistance 5, +1 natural armor and a Wis-based curse and death curse, they look feasible. Alas, looks can be deceiving. First of all, the most minor of issues pertains that all but one (which gains +2 to an ability score of their choice) races herein are lopsided – i.e. they gain +2 to two physical or mental attributes, which is something that gears the whole race towards a given type of profession. On the plus-side, we actually get age, height and weight tables and e.g. the Chorak increase their Strength when becoming older. Similarly, a membrane that helps when saving against dazzling lights and light-descriptor spells is solid. However, “When moving across ice and snow, chorak take no penalties if barefoot.” – okay, so do they ignore difficult terrain? No idea. Similarly, the curse fails to specify whether it’s Sp or Su and the actual DC to save against it. It’s Wisdom-based. Great. Does it scale with HD? 1/2 HD? Oh, the death curse of these guys affects the whole family of the slayer…so do these relatives get a save? The racial entry comes with two fluff-only items and two sample characters. Yes, the statblocks have errors.

The lizard-like amphibious Lazinar are less problematic, with slightly enhanced healing and solid necromancy-benefits and SPs…however, the devil’s in the details here as well: They can break off a tooth to increase the DC of “necromantic” spells (it’s necromancy) they cast by +2. Okay. Does this stack with other DC-enhancers? More importantly, does the tooth-breaking entail a concentration-check? Since it deals damage, it seems to. How many teeth do these guys have? How quickly do they regrow, if at all? No idea. The natural bite attack fails to specify whether it’s a primary or secondary bite attack and deviated from the usual size-based damage 1d6, but since it downgrades the damage to 1d3, I can live with that. We get 2 sample characters and age, height and weight tables here as well and a bit of fluffy culture – which oddly contradicts the race’s abilities – as amphibians, they’re hard-pressed to drown.

The badger-people Quoshi can Hold Breath, gain a bite (properly codified as 1d4 primary, though the damage type is wrong…) and…are OP as F***. When in rage, they gain flurry of blows at full character level. No, this is not a typo. They can also use Perform checks as substitutions for Will-saves to “avoid uncontrollable rages (detailed above)” – problem is…the respective information is at the bottom of the next page, not above. Nasty layout snafu. So what’s that about? Well, these guys can enter a 1-minute-increment-based rage for up to 2 times level MINUS Wis-mod (minimum 1, negative modifier is used as positive modifier) minutes per day, which grants +1 to atk and damage. However, they must succeed an escalating Will-save to actually end this state and run the risk of attacking nearby allies. Imho, the formula is needlessly complicated, but oh well. The Quoshi barbarians also extend this rage’s drawbacks to their class’s rage. Speaking of which – does the racial rage stack with other rage-effects? Is it Ex or Su? I assume Ex. There are also items to enhance the burrow speed of the race and one that grants claw attacks – which is annoying, because the item fails to properly draw a distinction between “claws” as the things creatures have and “claw attacks”, which is a type of natural weapon, when clearly, the item is intended to modify unarmed strikes. The penalty/feat-interaction becomes a huge cluster-F***. Again, the tables and sample characters are provided.

The third race would be the winnow, who do not decrease Dexterity when aging, instead increasing it. Winnow with a Dex-mod of 11+ also gain utterly OP SPs at 1st level: 3/day blur, 1/day burst of speed and haste. Oddly, they are governed by Charisma, deviating from the Dex-prereq. To use them, the winnow must make a Dex-check versus 10+spell level + armor check penalty or take 2 points of Con-damage, which heals after 8 hours (and thus needs to be tracked separately…*sigh*) and failure to activate it makes it impossible to use the ability for 1 round…but does it expend the daily use? No idea. Additionally, they can Con-mod times per day expend a swift action to get a move action, though failed uses of the SPs mentioned above eliminate one use of this ability – so do they draw from the same pool? I assume no, but overall, this is an action-economy mess waiting to happen.

On the plus-side, the mundane suit provided gets the bonus type right and information on eating habits and famous winnow are nice. As before, we get sample characters.

The pdf closes with 4 extensive and well-written legends on famous treasures inside the temple and here, the pdf shines a bit – the fluff is great, the advice given solid, if generic and the sample rumors are nice. The excerpt from the canticles of Jing was neat indeed.

Conclusion:
Editing and formatting are solid on a formal level, horrible on a rules-language level: Were I to list every deviation from racial formatting as established in the ARG, we’d be here next week. Layout adheres to a pretty printer-friendly two-column b/w-standard with several beautiful full-color artworks. Alas, the neat artworks for the races are pixelated at the borders. The pdf has no bookmarks, which is a comfort detriment.

Danny O’Neill’s player’s guide to the Grande Temple of Jing has two sides to it: For one, and I’d like to emphasize that, the fluff is evocative and nice – the pdf also does not spoil anything of relevance. It really is not badly written. The pdf also seems to partially be aware of rules-conventions like bonus types etc. – only, and here’s the issue, to then forget about them. This looks like a homebrew player-handout, where “things can be answered by asking the GM.” There’s no two ways around it, the races herein are anything but balanced, even among themselves. They use over-complicated mechanics. The items actually CREATE rules-issues where previously none existed. The rules-language is horribly inconsistent and shows the utter lack of an editor familiar with the finer details of PFRPG’s language (Or that of other d20-based games, really!). This pdf *looks* like it works at first glance and then the issues start showing in the cracks and crevices of syntax and semantics. And no, before you ask: There are no alternate racial traits, no new race traits and no favored class options herein.

Beyond OP races that sport some truly evocative ideas, the pdf fails pretty much in 80% – 90% of cases where any precision regarding rules-language is required. On OBS, this is tagged as system-agnostic (which is WRONG!) – but I certainly wished it were system-agnostic, for the ideas themselves aren’t bad – only their execution is pretty much an unmitigated mess. While I’d really like to be more lenient, I ultimately can’t be – my final verdict will clock in at 1.5 stars, rounded down to 1. Skip this mess of a player’s guide.

You can get this, if you’re feeling like you need some punishment, here on OBS!