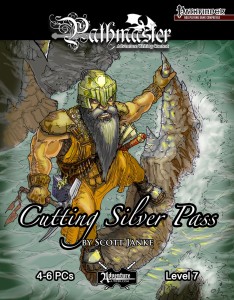 This module is 37 pages long, 1 page front cover, 1 page editorial, 1 page ToC, 3 pages of advertisement, 1 page back cover and 1 page SRD, leaving us with 29 pages of content, so let’s take a look!

All right, still here? The town of Imarlap is blessed by abundant silver, but also is quite far off the trodden paths, requiring expensive magic to properly get the goods to civilization. All that changed when the local dwarven wizard miscast a spell and stumbled across a huge cavern complex – a plan thus formed to cut a pass through the mountains and deliver the silver via these caverns and the rivers coursing through them. Unfortunately, the wizard was secretive and neither he, nor his apprentice have been seen for more than a month – enter the PCs!

Hired by the town’s silver barons, the PCs will first have to find the missing wizard’s hidden tower – by piecing together evidence from survivors of a mining accident – all of which could be more cooperative. Navigating the mining tunnels, the PCs find the tower and means of access and have to acknowledge that the dwarf’s paranoia was well-founded: Assassinated by his apprentice, he now is a specter and one first obstacle on the PC’s way. And with his plans, the true meat of the adventure begins: Developing Silver Pass. Yes, you heard me right -via crews and engineering, the PCs will have the task of developing a pass – with all the consequences that entails:

From realizing how and what areas to develop to exterminating puddings and similar dangerous vermin to dealing with raiding xorns, trolls and negotiating with the were-bear cave druid (who unfortunately stands in the way of progress – a nice moral dilemma) to the Stoneraven Giant Tribe, which may be more than the PCs can handle via brute force. Speaking of brute force: A local Silver Dragon, Scrilmeiis, may also challenge PCs for honorable fights and, when treated fairly, might make for a great champion for the exploited miners and political counter-weight to the silver barons – if the PCs can win him over via chivalrous conduct and smart thinking. As a final challenge, the PCs can deal with the Whitewater Orc Tribe – probably by navigating canoes down the rapids and fighting off the green-skins in a truly cool and iconic mini-game style encounter that actually comes with a table that makes running it rather easy..

We also get all the maps in player-friendly versions.

Editing and formatting are very good, I didn’t notice any significant glitches. Layout adheres to a beautiful, original 2-column standard and is one of my favorites among the unique styles used for Pathmaster-modules. The pdf comes fully bookmarked for your convenience and the cartography is neat, as we’ve come to expect from AaW.

All right, let’s get one thing out of the way right now – Scott Janke has created a UNIQUE module here – there are not that many “Developing” modules available – beyond Kingmaker and “Conquest of Bloodsworn Vale” and some of AaW’s offerings (Like “Forest for the Trees”), there simply aren’t enough modules out there that breathe the spirit of conquering/exploring/developing the wilderness and this is one: Suffused by the spirit of frontiersmen, of can-do, of bringing civilization, this sandbox offers ways for PCs to actually influence a settlement, of doing something significant and while it works well in its context, it left me hungering for more – I’d be all game for a Fitzcarraldo-style AP or any further expansions and similar modules – this offering feels that fresh, that new, that uncommon – marrying details and believable, at times tragic characters with the unconventional premise, we have a great module on our hands – final verdict? 5 stars +seal of approval!

Do something constructive and embark on a unique adventure – and cut the pass – here on OBS!