Pathmaster: To Walk the Dark Road 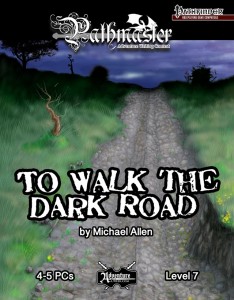 Still here? All right! Right from the get-go, we see an adventure timeline as part of the ToC  -and for good reason, but more on that later. Once, the power of a significant order of druids came from an island, more precisely from the so-called “Tear of the Mother”. Capturing one druid (called Brathadair) of significant stature whom he tortured to lead him there, warlord Sueton Paal led a vile campaign versus the druid’s wilderness home, now known as the lost lands. Disgusted by the brutality of the massacres he started, the gods made the fallen rise as undead, though the lost lands never recovered from the tragedy. Now the PCs are hired and get a grisly item – (the kidnapper’s bane, crafted from the eyeball of Brathadair), which will meld with the ye of a PC to provide a guide. And yes, this procedure is as disturbing as it sounds…

And then, we start off on an OVERLAND TREK adventure – the eyeball pointing the PCs towards other parts of the dismembered Brathadair, allowing them to retrace their steps throughout the cursed lands ravaged by war and now home to deadly threats. Worse, an animated ream will haunt the PCs, filling their dreams with dreadful nightmares as they trace the steps of the campaign and follow in the footsteps of the vile campaign of Sueton Paal, gathering the grisly, preserved remnants of Brathadair. Braving their own fears, redcaps, ice trolls and similar threats (with glorious maps), the PCs collect these macabre remnants and assemble a way to lead them to the island long lost to the world.

At the beach of the island, a lavishly-illustrated chaos beast, as well as a confrontation with a deathweb and allips (again, with a rather cool artwork) as well as the remnants of the walking dead left by the massacre to finally find a way to end the darkened haze that suffuses the lands by surviving a night-long vigil and defeating the dreams, thus ending the torment of Brathadair, turning his remains into no less than 3 unique magical items.

Editing and formatting are very good, though I did notice a couple of minor glitches here and there. Layout adheres to a beautiful 2-column full-color standard and the full color artworks provided are drop-dead-gorgeous, as are the 5 (3 pages) maps for encounters. The pdf comes fully bookmarked for your convenience.

This is perhaps the most risky of the pitches that made the transition to module: First of all would be the genre of overland travel, which is often extremely railroady. The module offsets this via a smart set-up and iconic imagery – essentially, the PCs are not only progressing towards their goal, they are also diving deeper into the past, slowly unearthing the background story of the module and delving deeper into the dream-like logic behind the journey. That being said, there also are some minor things I can complain about: While this module can be read of as a journey into a nightmare, it sometimes could have used a closer tie to the dream-like, unreal atmosphere of the journey – using surreal symbolism and providing some random encounter-tables to spice up the journey could have made this legendary indeed.

The cursed nature of the lands, the nightmare-aspects of the PC’s nights remains a tad bit too subdued, a bit too lucid for my tastes. While advice on generating paranoia and mystery are plenty As written, the overland journey remains interesting and is to be applauded in its handling of one of the most difficult genres of adventure writing, but slightly falls short of its vast narrative potential. Blurring the lines between reality and dream could have further enriched the already cool, terrain-rich (also in the repercussions for combat!) and iconic encounters the PCs face throughout this module.

When all is said and done “To Walk the Dark Road” turned out to be a well-crafted, atmospheric dark fantasy module with some macabre imagery that provides some spotlight for the often neglected genre of overland travels. Not realizing its full potential may seem like a pity, but it ultimately does not cripple the module, offering still ways for enterprising DMs to enhance it. When all is said and done, I consider it a good module on the brink of greatness and hence my verdict will clock in at 4.5 stars, rounded down to 4 for the purpose of this platform.

You can get this delightfully macabre module here on OBS!