EZG reviews The Order of the Black Earth

The Order of the Black Earth 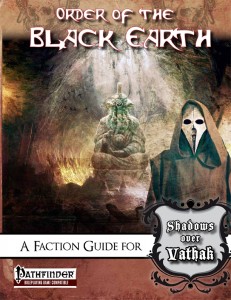 The first player faction-offering for the Vathak-setting is 13 pages long, 1 page front cover, 1 page editorial, 1 page SRD, leaving us with 10 pages of content, so let’s take a look!

Player faction? Well, yes, for this is more than an organization – devoted to the Book of Black Earth, an ancient tome of cataclysmic prophecies unearthed from ruins led to genesis of a secret organization – on available for PCs, though personally, I’D rather suggest this ephemeral cabal more as antagonists. But more on that later:

Drawing in a cool professional way on how factions in Golarion are presented, we get the basic faction rules regarding prestige explained to us before we delve into the order’s history and rather disturbing indoctrination rituals. A long and concise list of benefits depending on TPA and CPA (total and current prestige awards) are there and offer some intriguing options – amongst other to exchange character traits for the two new faction-specific traits provided in the pdf – both of which come with a nice fluff and mechanics I can’t and won’t complain about. Suggested classes and 4 new feats are also part of what the order has to offer – including one that allows the user to 3/day cast the message spell as a spell-like ability, but only t contact other order members – a powerful tool for shadowy conspiracies indeed. The feats are solid in presentation and while spells are not in italics, the fluff and ideas make up for this minor shortcoming by oozing flair.

2 new spells also complement this faction, one that deals damage and infects with a  more powerful type of Borer Worm (a CR 1 acid-oozing parasite-worm introduced in these pages as well) and a spell that conjures up an area of writhing, shadowy, con-draining tentacles. Aforementioned Borer Worms are also provided equipment style stats and we get one damn cool poison: By extracting tainted earth from the dread pit of decay (a mobile, gory, maw-like appendage that shows itself annualy and is tied to the Old One of the cult), the order may create a potent toxin by mixing the soiled earth with blood. This location is not the only special one sacred to the order – there are also the Worm Ways, hidden and weird tunnels that serve as twisted smuggle-ways. A special celebration, a holiday if you will, the so-called Worm-Solstice is provided as well in a compelling, twisted write-up.

Among the creatures, apart from the Borer Worm, we also get the Crawling putrescence and a sample CR 8 mastermind of the cult.

Editing and formatting are very good – apart from some minor aesthetic glitches like aforementioned italics-bungle I didn’t notice any glitch that would have impeded my enjoyment of this pdf. The layout adheres to Vathak’s beautiful 2-column standard and the artworks are nice indeed, especially for such an inexpensive publication. On the downside, we don’t get any bookmarks, which is a minor bummer.

Wow! Kudos to the Fat Goblins! This pdf for the Vathak setting is not only a great cult for the setting, but for any setting really – DMs seeking to flesh out the Age of Worms or those using Morithal (from Clockwork Gnome Publishing’s excellent pdf) should definitely get this as a means to further flesh out the cults. The prestige benefits and iconic locales and rites add further flair to a presentation of a thoroughly twisted cabal that should strike a chord with all DMs that like their fantasy dark and twisted. An enjoyable read for a fair price indeed and well worth 5 stars – me omitting my seal of approval only because of the minor glitches and lack of bookmarks.

You can get this cool cult/faction here on OBS and here on d20pfsrd.com’s shop!