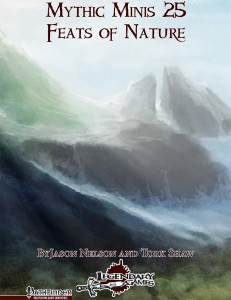 This Mythic Mini provides 10 new mythic feats, roghly grouped around the theme of nature, so what do we get?

-Eldritch Claws: Bypass mythic tier DR with natural weapons; Expend mythic power to attune your natural weapons to a type of DR and ignore it for a short duration. Nice one!

-Greater Wild Empathy: Use Wild Empathy with bonus in lieu of Diplomacy and Intimidate when interacting with appropriate creatures; Can be enhanced by mythic power. Kind of…boring.

-Mystic Stride: Autofail for plants to grapple you/entangle you. Use mythic power to teleport through plants. Not a fan of autosucceeds. Why not deliver a massive bonus instead? Mythic Tier or Mythic Tier x 2 to CMD?

-Quick Wild Shape: Faster wildshape, via mythic power even as an immediate action.

-Vermin Heart: Vermin have a starting attitude of friendly, be unarmed (or even take highjack via mythic power) controlled or summoned vermin via wild empathy. Neat.

-Wild Speech: Use mythic power to eschew somatic or material components when casting in wildshaped form and also increase DC for language-dependant spells on creatures of the same form; Also gain speak with animals of your shaped form at will. Okay, if a bit unfocused – the mythic power effect looks more like a poor man’s natural spell – and as a casting shifter, that one is still probably a must have…

Editing and formatting are very good, I didn’t notice significant glitches, only e.g. “Speec” instead of “Speech” once. Layout adheres to legendary Games 2-column full-color standard and the cover-art is neat. The pdf has no bookmarks, but needs none at this length.

Jason Nelson and Tork Shaw deliver a nice array of mythic feats in here – Feral Combat Training (mythic) is a godsend indeed for many a build, and overall, the content is solid. that being said, the rest of the feats didn’t exactly blow me away and while the utilize some nice mechanics and ideas, they do feel slightly less polished here and there. Auto-succeeds? Really? This is by no means a bad installment, but I didn’t blow my socks of and is slightly rougher round the edges than other mythic minis. My final verdict will clock in at 3.5 stars, rounded down to 3 – a solid pdf, but one whose feats mostly failed to feel mythic to me.

You can get this inexpensive pdf here on OBS and here on d20pfsrd.com’s shop.