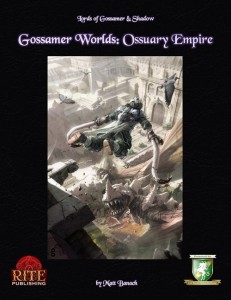 This installment of the Gossamer Worlds-series clocks in at 12 pages, 1 page front cover, 1 page editorial, leaving us with 10 pages of content, so let’s take a look!

Now the eidolon is often considered to be the safer side of forces in LoGaS – this is an example why that is a gross and inaccurate reduction. Thematically based roughly around ancient quasi-Persian myths in style, once this place was ruled by the dîv – manifestations of eidolon that subsumed all in perfect order, only to wage war upon one another in the end. Oh, and the final two standing were nuked with a neutron bomb.

In this world wracked by deicides, the bones of the dîv as powerful artifacts (who get their own rules!) now act as a type of much-clamored for relic to access the vast power lost – essentially, we have a post-apocalyptic sword & sorcery world here with conan-level technology interspersed with potential super science from other worlds. Worse, much like the behiliths from the legendary Berserk-manga, the div-bones tend to change the creatures they come into contact with, adding the mythic nephilim to the roster – self-styled children of the gods and heirs apparent to the thrones of the erstwhile masters…who cares if the nephilim is a vast serpentine monstrosity? It has power! Add to that the Diamond Padisha and yes, the legendary league of assassins and we have a great blend of arabian nights, sword & sorcery and post-apocalyptic survival on a tomb planet. Yeah. AWESOME.

That being said, a general idea for the power-level of individual Nephilim (two of which are btw. rendered in gorgeous full-color artworks…) would have been much appreciated by yours truly.

Editing and formatting are top-notch, I didn’t notice any glitches. Layout adheres to Rite Publishing’s full-color two-column standard for LoGaS-supplements and the pdf comes with glorious, thematically fitting original pieces of artwork, with the awesome cover also coming as a glorious full-page artwork herein. The pdf comes excessively bookmarked, which is nice to see, even at such a short length!

Matt Banach’s Ossuary Empire is one AWESOME world…and honestly one I’d love to play a whole campaign in – the grit, super technology, uncommon focus, sword & sorcery stale – all appeal to me excessively and make for one awesome world. However, the general lack of information on what the nephilim can be expected to do feels like a somewhat unnecessary oversight to me. While only a nitpick, this omission is the one thing that keeps me from slapping my seal of approval on this. My final verdict will hence clock in at 5 stars.

(Now can I please have this one redone as a full-blown 200+pages campaign setting for either LoGaS, DCC or PFRPG? Please?)

You can get this inspiring supplement here on OBS and here on d20pfsrd.com’s shop.