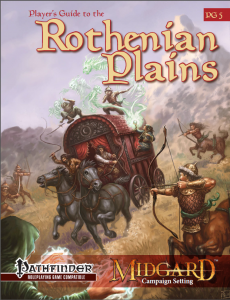 The latest installment of Player’s Guides for the Midgard campaign setting is 31 pages long, 1 page front cover, 1 page editorial/ToC, 1 page advertisement 2/3 of a page SRD, leaving us with  27 1/3 pages of content, so let’s take a look, shall we?

As has become the tradition with the series, we kick off this installment with a short fluffy introduction on the Rothenian Plane and after that, we get the racial qualities of Centaurs – Centaurs get +2 Str, Wis and Con, – 2 Wis, are large, have a movement-rate of 40 ft., darkvision 60 ft., get Run as a bonus feat and are treated as having mounted combat for purposes of feat-prerequisites, get +2 to ride (???) and attacks while charging as well as Heal Heal and Craft (Bows) and as quadrupeds, they get +4 to CMD versus Trip, but also -4 to stealth. Centaurs may also choose from 6 alternate racial traits – from eating anything to faster speed, poison use or increased encumbrance (I assume in addition to the already impressive quadruped encumbrance-bonus), centaurs may also replaced their skilled trait with alternate skill-bonuses while in the Rothenian Plane. If you’re going for playing centaurs, I guess they kind of work, though I do consider them rather strong stat-wise – one particular issue centaurs will face would be the climb-issue and similar problems whenever feet would be required and their bulk a hindrance. So honestly…a sample DC-table/advice for this particular race would have been rather justified, especially since per design, they seem to imply that this is a balancing factor…. or the designer just didn’t balance them with the core-races: Since they don’t use undersized weapons like lamias, the large weaponry alone is quite a bonus…

The second race herein would be the Huginn, the Ravenfolk of Midgard, who get +2 Dex and Wis, – 2  Con, low-light vision, +2 to Stealth and Perception, +4 to linguistics, automatic proficiency with short swords, greatswords and longswords as well as a bite attack at 1d3. They may also choose from a total of 4 alternate racial traits, all of which are nice and balanced, including Wotan-blessed milky-white eyes that impede ranged combat, but mean they are closer to the flow of destiny, allowing them to 1/day add +1 to an attack or check.

The Human ethnicity of the Kariv is also depicted – Kariv replace the default human traits with one or more of 5 different traits, many of which add 1/2 class level to a respective skill: Rather powerful and definitely something, as the header suggests, that should be subject to DM approval. The Khazzaki Nomads may also choose from alternate traits that emphasize their alliance with elves and centaurs or their opposition to dread Baba Yaga or the Lord of Demon Mountain. Finally, Elves may belong to the ethnicity of Windrunenr elves, choosing from a total of 4 racial traits. We also get 26 new traits, all of which are neat, but also nothing too particularly exciting – plus, I noticed a minor glitch, a lack of italicization of a spell herein. Oh yes, all of the races lack age, height & weight-tables, which would have been particularly interesting for Centaurs & Huginn.

Among the 6 new feats, 4 are archery-themed, pinning crited foes or allowing you to incur penalties to add bleed and dex-damage and at level 20, even death (thankfully all with saves) to your shots. The other two feats allow you to unseat multiple foes – all in all, an awesome little feat-section that offers some cool options. Two thumbs up for that category!

Hereafter, we are introduced to Rothenian Archetypes – starting off with the Centaur Cloud-render, who becomes subsequently more immune to detrimental conditions and rather powerful high level abilities in the final spectrum, including increased Str- and Con-bonuses and +2 enhanced threat-ranges and auto-confirms as a capstone. All this mostly in exchange for trap sense, uncanny dodge and indomitable will. Solid if not particularly exciting archetype, though one ability has its name not properly bolded. The Second Centaur-archetype would be the Earth Mother (a druid archetype), who gains detect poison and know direction at will in exchange for woodland stride as well as speak with-spells as abilities etc. – okay druid-archetype, but kind of lacks a true selling point for me. The Holy Spear would then be a centaur paladin – these paladins don’t get spells, but instead more lay on hands and mercies and they also get a groom instead of a mount – essentially a human (or elven, or gnomish…though gnomish squires are rather…problematic in Midgard…) squire. At high levels, they may create circles of protection and dimensional lock adversaries. Now this one is rather cool! Speaking of cool – we also get the Sky-Father for the centaurs, an archetype for Marc Radle’s much-lauded spontaneous casting shaman-class: This one being particularly resilient and a foe of unnatural supernatural beings (i.e. not necessarily fey). oh yes, and they can MAKE SWORDS OF LIGHTNING. This, ladies and gentlemen, is a worthy archetype!

Khazzaki Husars are a subset of fighters that specialize on fighting while in the saddle and under the stars of the Rothenian plains – utterly bland and boring in contrast to e.g. the Shrive. What’s that? The hermaphroditic Shrive oracles of the Kariv may discern lies by partaking in one’s blood and they also may discern the hidden or let targets swear blood oaths – mechanically not too intriguing, but the stellar fluff makes this archetype awesome.

Sorcerors of the Huginn may now opt to choose the new Stormraven bloodline, which allows them to store spells in their weapons and sacrifice illusion spells to increase their disguises. We also get  10 new hexes, many of which cripple quite profoundly those coming too near to the rothenian witch – powerful, yes, but also very distinct. 2 major hexes and 6 grand hexes are also included in the pdf – the latter including storms of vengeance and even clone-like doppelgänger.

We also get the new lightning and sky subdomains, 3 divine spells and 5 new arcane spells -one of which calls the legendary Black Gnash, a particularly famous nessian warhound… 8 new magical items, 4 types of magical weapons as well as 5 mundane weapon types and 8 pieces of gear and equipment are ready to be bought via your PC’s hard-earned gold. The pdf closes with the stats for 4 different mounts that include fey hounds and spirit horses, but strangely lack the stats to be used as animal companions – particularly weird in a Player’s Guide.

Editing and formatting are good, though not perfect – I noticed no truly outstanding glitches, but there are some minor ones interspersed throughout the pdf. Layout adheres to Kobold Press’ glorious 2-column full-color standard and the pdf’s artwork ranges from fitting stock to awesome original full-color. The pdf comes fully bookmarked for your convenience.

Author Adam W. Roy has talent, as he’s shown in some installment5s of the series, but this particular one is not his best take – there is nothing particularly broken herein, but there indeed is quite a bunch of filler material that simply could have used a tad more unique options – some archetype are simply not that compelling, the traits don’t live up to their name or could (in the Kariv’s case) be considered rather strong. The Shrive’s exceedingly awesome concept also asks for a better array of exclusive tools. What’s imho the worst, though, is that the pdf is extremely focused on centaurs – the other races & ethnicities are more or less glanced at. Which would not be that bad, would not all races herein lack age, height and weight tables AND would the pdf not fail to address the problems adventuring centaurs will inevitably face – whether by ladders or simple tunnel-size. Some magical items or abilities to deal with that or advice for players and DMs would have been very much justified in this particular case.

All in all, the Midgard Player’s Guide to the Rothenian Plains left me neither blown away, nor disillusioned – it remains a solid selection of crunch with some neat Midgard fluff strewn in, but also falls short of making for a truly excellent Player’s Guide since it fails to modify the formula of the series to the unique challenges the material herein poses – not only via the Centaurs, but also via the human ethnicities: Where are the Status-rating-modifications for example? Crab-Divination? Perhaps exiled Kariv divining via the dread spiders? A tad more balance between the racial material would have gone a long way here. My final verdict, taking these into account as well as e.g. the age, height, weight etc. absence, minor glitches etc. will clock in at 3 stars.