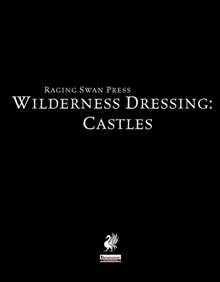 This installment of the Wilderness Dressing-series is 14 pages long, 1 page front cover, 1 page advertisement, 1 page editorial/ToC, 1 page SRD and 1 page back cover, leaving us with 9 pages of content, so let’s take a look, shall we?

Soooo. Castles – while a general first idea would liken them to fortified bastions breathing medieval air, the truth is that this término ombrellone contains more than fairy-tale castles, but also smaller fortified manors, chapels with living spaces and similar structures – hence the first table of small castles, with a total of 50 entries depicting a wide variety of them, even including lighthouses, star-shaped fortresses emblazoned with tiger and dragon carvings.

The second table of the pdf is 50 entries strong as well, containing castles with buildings interlocking like a puzzle, ones featuring giant domes and even inconspicuous castles that masquerade as ruins – the rubble is essentially just acting as a coat for the true castle. Now that’s an interesting idea!

Of course, that’s not all – beyond the general appearance/layout of the castle in question, we get a table sporting 100 entries to act as dressings for the castles – and they are truly imaginative: From all building sporting glass roofs to patrolling wildcats, fist-sized gems littering the courtyard and weird shrieks, we have quite an array of options available at our beck and call here. Have I mentioned the massive chandelier suspended in air? Sandy gardens with palm trees that clash with the climate? Once again, this table delivers imaginative, intriguing, inspiring concepts galore.

Beyond these, we also get a table of 100 sample names for castles – from Chateau Miserable (which, the language pedant in me notes, should be Château Misérable…) to Canderburne or Solace-in-turmoil – all in all, a solid selection of imaginative names, though I can’t get over the missing accent circonflexe in every instance of the word “Château” – and yes, I’m aware that the word has been anglicized, but in combination with “misérable” (which of course might be referring to the regular English adjective), the French version just feel more “right” to me – try to say it out loud if you don’t believe me. But again, that is just me being anal-retentive and should not be seen as a detriment to the product’s quality.

The final page of this supplement contains 12 different hooks and complications – including mysteriously empty castles, traitorous garrison-members etc. and a final list provides 20 names of the respective lords of the castle (as well as information on race, gender and class).

Editing and formatting, as I’ve come to expect from Raging Swan Press, is top-notch. I didn’t notice any glitches. Layout adheres to RSP’s elegant 2-column b/w-standard and the pdf comes in two versions, one optimized for screen-use and one to be printed out. Both come fully bookmarked for your convenience.

Eric Hindley has a terribly difficult legacy with this product – Mike Welham’s installment on “Primal Forests” was simply awesome in every conceivable way. That being said, I went into this pdf with lowered expectations. I shouldn’t have. Eric Hindley delivers intriguing 1-sentence hooks that ignite the imagination of the reader with vivid prose breathing at times the spirit of the fantastic or fairy-tales, while in other instances providing down-to-earth grounded “realistic” hooks – this pdf is more than a welcome addition to the series and manages to keep up the superb level of quality I’ve come to expect from Wilderness Dressings. Final verdict? 5 stars + seal of approval! Congratulations!