Flotsam of the River Realms 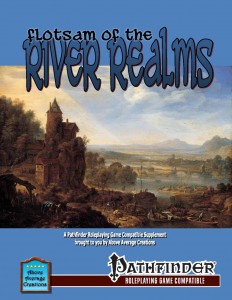 We kick this off with an alchemist archetype, the Clock-borne:  These alchemist replace mutagens with 1 minute per class level 20% blur-like miss chance by creating two duplicates. These duplicates also can be used in different ways at higher levels – whether by using an illusion of calm, immunity to flanking and splitting melee attacks between two targets as per mirror strike. At 6th level, the archetype gets a twisted, powerful ability – 1/day, for int-mod rounds, s/he can make a foe s/he touched AUTOMATICALLY FAIL ALL ATTACKS, instead hitting an adjacent square.  AT 14th level, the miss chance is even increased to 50% and becomes 1 hour per class level. Which is hilariously overpowered. Seriously. Miss chances are POWERFUL and poison use as well as mutagens might be useful, but don’t come out as equal when compared to a supernatural, undispellable miss-chance that can be maintained that long – even before the broken touch attack. No way I’d allow this archetype.

The second archetype would be the Libertine inquisitor, who gets a slightly modified skill list and a rather weird ability – spurious gaze allows as a move action an inquisitor whose cha is higher than the target’s wis to treat any creature as helping flanking. They also are cloaked by undetectable alignment, 1/week use envious urge, use foes as living shields: Class level rounds per day, incurred melee or ranged damage is split equally between the inquisitor and adjacent enemies – no save, no CMB vs. CMD, no attack, swift action to activate – utterly broken. Worse, later, as an immediate action, libertines may force opponents cha-mod times per day to make a will-save or have their attacks redirected – WHAT??? And again, as a supernatural ability? No way. At 17th level, they may even redirect spells not cast defensively. Again, an mho completely overpowered, bad archetype.

The third archetype is River Gypsy, once again with a modified skill-list. River Gypsies store their spells not in a familiar, but in an arcane fetish. River Gypsies must take either Tough as Nails, Rumors and Readings or Beguiling Entertainer as first level hex and at 10th level, she may curse casters to incur minor spellblights – which is rather cool! What’s not so cool is that it’s called a hex in the text, but shows up as its own ability – so which is it? Regarding the aforementioned arcane fetish, 5 items can be chosen – crystal ball, scrying bowl, rune stones, harrow deck, tambourine and scarves. Nice and surely a cool archetype for Varisians/gypsy-like cultures.

Next up is the new Craft (luck charms)-skill, which unfortunately remains  a one-dip-skill that lacks any incentive to invest more than a bare minimum of skill ranks. Worse, it fails to specify to what rolls the luck bonus/penalty the charms net applies, rendering this completely useless.

We also get two new magical items – first the brooch of false opportunity, which as a swift action can make a target make an AoO which automatically misses. Since it’s essentially an extended feint, it should follow those rules, NOT the opposed bluff-checks-3.5-remnant the item mentions. The cap of innocuity makes foes prefer other targets to the wearer – which is nice, I guess.

After that, DMs get some food with white water rapids as CR 2 hazards – Using acrobatics or profession (sailor) and ref-saves to regain footing, the hazard is actually rather nice – though players will hate the option to lose items to the hazard.

The final page contains an awesome full color map (with grid) of a river barge – Seriously, the map is awesome! Kudos to cartographer/author Jerry Keyes – I didn’t notice it had been created with dundjinni – it’s that well-made!

Editing and formatting are good – while I didn’t notice any significant glitches, on the rules-editing side, this pdf has some issues imho. Layout adheres to a printer-friendly two-column b/w-standard and the pdf comes fully bookmarked for your convenience and sports useful hyperlinks to d20pfsrd.com.

Oh boy. Two of 3 archetypes are imho utterly and completely broken, the third being okay. Add to that one of two magic items using 3.5-rules instead of how pathfinder handles it and we have quite of a mess – which sucks – for the map and hazard are great. The player-content with the possible exception of the river gypsy, though, I wouldn’t allow anywhere near my table. This essentially means I consider half of the pdf flawed, the other half ranging from ok to good. Unfortunately, though, at least for me, that’s not enough – hence my final verdict will clock in at 2.5 stars, rounded down to 2 stars.

You can get this affordable selection of miscellanea here on OBS.