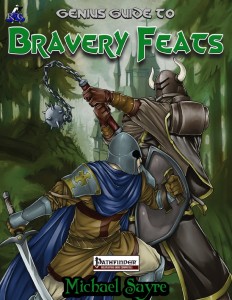 Bravery effing sucks. It’s a good idea, but in a class as relatively straightforward and boring as the fighter, it simply doesn’t do its job well. Hence, a LOT of archetypes trade it in, rendering the maintenance of the class feature a subpar option in many cases. Enter this pdf – all the feats herein do require this neglected class feature – but can they make bravery actually relevant? Okay, let’s take a look at Battlefield Commander – this one allows you, as a swift action, to share bravery with all allies in range of your voice for 3+ 1/2 class level rounds, adding one bravery feat to the things shared One can also see author Michael Sayre’s design for Dreamscarred Press in that the feat can be used 1/bravery feat, using a scaling mechanism similar to one that can be found in psionics.

Now no, not all of these feats boil down to tactician-ish options – fighters who have undaunted assault can smash foes to the ground, causing bleed damage and rendering the terrain difficult for the target to stand up from – damn cool imagery! What does undaunted assault do? Well, it allows you to take a penalty to AC equal to your bravery bonus and gain the same to melee attacks, also counting as having an Int of 13 and as Power Attack for prereq-purposes. Now this feat, quite unabashedly, wilders in expertse/power attack-terrain and usually, I’d be crying foul right now. However, the tie-in with class features makes for an interesting array of build-options, especially for low point-buy, gritty campaigns I *really* like. So yeah, powerful, but also damn cool and provides a slight edge re feat-economy for fighters.

Adding minor damage to bull rush/overruns while using undaunted assault (or an analogue bonus for grapples or for drag/repositions or dirty tricks) also makes for interesting choices – especially since e.g. max size-movable and similar small variables render the feats distinct beyond being just clones of one another – nice to see that the author went the extra mile! The feats also allow you to reduce the duration of fear-effects, enhance defenses versus disarms, power feints with bravery…pretty varied. What about adding bravery to item saves and hardness while you wear them? Adding bravery to demoralize effect-DCs as well? Adding bravery to skills can help the fighter excel in non-combat situations and then, there is eldritch parry.

When you or an adjacent creature is targeted by an instantaneous spell, spell-like ability or supernatural ability, you may, as an immediate action identify the ability (via Spellcraft/Knowledge) against 10+Cl or 10+HD (latter for supernatural abilities) – you cancel this out on a successful roll. The ability may be used once per day, +1 per bravery feat. Powerful, yes…but I really like it for fighters and being staggered for one round thereafter is a great pay-off! For once, they *CAN* do something against that caster/dragon’s breath/petrifying gaze. Using this ability for spell sunder-like tricks via a follow-up feat also should be considered nice! Counting as a fighter at -4 levels for the purpose of bravery…not a fan of that one, since it once again takes away from these unique options. EDIT: I probably should have mentioned that this option is pretty much for bravery-less fighters only, but still – it allows for a transparency I personally, in this instance, didn’t like.

Editing and formatting are very good, I noticed no significant glitches. Layout adheres to Rogue Genius Games’ printer-friendly 2-column full-color standard with solid full-color artworks, and the pdf comes fully bookmarked and hyperlinked for your convenience.

When I reviewed Michael Sayre’s Vizier, I became excited about the Akashic Mysteries-line. But is he a one-trick pony? Well, if the review was no indicator so far:

Bravery no longer sucks!! I can’t believe it! In fact, this pdf ranks among the best “Let’s make the fighter not suck so much”-books I’ve ever read. Each feat has some awesomeness going for it and sports concise, well-phrased rules-language, marrying that with awesome, evocative concepts. One good book is an incident, 2 are a trend. I adore this book, with my only gripe remaining that I don’t have more such feats at my finger-tips. So, when do we get book II? Seriously, I ADORE this little, humble pdf – while powerful, the feats ooze flair and went over REALLY well even in a 15-point-buy Conan-esque playtest sans PC-casters. In fact, while working great in standard fantasy, these feats work just as well in low/non-magic/gritty settings and campaigns, allowing for some of the truly iconic tricks versus the supernatural one always wanted fighters to sport. This book is NOT about damage-escalation, it’s about making martials more interesting by expansion in breadth, allowing for much more options and cool ways to excel and be relevant, even when not in combat.

This book is so good, I found myself often contemplating how Path of War would have ended up with Michael at the lead-design. These options are powerful, yet superbly balanced and have excited me beyond ANY feat-book I’ve read in the last couple of MONTHS. Yes, this inspired, this cool – final verdict: Must-have recommendation, 5 stars + seal of approval…and, because it is a VERY elegant system AND survived not only the regular, but also the extremely specific playtest scenarios superbly and made my players ask for more, I’ll also nominate it as a candidate for my Top ten of 2014. Fighters need to get this.

You can get this great little book here on OBS and here on d20pfsrd.com’s shop.