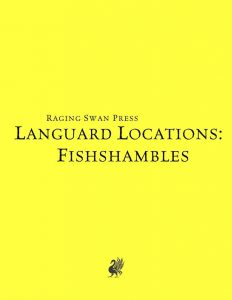 As in the previous installments, we have the respective key NPCs associated with locations within noted with alignment as well as suggested race/class combo and an inkling of the power they ought to have, but said NPC notes do not contain stats or the like. References to classes have been adjusted to reflect old-school terms – thiefs, magic-users and the like. So if you’re one of my readers who doesn’t want those new-fangled class names, this won’t annoy you. Each of the locations sports one or more different hooks for potential adventuring. Run aground slightly outside what is considered to be city proper, the Castoff’s Sanctuary sports folk with the haunted Gloamhold Look, watched over by father Uklo – this is the Castoff’s Sanctuary, and a selectively mute paladin and an ancient half-orc preacher tend to those traumatized and perhaps, broken. It s here that favors may earn even utterly coinless PCs some respite. Moss-covered and obscured by seaweed and shellfish, a wrinkled old mage with a penchant for the underwater world is peddling healing, narcotics and the like. (If you use B/X or Labyrinth Lord as your preferred gaming system, you may want to check out Necrotic Gnome Production’s Wizardzine #1 – I got a vibe from this fellow that would make the spells from said supplement a natural fit…but I digress.) Did I mention coral zombies?