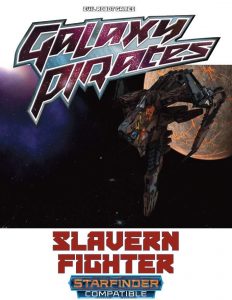 This installment of the ship-centric Galaxy Pirates-supplements clocks in at 15 pages, 1 page front cover, 1 page editorial/SRD, leaving us with 13 pages of content, so let’s take a look!

So, the first thing you need to aware of, is that there is not just a single ship inside – instead, we get no less than 6 different ships herein.

From the lowest tiers, we have two tier 1/4 ships, both of which are built on the racer frame. These two are very much similar, in that they are powered by micron light power cores, have cut-rate sensors, mk 3 armor, and mk 1 defenses. Shield-wise, they have basic 10, with 3 to the forward and aft, 2 to the sides, and T8 thrusters as well as crew-members that are obviously good pilots – +12; +5 Computers. Speaking of which – each of the ships herein does get its own table of 4 DCs for PCs that know about the ship – love those. As a minor, aesthetic complaint – the names presented in these tables don’t always correspond 100% to the name of the ship presented above – in the table, it’s the “Degenerate Slavern Gunfighter”, while the ship’s header calls it “Slavern Gun-fighter” – this doesn’t hamper the pdf, but it’s something worth mentioning.

The two lowest tier ships are differentiated from each other by weaponry – the regular (degenerate) slavern gun-fighter has a flak thrower on the front, while the other one features a gyrolaser as a forward-facing weapon, and a light laser cannon on the aft.

The battle-damaged slavern gun-fighter would be the third vessel using the racer chassis, though it clocks in at tier 1/3. It shares the T8 thrusters and the power core, but lacks mk 1 defenses. It does make up for the lack of defenses with better sensors (budget short-range) and a coilgun on the front, gyrolaser at the aft.

At tier ½, the regular slavern fighter uses the interceptor chassis, and upgrades shields to basic 20 with an even distribution; the ship sports mk4 armor and mk 3 defenses and budget short-range sensors + basic computers, with weaponry aiming forward – we have both a coilgun and a light torpedo launcher here. If you’ve been following with your math skills, you’ll also have realized that this loadout necessitates a better power core, and indeed, this fellow is powered by a micron heavy.

Now, pretty neat: We do learn a bit about the tactics employed by the slavern, who, as scavengers and raiders, feature a pretty badass gnoll-like picture that makes how the fighters are depicted make sense. The Turan homweworld, wrecked, has resulted in few of the old Turan vessels remaining – and exactly that is what we get to see from the final two fighters, which has not yet been worn down to typical slavern ship quality. (Nice hints of lore here!)

The Turan Fighter (missing an “n” in the ship-block’s header) is a tier 1 interceptor powered by a micron heavy power core, with T10 thrusters, basic 30 shields (slightly stronger forward and aft), and both mk 5 armor and defenses. With light plasma cannon and light torpedo launcher on the front, as well as medium-range sensors. The Turan ship feels different enough to represent the change in circumstances, also due to its loadoat behavior.

Finally, at tier 2, we have an ace custom fighter based on Turan design; while the weaponry is analogue to the regular one, we have T12 thrusters, basic 40 shields (evenly distributed), armor and defenses upgraded to mk 6, as well as advanced medium-range sensors, making this one much more likely to return – it feels like an ace-tweak of the ship. Each of the 6 ships featured within get not only their already filled in ship-sheets (awesome), we also receive the one page of paper-mini-like printouts.

Beyond the neat, expanded flavor and tactics notes that help contextualize the ships is supplemented by not one, but two one-page artworks of the fighters presented within – we get a massive artwork for the ship’s front AND its back, which is awesome. Coincidentally, there’s another way of using the artworks. With a bit of fantasy, one could think of both as different models. IT’s evident they’re part of the same ship, but it’s a nice alternate way of using the artworks.

Editing on a formal level is good – as noted, I observed some cosmetic hiccups. On a rules-language level, I found no glitches while reverse-engineering these ships – kudos! Layout adheres to the series’ printer-friendly two-column standard with full-color highlights; the ship-artworks are in gorgeous full-color, the other artwork’s in b/w. The pdf has no bookmarks, but needs none at this length.

Paul Fields and Jim Milligan provide quite an impressive amount of neat fighters here; they employ different builds and still feature specific motifs that are shared among them – considering that they don’t have a lot of wiggle-room, that is impressive. Oh, and guess what? This costs less than a buck! I’m not even kidding! Seriously, this is insane – and everyone can look past some purely cosmetic typos when the pdf has such an amazing bang-for-buck-ratio and art! My final verdict clocks in at 4.5 stars, rounded up, and this gets my seal of approval for its amazing bang-for-buck-ratio.

You can get these ships for a ridiculously low price point here on OBS!

Want the whole Galaxy Pirates-bundle? You can find it here!