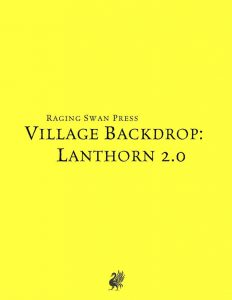 Lanthorn is a peculiar settlement – named for the magical lanterns set atop its gates, the perpetually-shrouded village is situated under a massive overhang in Kuldor Pass, where winters are long and cruel and summers but brief. Heavily defended and fortified, the settlement controls traffic through the pass and represents a gateway to the untamed wilderness beyond. Governed by a conclave of powerful wizards with an economy fueled by adventurers and fortune-seekers commissioning magic items, the village also is home to a thoroughly atypical tribe of matriarchal goblins, the Flaming Skull tribe, who also act as the village’s miners, digging strange and potent metals from the earth for their eldritch masters. This is where the new 2.0-version takes some additional material on board, mentioning a series of different sample individuals in Raging Swan Press’ classic fluff-centric write-up. It should be noted that this does include references to quite a bunch of specific magic items, as well as notes on hiring goblin hirelings. Fluffy write-ups of NPCs make use, where applicable, of the respective proper old-school names like magic-user etc.

The arcane conclave that is allied with the goblins and serves as a kind of magic-fueled upper class also has been expanded significantly, with sample NPCs noted and, even better, information for the respective membership levels provided. The behavior of law and order and customs, as well as the massive 20-entry dressing table add further value to the supplement. The flaming skull goblins have also found a pool of bubbling, highly volatile liquid deep within the mines, which helps against the ever-present threat of trolls…which seem to be drawn to the mines in an inexplicable compulsion. The supplement’s 2.0 version has another aspect added – namely that of a vanquished dwarven hold; the mad dwarves may well remain – or at least, their wrath. A motif of ancient grudges thus is added to the already obvious class/race-struggle angle, adding further depth to the settlement. It should be noted that this version does have a magic marketplace, in spite of this being the system-neutral/old-school version – the prices and selection available are adjusted, but it’s something to bear in mind.

Creighton Broadhurst’s second trip to Lanthorn makes an already amazing settlement even cooler in its old-school/system neutral version, though one has to like the somewhat more high-fantasy-ish angle of the settlement. Content-wise, I’d genuinely claim that it is worth checking out for owners of the original pdf. At the same time, I can’t help but feel horribly disappointed by the lack of mechanical representation for the effects of the frickin’ lanterns that grant this place its name. Personally, this would make the pdf a 4-star file for me; however, particularly if you don’t own the original settlement, you should treat this as a 5-star file instead. My final verdict will lock in between both, at 4.5 stars, rounded down.

You can get this expanded iteration of Lanthorn here on OBS!

Please consider supporting my patreon or leaving a direct donation. Every bit helps.