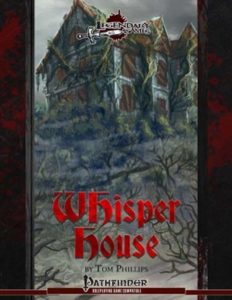 All right, so this is a plug-in for the Strange Aeons adventure path, and it is intended for a group of 8th level characters. The module works perfectly fine on its own, just fyi. Difficulty-wise, this is one of the tougher adventures, and the module features plenty of read-aloud text as well as hyperlinks.

All right, only GMs around? Great! So, the PCs are traveling upstream on a boat on the Sellinar river, when the captain approaches the adventurers with a plea – a hunting party hasn’t returned. As the PCs track the missing hunting party, they are ambushed by degenerate villagers of the blood of Yog-Sothoth – interrogation yields further information, as the locals seem to have abducted the hunting party with the express desire of consuming them. Thus, the PCs make their way to the backwater village, where the PCs will have a chance to fight a deadly degenerate witch and her brain ooze allies – if she manages to escape, there’ll be mi-go hunters on the PC’s trails – in the village, two of the missing folks may be saved from a grisly fate, though the process might pit the PCs against an entire village! (Personally, I think the degenerate 27 villagers would have made for a better troop than individuals, but your mileage may vary here.)

Leaving the deadly village behind, the PCs will have to venture towards the seemingly abandoned Labauve manor  – the manor is caked in dangerous mold, and is actually the site of a family’s rather grisly corruption (and for the most part, demise) at the hands of contact with Yog-Sothoth. The exploration of the mansion makes up the main meat of the module, and features quite an impressive array of unique builds, including a unique urannag living trap, an ettin with heads of two genders,  swarms of eel-things and a grotesque conglomeration of undigested bits granted sentience. The PCs may find an unlikely ally in a unique pipefox variant. Ultimately, the PCs will have to best ratlings, the mad patriarch of the family, and his Yog-Sothoth begat spawn. Interesting here would be the fact that not all mythos-creatures are aligned – the PCs can e.g. make allies of mi-go if they play their cards right – and they’ll need all the help they can get, for a giant spawn of Yog-Sothoth lurks below the manor, where the final member of the hunting party (the others can be found before that) may be saved from a rather grisly fate.

The module includes the blood of Yog-Sothoth CR +1 template, a potent gown for witches, and two new spells, one of which is a summons warm variant.

Editing and formatting are very good on a formal and rules-language level. Layout adheres to the awesome full-color two-column standard of the series, and the module comes with a ton of pretty amazing artworks – all original pieces I haven’t seen before – kudos for that! The cartography in full-color is really nice, but somewhat to my chagrin, no player-friendly versions were included. The book comes with basic chapter-header bookmarks.

Tom Phillips really knows how to write good dark fantasy – the adventure is twisted, flavorful, and the atmosphere the mansion manages to evoke is rather grisly indeed. The amount of unique adversaries is another big plus for this mansion-crawl. Now, personally, I think the module would have benefited from a bit more echoes of days gone, providing hints and visions of the horrid things that befell the manor and the surrounding landscape, for with such an inclusion, this could have served as a rather efficient horror adventure. As provided, this is certainly one of the more compelling and well-crafted mansion-crawls out there. My final verdict will clock in at 4.5 stars, and while the absence of player-friendly maps is a bit of a bummer, I still feel justified in rounding up for this book.

You can get this nice dark fantasy mansion-crawl here on OBS!

Please consider supporting my patreon or leaving a direct donation if you value my work.