Trail of the Apprentice

Trail of the Apprentice 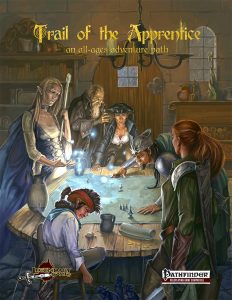 This massive book clocks in at 295 pages; 292 if you take away editorial, foreword, etc.

Now, if you’re new to Trail of the Apprentice: This is basically a campaign that strives to teach new gamers, both players and GMs, the ropes – for Pathfinder’s beginner’s rules or those provided for 5e D&D, it is intended as an experience of the basics of adventuring. Theme-wise, it is a campaign intended for family gaming night and as such is significantly less “dark” or “scary” than some other published modules – as a whole, I believe that kids ages 8+ should not experience any issues in this campaign, unless they are particularly sensitive. Conversely, if your kids are younger and already enjoy reading LotR, Conan or the like, they’ll have no issues here. (Hey, you never know! I’ve been reading since I was very, very young and once I found fantasy books, I devoured them religiously! It all depends and you’ll know best!)

That is not to say that adults can’t enjoy this, mind you – in fact, the campaign works just as well for introducing older players and GMs to the ropes and skills. One more thing: The one big lost chance regarding running this for kids would be that “good” behavior is not really rewarded: Enemies defeated are generally assumed to be killed by the PCs and adding an easy way to subdue intelligent foes and rewards for such a behavior would have added some moral-forming, unobtrusive dimension which I’d strongly suggest a GM implement.

Now, my review is based on the massive hardcover of the book…but there’s one more thing to be aware of: You see, at this point, I have covered all 5 modules in the series in detailed reviews and I’m not a big fan of repeating myself, so if you want a really in-depth break-down of each module, go to my site (if you’re not already there) and click on the “Trail of the Apprentice”-tag of this review (or search for it) and there you go. I assume you’ll be familiar with these in this review.

Now, particularly astute readers may notice that the page count of the modules and this book does not align – there is a reason for that: The module section covers 220 pages, with appendices taking up the rest of the page-count. These include a sheet of paper for notes, a 2-page character-sheet as well as player-friendly versions of most maps, which come btw. with grids. Most maps? Jep, the ruin-maps of module #4 are not included in the appendix (the versions in the module are relatively player-friendly, but copying them from the book wastes 1/2 a page each), there is no player-friendly map of the hexcrawl in module #3 (BOOO!), and, much like in the stand-alone version of module #4, the test-dungeon lacks the numbers for the rooms, but features their names (a nitpick, granted).

Back to the appendices: The first of these would be a gazetteer of the kingdom of Threll on the world of Terralien, complete with an overview map, which, alongside all its information, helps a lot in contextualizing the respective modules – a big plus. There also are a couple of magic items interspersed here, including an amulet that heals you when reduced to 0 hit points, being particularly useful with easily frustrated folks. As a formal complaint, it sports a spell reference that has not been italicized. The second appendix contains a bestiary-section that features 7 new creatures: The CR 2 undead-looking fangbat, the CR 1/2 “imp-lite” foul needler, the whip-using CR 7 maestro fiend, the CR 5 scissor toad, the animated much-being sludgemaker at CR 4, the frightening-looking CR 3 yahldrid-maggot and my favorite, the CR 6 lodmaw: Think of that as a more rocky, oversized tribble with multiple maws and skittering, tiny legs that make it vulnerable to being knocked back: Mechanically the most interesting of them, though what the monsters bring to the table in spite of the limited options of beginner rules-sets is impressive. A bit of a missed chance: The new creatures, with the exception of the lodmaw, which features in adventure #5, do not show up in the adventure-series.

The pdf also has a handy monster-index by page, has notes for continuing adventuring, 7 pregens…and a couple of new rules: The book contains beginner’s box-rules for the alchemist, gunslinger and witch-classes, all of which are presented in a pretty concise manner, taking potential splash-damage frustration into account (and providing an easy solution) and the book provides proper firearm rules. Considering that these are not included in the individual pdfs (alongside all creatures but the lodmaw), that is an argument in favor of this book.

Editing and formatting are good, but not perfect – I noticed a couple of missing italicizations, minor hiccups, etc. Layout adheres to the nice 2-column full-color standard of the series. The book has several nice full-color artworks. Cartography ranges from beautiful (module #1) to serviceable (module #4). The hardcover I have uses matte paper of the usual PoD-level of quality for lightning source.

Paris Crenshaw, with additional design by Mike Welham, Matt Goodall, BJ Hensley and Linda Zayas-Palmer, has crafted pretty much a nice introductory-campaign: From the atomic experience of module #1 to the finale, Trail of the Apprentice represents a solid campaign. Module #3 and #5 in particular can be fun experiences for veterans as well, with #2 being similarly well-made: While easy, veterans tackling it at level 1 instead of 2 will have their hands full with a neat challenge.

As for the intended target demographic, the series does a neat job with the notable exception of the rushed-feeling fourth module and I’d strongly suggest contemplating my suggestion for the finale of the series, if you feel you’re up to the task. I have a tradition of trying to rate books by their intended goal and this series succeeds pretty well at presenting a gradual, easy introduction to the games we all know and love while telling a solid story. This is not perfect, has its minor hiccups, stumbles and unrealized potential. The additional material in this hardcover is nice and well-crafted, but the book does not fix the minor hiccups in the series, so while nice, I feel it’s not enough to warrant a full star bonus. When I add up my ratings for the individual installments and average my rating, I arrive at a final verdict for 4 stars, which mirrors well my thoughts on this – it’s a good series that has a bit of room to improve. Veterans of countless games should probably detract a star, unless they really want a nostalgia trip to their earlier modules. (Not to be confused with hardcore old-school modules…)

That being said, I believe that this fulfills an important task and hope to see more Legendary Beginnings-books in the future. We need more people that play and if this series even made one group play that otherwise wouldn’t have…well, then it is worth it.

You can get the Trail of the Apprentice here on OBS!

While my review is based on the PFRPG-version, you can get the 5e-iteration here on OBS!