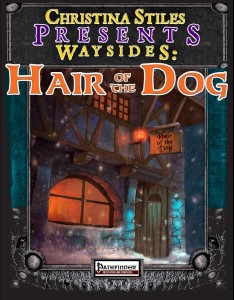 The second Wayside is 10 pages long, 1page front cover/introduction, 1 page SRD, leaving us with 8 pages of content, so let’s take a look, shall we?

“Hair of the Dog” is not only the name of this pdf, but also of the titular hostel provided in the pages of this pdf. Situated in a mining town or similarly rough and tumble area, this hostel…actually is a nice place to be -from brews to lizard meat, the fare offered is actually not only edible, but even rather nice-tasting – just take a look at the menu provided for the place in the pdf! And that in spite of being led by a hard-working (!!!) gnoll-family, seeking to make it as a business, just hustling through the days and contending with what can arguably be considered racist jokes. (Hair in the soup…)

The owner, his slightly more aggressive wife and their three children are all accounted for in the pdf, as are two sample guests with surprisingly complex statblocks. We also get nice hooks, a serviceable b/w-map  -and, rather cool, I hope this becomes a staple: Information on what teams  according to the Ultimate Campaign-rules can be hired! Two thumbs up for especially that small, but useful addition! Have I mentioned the adventure hook that would see the gnolls framed for a barbarism they did not commit?

Editing and formatting are top-notch, I didn’t notice any glitches. Layout adheres to SGG’s 3-column landscape format and the pdf comes fully bookmarked for your convenience. Artworks are thematically fitting stock and the b/w-cartography is serviceable, though no number-less player-friendly version is included – in this case, I won’t hold that against it.

Christina Stiles has written a supplement here that features tender sympathy for the NPCs herein, a winking, subtle humor and  overall, a place that might actually become the PC’s favorite haunt – alien, yet familiar, this supplement manages to evoke a sense of compassion and sympathy from the reader, all while providing ample potential for conflict and addressing complex issues of acceptance while providing a chance for the PCs to be GOOD by ways other than slaying humanoids. After visiting this place, slaying the hyena-folk in the wilderness will never be the same again – and for achieving that while not making gnolls a joke or victims, Christina Stiles deserves just 5 stars + my seal of approval.

You can get this uncommon, cool offering here on OBS and here on d20pfsrd.com’s shop!