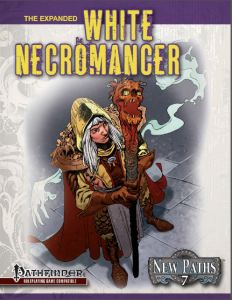 The latest installment of Kobold Press’ New Paths-series is 17 pages long, 1 page front cover,  1 page editorial, 1 page SRD, 1 page advertisement, leaving us with 13 pages of content, so let’s take a look, shall we?

So…this is it. Ever since its initial inception in Kobold Quarterly, the White Necromancer by Marc Radle has been met with laurels and I admit to having waited for it for quite some time. That being said, in the meanwhile, Zombie Sky Press’ Sacred Necromancer has delivered a solid, if not always perfectly balanced take on the class as well – so can the White Necromancer stand its ground or has it become redundant? Let’s see!

After a short bit of aptly-written IC-narrative, we delve into the meat of the class: White Necromancers get d6, must be non-evil (d’uh!), get 2+Int skills per level, proficiency with simple weapons (no armors and shields – arcane spell failure), 1/2 BAB-progression and good will-saves as well as full spellcasting of up to 9th level. Spellcasting is handled via cha and thus also spontaneous.

White Necromancers get Eschew Materials at first level and are surprisingly not restricted from casting evil necromancy spells, but the respective spells use two slots when being cast – interesting balancing there! They also add wis-mod to all Knowledge-checks pertaining death and the undead, burial rites etc. and  get +1/2 class level to heal skill checks. As a signature ability at 1st level, they also get the option to Rebuke Death as a standard action, which translates to healing living creatures by touching them for 1d4+1 per two class levels 3+Cha-mod times per day. Yes – ladies and gentlemen: An arcane healer that is effective without stealing the divine caster’s thunder. Nice…at least at low levels. At higher levels, a more rapid scaling of healing would very much be in order.

At 3rd level, the class may also Turn Undead 1+cha-mod times per day and is treated as having channel energy, but ONLY for the purpose of turning the undead. Adding on further channeling feats is also mentioned. Now starting at 4th level, the class actually gets its signature ability – White Necromancy.

Undead creation-spells cast by the White Necromancer no longer count as evil and the resulting undead are free-willed, if intelligent, and of the same alignment as the White Necromancer – and as a crucial difference to regular undead: They are not slaves. To make them perform a task (even mindless ones), requires a diplomacy-check on behalf of the White Necromancer – and while I can hear some groans, I do think that’s valid – interrupting someone’s eternal rest should be no laughing matter and require some finesse. As you may have gleaned from the cha-focus and now diplomacy – white necromancers actually make for pretty good party leaders as written.

At 5th level, the class gets perhaps one of its most iconic abilities with Life Bond (Su): As a standard action, the White Necromancer may create a bond between him/her and one living creature within 90 ft. Each round at the White Necromancer’s turn, each bonded creature (of which the White Necromancer may have up to class level active at once) is healed by 5 Hp if they’ve been damaged for more than 5 hp below their maximum hp, while the white necromancer siphons his/her life into them. Now this ability seems weaker on paper than in play – the tactical options it offers are significant and beyond that, the ability mirrors well the duality between life and death as well as lending itself to great potential for heroic sacrifice: We’ve all been there, the villain is almost vanquished, but it becomes readily apparent that she/he/it will take on PC down with it – with a solemn smile, the white necromancer can now make the conscious decision to give his/her life to give the PCs just that edge to survive. And this potential for drama, ladies and gentlemen, is awesome! This theme is btw. further enforced at 7th level, when the white necromancer may sacrifice up to 10+con-score+class level hp and transfer them via touch to an ally.

Speaking with the dead and blindsight that sees only the living and the undead also tie well with the concept of a spiritual person aware of the balance between life and death. At 11th level, damage-dealing skeletal arms erupting from the ground make for a more macabre form of attack and at higher levels, turning incorporeal and warding against death effects further enforce the theme of the class, with the capstone making the white necromancer hard to kill indeed and offering a lesser power word: kill – as a supernatural ability.

Now the class gets its own spell-list that takes the released Paizo-books so far into account and features a couple of, you guessed it, new spells; 6 to be precise. Bone shards (and its greater version) would be offensive spells that deal bleed damage beyond the piercing damage, whereas bone swarm allows you to conjure forth bones and direct them to move towards foes and pummel them into submission. Chains of Bones allow you to initiate ranged combat maneuvers (grapple, disarm, trip) and dance of the dead temporarily animates corpses to attack foes, but at a temporary cost to your life force. Finally, you now may erect Walls of Bones. It should be noted that all spells are NOT class-exclusives, but also available for other arcane classes.

We also get two new feats: Necrotic Spell allows you to  make undead count as humanoids for the purpose of a spell at +1 level (and you have to think only for a split second to get the vast implications of this for once useful Metamagic Feat!) and the second metamagic feat, Siphon Spell, allow you to use lesser spell-levels to power high level spells, allowing for more control over your spells and adding quite an edge regarding versatility to those casting via it. Nice! Two out of two metamagic feats herein actually have a reason to exist – that’s more than I can say about the vast majority of their brethren!

Now next up would be two new archetypes, first of which would be the Necrotic Healer, who not only gets increased healing capabilities, but may also, much like Forest Guardian Press’ excellent Direlock class, take negative conditions from others to suffer from them. Unlike teh Direlock, though, the Necrotic Healer needs to suffer a certain base amount of rounds from them and may not redistribute them to foes. However, since the ability does not specify otherwise, White Necromancers may, in theory, even take permanent conditions upon themselves – not sure whether I’m comfortable with the repercussions there, but complaining here is a nitpick at best. At 9th level, the Necrotic Healer may a limited amount of times per day reflexively take the wounds of allies incurred by spell or blade upon him/herself, making for a more powerful option for the heroic angle.

Now Grave-Bound, the second archetype herein, nets the character an undead companion: These undead companions cannot be turned or controlled by others, are intelligent and there are some lavishly detailed choices here: Mummy, Skeleton, Zombie, Shadow, Ghost and even Vampire are potential options for your undead companion, all with their own advancement tracks. Furthermore, Grave-bound get a kind of minor semi-apotheosis into undead. One gripe: The Zombie-companion feels a bit weak and has an error in its 20th level advancement, where its 2d8 slam-attacks mysteriously regress to 1d12.

Editing and formatting are very good, I didn’t notice any significant glitches that would have hampered my ability to understand this pdf. Layout adheres to Kobold Press’ rather nice two-column full-color standard and the original piece of cover art is duplicated on a gorgeous one-page spread. The pdf comes fully bookmarked for your convenience.

Death is as important as life – and I’m not waxing philosophical here. Look up simulations of mortal versus immortal populations and you’ll realize why – the presence of death drives one to excel, to cherish life – turns out immortal ennui actually has a scientific basis. But I’m rambling – the white necromancer as a scion of the balance between life and death works exceedingly well as a class and actually does not compete with Zombie Sky Press’ “Sacred Necromancer” – instead, we get a shepherd of souls, an advocate of the dead that. The White Necromancers fills its niche and fills it well – though I do have one complaint – I wish more had been done with the hp-redistribution factor, which imho makes for the most interesting part of the class, but oh well – guess you can’t have everything.

When all is said and done, the White Necromancer succeeds at the task set for the class and should make for an interesting addition to your game, one that only misses the full 5 stars only by a margin, since personally, I would have enjoyed a tad bit more unique tools for the class. Still, an excellent offering worth of 4.5 stars, rounded up to 5 stars, omitting my seal of approval only due to the impression that the undead companions of the Grave-Bound could use some tweaking, the minor glitches and me longing for a tad bit more to be done with the condition/hp-distributing options.

You can get this awesome class here on OBS!

P.s.: If you can hunt it down, get the 3rd edition city supplement “Hollowfaust” if you require inspiration on how a city of necromancers of varying alignments could work – it’s a mechanical disaster, but fluff-wise glorious.