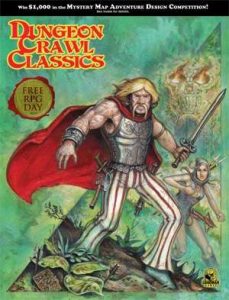 This collection of modules clocks in at 20 pages, 1 page front cover, 1 page introduction/SRD, 2 pages mystery map contest (here, you could finish a map and write an adventure to win money), 1 page advertisement, 1 page back cover, leaving us with 14 pages of content, so let’s take a look!

This booklet contains 2 adventures: Michael Curtis provides “The undulating Corruption” for level 5 characters, while the second module, “The Jeweler that dealt in Stardust” is penned by Harley Stroh and intended for level 3 characters. Both of the adventures sport a handy encounter table that lists the respective encounter type. The second page provides a fantastic b/w-handout that depicts the adventure location of the second adventure. The cartography also deserves mentioning: The first module gets a top-down map, while the second sports a gorgeous, isometric b/w-map…though I do wish it came with a player-friendly version…or in pdf-format, at least as a layered image, so I can turn off the room numbers, cut it up and hand it out. It still kinda works for that purpose, but, at least to me, the lack of a player-friendly map is a downside.

This review was requested and sponsored by one of my patreons. The review is based exclusively on the pdf-version, since I do not own the print version.

All righty, as always, this is an adventure review – as such, the following text will dive into heavy SPOILER territory. Players wishing to play these modules should jump ahead to the conclusion.

So, “The Undulating Corruption” is pretty much a straightforward sidetrek, one that should sport a wizard PC currently suffering from a corruption, for that is the primary angle: Hidden away in hilly terrain, there is the Crucible of the Worm – a shrine that ostensibly can cure corruptions! But as the PCs approach the crucible’s location, a massive explosion shakes the earth…well, turns out that, for once, other adventurers and not the PCs have screwed up, big time. Provided the PCs manage to defeat the self-reproducing black sludges there, they can find the sad and doomed survivor of the adventuring group – the poor sod is beyond saving, but he can fill in the blanks: The crucible contained an entity of chaos, the Night Worm consumes corrupted wizards and excretes them, free of the taint – but the entity is free, hungry and potentially very dangerous.

A trail of black slime slows magical pursuit (unless you want to hasten the game), and thus, the PCs are on the trail of a massive, very dangerous entity: In order to catch up with the Night Worm, the PCs will have to cross a river without falling prey to corrupted catfish; soon thereafter, the PCs may recruit a cleric, who can provide help or even accompany them…and pretty soon thereafter, the PCs catch up with the massive entity and its corruptive beasts. The final adventure locale is intriguing: Within the insides of the massive worm, the PCs find an extradimensional place; there, the worm’s digestive system, the degenaphages, may attack…but they also provide the means for being cured: Spellcasters can attach an umbilical cord; if they are lucky (and feed the entities with spell-energy, enhancing the chances) they can shed a corruption…get out…and stop the worm before it carves a trail of destruction through the lands. Very unique sidequest!

The second adventure, “The Jeweler that dealt in Stardust” is basically a heist: Boss Ogo, one of Punjar’s notorious fences, hasn’t been seen in a month. His place seems rife for the picking, right? Well, unbeknown to the PCs, Ogo has been touched by Ygiiz, the Spider-Mother, via a crystal. He has managed t lure agents of the dread thing from the vast beyond. Meanwhile, his second in command and the gang members are loyally guarding his house – which is, as noted before, represented in a phenomenal b/w-artwork/handout. Unless the PCs are VERY careful, the guarding rogues will call for backup, following the PCs…which may well result in nasty consequences.

Speaking of smart approaches: If the PCs act in a clever manner, they may well enter the house via a less conspicuous manner – and find the hanging, webbed and bandaged bodies that act as anchors to the carnivorous spiders conjured forth. Eliminating these ritualistically prepared bodies (and yes, PCs can find that out!) immediately makes the module much easier…but also announces the presence of the PCs. Then again, that would be a pity – the magical spiders have actually multi-stage attack routines, which is pretty fun! Assuming the PCs manage to pass the strange spider-things, Ogo’s traps and provided they aren’t slain by their own shadow (which may be animated by a deadly candle), they will have a chance to stop Ogo…and potentially have their mind sundered by the crystal themselves. On the plus side, the PCs can find the eponymous stardust – its use may not be evident at first, but it can provide a one-time luck increase…oh, and yeah, it can be used to create more of those mind-shattering crystals…but who’d want that? Anyways, at the very latest once the PCs escape Ogo’s home, they’ll still have to contend with the ambush of aforementioned ruffians. Yeah, the module is potentially pretty difficult, unless the players act smart…which is just how I like it.

Editing and formatting are top-notch, I noticed no issues in formal criteria or rules-integrity. Layout adheres to a nice 2-column b/w-standard and the b/w-artworks and maps by Doug Kovacs are phenomenal. The absence of player-friendly versions for the maps in particular is a pity here. The pdf comes with basic bookmarks.

Michael Curtis and Harley Stroh deliver two amazing little adventures here. The two modules ooze sword and sorcery flavor. The modules are dangerous and unique in concept, and while the first one is more of a sidetrek than anything, it gels well with the “Quest for it”-aesthetic of DCC. Both modules can imho be used in other rule-sets with relative ease; the crunchy bits don’t dive into the depths of the rules per se; they don’t have to. In short: This is a great offering and one that made me curse under my breath that I didn’t manage to get it in print. That being said, for the pdf version in particular, player-friendly map versions would have been greatly appreciated. Apart from this, I can’t really find serious flaws within the modules; they hit their intended tone pitch-perfect. Hence, my final verdict will clock in at 4.5 stars, rounded up due to in dubio pro reo and the amazing, little heist that btw. makes for a fine convention-style game in length and density.

You can get these neat adventures here on OBS!