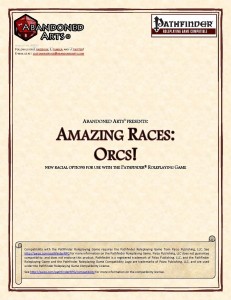 We kick off this pdf with 6 new racial feats: Blood Scent lets you apply Smell Fear to bleeding creatures and allows you to smell creatures in the throes of fear at twice the range. Now “Knuckle-Dragger” is a cool feat, but a huge can of worms – by bounding on hand and feet, you get a +10 ft. bonus to land speed -seen that one before. Where things get ugly is with the caveat that you may serve as a mount. Don’t get me wrong, I get why this is an awesome idea, but with the mounted combat rules as they are, this presents an enormous issue: Beyond obvious action economy questions (and the fun for the orc-player), questions arise regarding the qualification of being a mount for e.g. halfling cavaliers etc. Don’t get me wrong, for some campaigns, this feat rocks – in others, it creates quite a panorama of problematic questions. Orcish Toughness has synergy with Ironguts and Ironhide, increasing its effectiveness, which is nice since it makes these two more valid. A feat for Orcish Weapon Mastery is okay, I guess, in that it closes a hole in the rules. Expending 4 rounds of rage to regain one use of improved iron will is neat, while Squalid Pestilent is just cool – it makes you immune to diseases, but only those whose DC is below your con-score and also increases the potency of diseases you carry or inflict. “Puny pink-skins die of flaky skin.” Awesome!

We also get 6 new racial traits, with brute force allowing the orc to choose one of 3 dex-based skills, always treat it as a class skill and using str instead of dex with it. Perhaps a bit strong, but okay. Decreasing non-metal ACP by -2 is nice, while gaining proficiency with all simple weapons feels redundant for just about all characters, but oh well. +2 Hp, +1 to fort saves versus diseases and nauseated/sickened conditions and choosing one trick from Orcish Weapon Expertise to use 1/day is neat.

Alternate Racial trait-wise, we may replace ferocity with smash as a bonus feat and weapon familiarity with +5 HP in the negative – nasty!

The orcish war-drummer is a bard with less class skills and skill ranks per level, but instead of the regular inspire courage, they may incite orcs to receive the effects of boiling blood or make those with the rage ability rage for free for 1 round and enter the rage as an immediate action. Cool! Instead of versatile performance and well-versed, the war-drummer gets two-weapon fighting and may use bludgeoning weapons to smash the drums – neat!

Editing and formatting are very good, I did not notice any significant glitches. Layout adheres to Abandoned Arts’ no-frills two-column standard and the pdf has no bookmarks, but needs none at this length.

Author Daron Woodson provides quite an array of cool options herein and, while not all of them work flawlessly and while I would have wished the war-drummer had more unique abilities and was more complex, the overall appeal of both archetype and some of the unconventional choices herein did win me over. As mentioned above, some of the options may be a tad bit strong for the most conservative of campaigns, but overall, I see no reason to penalize the pdf overtly for it. The mount-feat is a can of worms, but for the right campaign utterly awesome. Thus, my final verdict will clock in at 4.5 stars, rounded up to 5 for the purpose of this platform.