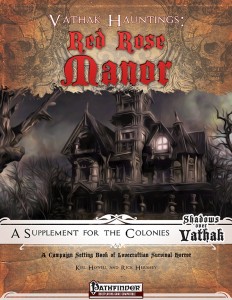 This supplement clocks in at 9 pages, 1 page front cover, 1 page editorial, 1 page ToC, 1 page SRD, leaving us with 5 pages of content, so what do we get?

Well, first of all, we get a short run-down of the background story of red rose manor – when a grove of dryads bit off more than they could chew, a rather nasty wizard cut down their trees and made them into the very wood that was used to construct red rose manor. If your PCs are wise, they’ll be doing leg-work before entering such a place – if they botch their gathering of information, they may hear a kind of wrong rumor, whereas exceeding the DC provides secret, additional information.

The haunts herein range from CR 6 to CR 8 and generally, they do one thing exceedingly right – each haunt tells a part of the story. You see, what I like about haunts, why I adore them so, can be summed up easily by the means in which they can enhance a story – unlike most traps and hazards, haunts, by their very design, are supposed to be means of indirect storytelling, miniture exposition dumps, if you will – and the pdf gets this right.

When a door whispers seductively to partake in wine, the instance tells a part of the story and ties in with a sequel haunt that is directly associated with the wine itself. When a miniature tree turns out to be the cut of legs of a dryad, planted and created into a kind of facsimile tree via the utmost care, one can taste the madness that consumed the man behind the tragedy. Chests and drawers made from pieces of dryads, with bodies contorting in the wood, doors with wooden knots that once were eyes, narcissism-inducing eternal fireplaces, rugs of woven dryad hair that reflect the despair they felt. The final haunt has a rather unpleasant, but not lethal effect as well – though one that actually managed to chill me: A dominate effect suggesting that the creatures ought to plant themselves – but with what further repercussions? Yes, slowly starving with feet embedded in the earth would be the obvious consequence, but still – I would have liked at least a suggestion here.

It should be noted that some of the haunts actually can be tricked.

The pdf also provides suggestions for 4 optional “encounters” – these can probably be likened to suggested set-ups for related encounters.

Editing and formatting are good, but not perfect – I noticed a couple of grammar glitches and the like. Layout adheres to Fat Goblin Games’ beautiful 2-column full-color standard and the pdf has a gorgeous front cover artwork. The pdf comes with rudimentary bookmarks.

Were this a piece of fiction, I’d bash it to smithereens. No, seriously – this pdf is hard to review for one simple reason: Structurally, it is awesome. The haunts make ample use of interesting spells that thematically fit, admittedly to the point where I would have liked unique effects and modifications for the haunts itself.

The haunts themselves sport interesting imagery and this would be Kiel Howell’s triumphant strength – he *gets* indirect storytelling via haunts. And he can craft utterly disturbing vistas – seriously, I have read a lot of horror supplements and when such a humble pdf can still elicit a reaction from me, that’s when you realize that the imagery the respective haunts evoke is AWESOME.

The creative, imaginative potential, the one component that cannot be learned, is there. At the same time, though, the pdf has one massive issue – the prose simply isn’t that good. As awesome as the set-pieces of the haunts and their interaction are, the prose linking them feels clumsy at times and did detract from the awesome imagery in places – take this sentence from the set up: “Their souls are bound to the wood, forever reminded of their failure to protect their trees, their failure to trick and enslave the wizard Renald Houssman with fake love, and their failure to move on in death.” Sure, not bad, but far, far from the awesomeness of the concept “Here’s a door that has the friggin’ EYES of dryads, disguised as knots, set in the wood.” At the same time, the haunts and their concepts are glorious, but the set-ups do somewhat detract from them. The good news here is that writing more compelling prose can be learned and is a matter of experience and practice.

To sum it up -super concepts and glorious imagery are slightly bogged down by prose not 100% up to the imaginative potential herein. Slightly more defined and varied mechanical effects would have been nice to see as well. In the end, this is an inexpensive collection of cool, thematically linked haunts, which any DM worth their salt can craft into one chilling module. While not perfect, it made me look forward to future offerings in the product-line as well as excited to see how Kiel Howell’s writing improves – for his twisted mind definitely has a knack for conjuring up some chilling imagery. My final verdict will clock in at 3.5 stars, rounded up to 4 for the purpose of this platform.

You can get these haunts here on OBS and here on d20pfsrd.com’s shop!
Endzeitgeist out.