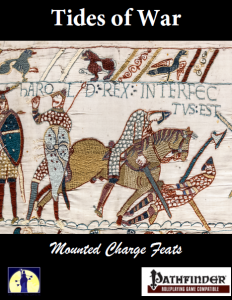 Flying Pincushion Games has regrouped and is back with a 6-page pdf, 1 page front cover, 1 page editorial, 1 page SRD, leaving us with 3 pages of content, so let’s take a look!

After a brief introduction, we are left with the premise of the pdf and the content – essentially, we have here feats for mounted characters that elect NOT to use a lance – which is pretty much the only truly efficient option as per the default rules, so let’s take a look at those feats!

-Driving Hammer: Adds an AoO-less bull rush when using a hammer in a mounted charge and hitting the target. To my pleasant surprise, the feat gets interaction with e.g. mighty charge right.

-Toppling Flail: Works pretty much like Driving Hammer, but for flails and aligned with the trip manuever instead.

-Staggering Flail: Like Dazing Hammer, but for flails and adds the staggered condition for 1 round one a failed save. Note how staggered/daze have different values as far as detrimental conditions go and that stagger + trip = something akin to daze, but slightly below it regarding action economy. This is VERY fine-grained balancing done right – the combined effects of maneuvers + feats even out perfectly.

-Sickening Blade: Sickens targets hit by a mounted charge executed with heavy blades for 1d4 rounds if the target fails a save that scales with your BAB.

-Nauseating Blade: BAB 10+ follow-up-feat; adds 1 round of nausea before the 1d4 sickened rounds.

Editing and formatting are top-notch, I noticed no glitches. Layout adheres to an elegant two-column full-color standard and the pdf actually sports some pieces of beautiful full color art. The pdf has bookmarks, but they are called “blank page” – not bad at this short size, though.

I’m so happy. For the first time after reading a Flying pincushion product, I can say “Get this!” – If you’re like me, you’ve always been annoyed at the fact that there are next to no options for non-lance-charges while mounted and this pdf delivers just that – with unpretentious, well-balanced, diverse feats that make mounted charge weapon selection something other than a non-choice. With this pdf, the choice matters and adds a tactical dimension to the fray. I have NOTHING to complain here – Frank Gori and Mark Nordheim did a great job and one that exhibits some very precise balancing within the feat-groups. This is one of the humble pdfs that really surprise me with their cool bits and pieces -get this for all those mounted warriors if you’re fed up with barbarians that attack with lances. I’d love more of these feats, perhaps signature tricks for specific weapons, not just weapon-groups in a sequel? Anyways, my final verdict will clock in at 5 stars + seal of approval – congratulations!

You can get this collection of feats here on OBS!