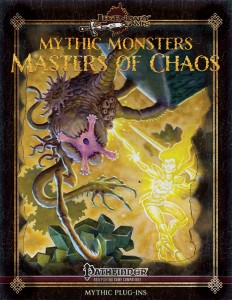 This installment of the Mythic Monsters-series clocks in at 30 pages, 1 page front cover, 2 pages editorial, 1 page ToC, 1 page SRD, 2 pages of introduction, 2 pages advertisement, 1 page inside of back cover, 1 page back cover, leaving us with 21 pages of content, so let’s take a look!

As always, we kick off this installment of the Mythic Monsters-series with a supplemental piece of content – this time around with a massive, neat piece of fiction that works rather well to get you in the mood for the things to come….which would be chaotic outsiders of various shapes and sizes, first of which would be the Bralani Azata at CR7/MR 3. The first thing you’ll notice here, is that the layout has been streamlined, making it slightly easier and crispier to process – so kudos for that. Ability-wise, bralani can shoot merciful arrows and instill charms via their arrows, powered by mythic power. Reflexive healing as they drop to 0 hp via mythic power also fit nicely alongside the wind-themed abilities. Neat one! At +1 CR, lillends can sequester targets in focecages and use finale-themed SPs as immediate actions – and they can charm those constricted – once again, I like the emphasis on nonlethal damage. The CR 16/MR 6 Ghaeles get immunity-bypassing gazes and better bursts of light – however, the winnder here would be the mythic power-based strobe-form, which is a true beauty – complex and unique, it is glorious. Finally, the CR 3/MR 1 Lyrakien not only receives a beautiful full-color illustration, they may also ease the exhaustion of the weary traveler and set up a kind of combo alarm/teleport, while also blowing foes asunder va blasts of starlight Solid, neat low-level build.

Of course, these guys aren’t the only CR 3/MR 1 creatures herein – the voidworms, again, with a GLORIOUS unique artwork, receives not only full rules for acting as a familiar, it also receives a rather awesome, versatile trick that allows for reach manipulation and short-range teleportation – think of it as spatially flexible. I love this critter! There are more proteans – the CR 8/MR 3 Naunet is a beauty – these guys receive the option to engulf foes in a second form consisting of roiling protoplasmic mass and making coalescing masses of chaotic vapors in concert are great and the melee-enhanced, freedom of movement-suppressing tail slap is awesome as well. Imentesh (CR 12/MR 5) also receive this tail-ability, but more importantly, they can unleash deadly warpwaves and shape them via mythic power. Additionally, telepathic babbling and madness-inducing mindlinks render this one awesome. Speaking of which – the CR 21/MR 8 Keketar, lavishly rendered in a glorious piece of original artwork feature a nasty debuff aura that can entangle and deal random attribute damage. Furthermore, these proteans. Creating things from thin air, generating quasi-real mirage arcana and countering teleportation via temporal stasis – all cool, but they pale beyond the awesome imagery of a dimension door blended with deadly black tentacle-like strands of frayed reality.

There also are non-protean/azata creatures within these pages – the CR 8/MR 3 chaos beast, for example – a relatively linear, ironically so, progression of the base creature. Solid, but not special when compared to aforementioned creatures. The Crayhound, CR 6/MR 2, also sports one stellar rendition, deadly criticals , thunderbolt-like barks – and they are impossible to constrain – neat mid-level creature! At one CR less, the Zentragt may eat metal to heal themselves and shred armor asunder. Okay, I guess.

The low-level CR 4/MR 1 Pards may temporarily phase out, damaging creatures it passes while in this state – a cool low-level ability!

The new creature herein clocks in at CR 5/MR 2 and sports the glorious artwork also featured on the Mythic Mini #50’s cover – the Crassodovs are deadly lupine killing machines – these humanoids have been bred by elves on a distant material plane to exterminate dwarves – and while said world has been torn asunder, rifts infusing the crassodov with their odd power, the race can exhibit its full loathing of all things elven for the imposed servitude in murderous rampages. Hunters and slayers, Crasodov are glorious and interesting -and manage to bring something new to the table, in spite of their conservative imagery. Their psychology is definitely exceedingly interesting, making them great catalysts for certain types of stories.

Editing and formatting are good, I noticed no significant glitches apart from some minor formatting hiccups here and there. Layout adheres to Legendary Games’ nice two-column full color standard, streamlined and developed further – and for the better. The artworks by Bob Greyvenstein, Christopher Kimball, Chris McFann and Rian Trost are not only original and beautiful – there also are A LOT of them to be found here, signifcantly more than the usual 2 pieces of great artwork the series sports – so production-value-wise, one step up! The pdf comes fully bookmarked for your convenience.

Jason Nelson, Todd Stewart, Alistair Rigg, Jonathan H. Keith, Mike Welham – a lot of authors, a lot of creativity, and it shows – with the notable exception of the comparatively lame chaos beast, just about every creature herein is inspired, unique and fun, with azata and proteans receiving abilities that help unify them identity-wise, while still maintaining a racial cohesion, tenuous though that has to be for these chaotic critters. I’m not going to rant longer – this installment of Mythic Monsters is great and ranks among the best in the series- well worth 5 stars + seal of approval.

You can get this awesome installment of mythic adversaries here on OBS and here on d20pfsrd.com’s shop!
Endzeitgeist out.